Liverpool picked up their latest defining win of the season on Thursday evening, with several individuals shining in the 2-1 win at Wolves.

The Reds faced one of their most challenging games of the campaign, heading to Molineux to take on Nuno Espirito Santo’s dangerous side.

Jordan Henderson powered Liverpool in front with header from a corner, but Sadio Mane‘s first half injury affected the visitors’ rhythm.

Raul Jimenez finished off a flowing counter-attack to make it 1-1 after the break, only for Roberto Firmino to win it with a superb late finish.

Jurgen Klopp‘s men are now 16 points clear of Man City with a game in hand, as this staggering season continues.

Here we compare our player ratings with those from the Liverpool Echo, the Mirror, the Evening Standard, FotMob and the TIA readers. 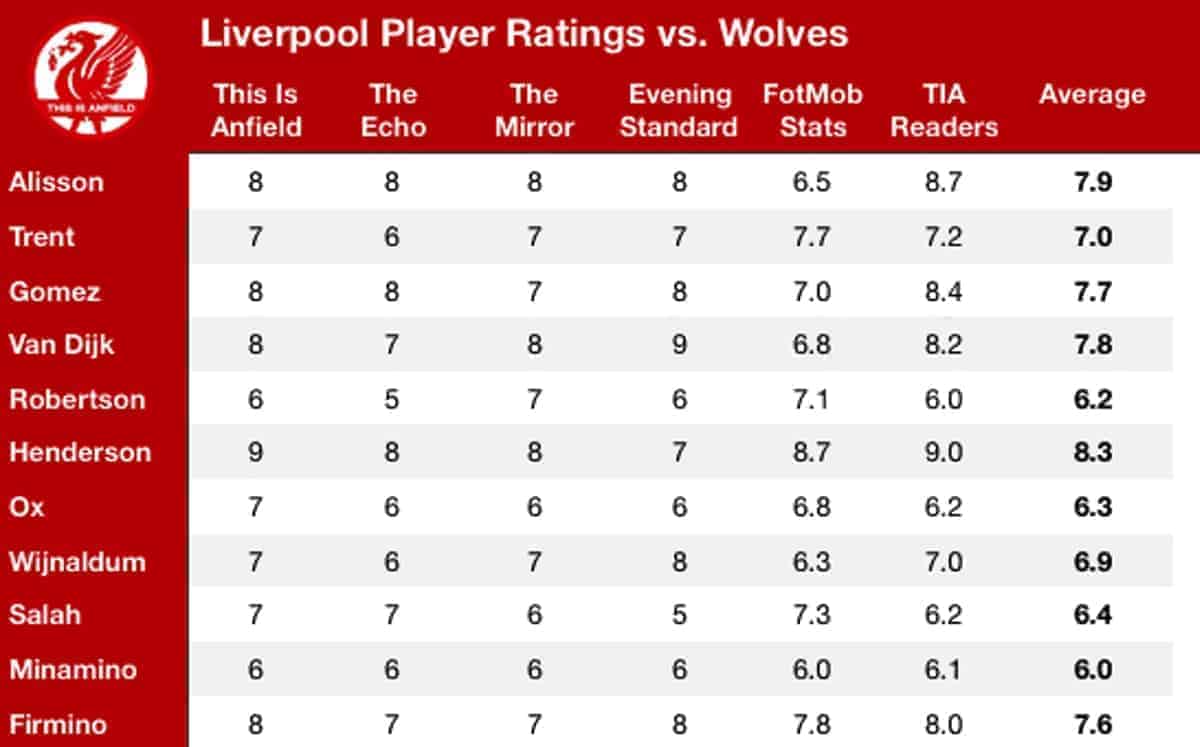 It was Henderson (8.3) who earned the highest average rating at Molineux, after producing another dominant showing.

The skipper not only led by example with his all-round quality, but he scored the opening goal and teed up Firmino (7.6) for the winner.

The Echo‘s Ian Doyle highlighted some “vital challenges in midfield” from Henderson, as well as his “calm presence of mind” in the lead-up to Firmino’s strike.

Alisson (7.9) was next up, on a night when he showed why many regard him as the world’s leading goalkeeper.

TIA’s Henry Jackson praised “big saves to deny both Adama Traore and Jimenez,” while FotMob picked out the Brazilian’s 97 percent pass completion rate, with much of his distribution immaculate.

The incomparable Dutchman received the Man of the Match award from David Lynch of the Evening Standard, who said his speed is “vital to the high line Liverpool hold.”

Jackson, meanwhile, thought Gomez “improved immeasurably as the game went on,” with a “vital block” standing out after the interval.

Premier League debutant Takumi Minamino (6.0) got the lowest rating, but in fairness, this was an extremely difficult game to be thrown into.

Up next for Liverpool is their FA Cup fourth-round clash away to Shrewsbury Town on Sunday evening (5pm GMT), as Klopp shuffles his pack and gives key men a rest.