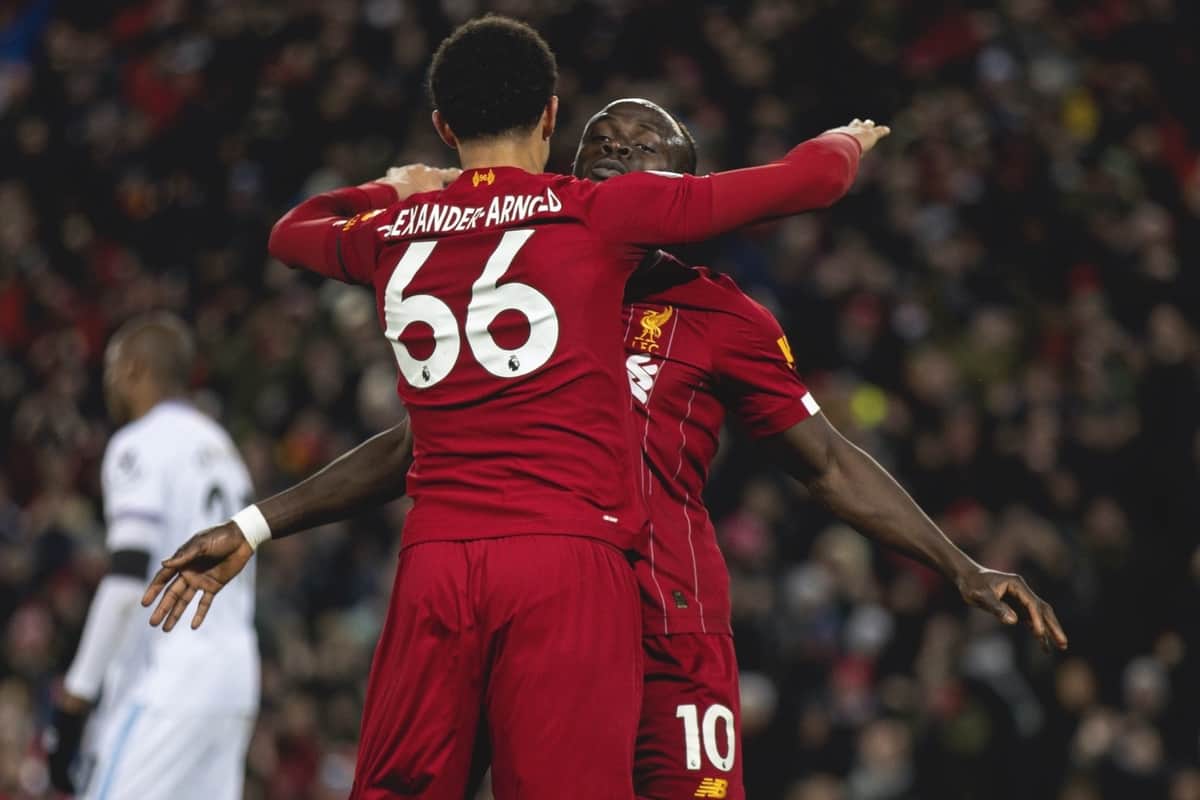 It was a case of celebrating a shared fighting spirit for the Liverpool squad after their gritty 3-2 win over West Ham.

After having navigated the league with a staggering efficiency in recent months, the Reds went behind in the Premier League for the first time since November.

It was a performance treated like a training exercise early on as Liverpool were lacking the intensity and potency required to put the result beyond doubt after Gini Wijnaldum steered the Reds into the lead.

Issa Diop and Pablo Fornals had found the net for West Ham on either side of the interval to put Liverpool into unfamiliar territory on home soil, ensuring everything was left to do as the game moved into the final half-hour.

And as they so often have, Mohamed Salah and Sadio Mane were the ones to land on the scoresheet as Liverpool’s never-say-die attitude once again came to the fore to move Jurgen Klopp’s side to within 12 points of the title.

A man pivotal to the result was Trent Alexander-Arnold, who set up both the first and last goal in the game with two exceptional pieces of play to take his assists tally in the league this season to 12.

And the right-back, when speaking to LFCTV after the game, was disappointed as Liverpool shipped two goals in a league game for the first time since December in the 5-2 win over Everton and once again conceded from a corner.

The performance provided more lessons for the Reds to learn and the 21-year-old was quick to acknowledge that while a “perfect team doesn’t exist,” Liverpool still need to strive to consistently be at their best:

“It’s the Premier League, these things happen. We’re not happy that we conceded two goals and that’s two games in a row we’ve conceded from a corner, so we need to look at that.

“We’ve got things to learn, we’re not the perfect team. The perfect team doesn’t exist, every team has weaknesses and we need to try and be as good as we can be.

“We needed to stay high as a team to make sure our centre-halves were going up and winning it instead of the centre mids.

“But overall we were quite confident in the game, going 2-1 behind is probably when doubt started to creep in but when you know you’ve got the talent we’ve got then goals can come from anything.”

And the winning goal was set in motion by Trent failing to give up on the play as he teed up Mane from close range to notch his 12th league assist in just 27 appearances, a tally equal to last season’s return in 29 games.

It was a total which broke the record for the most assists in the Premier League by a defender, and now he is out to surpass his previous feat in the remaining 11 games:

“I’m obviously happy to help the team as much as possible. My aim this season was to get over 10 again this season and as the season’s gone on it’s trying to push the limits and break as many records as I can.

“I want to push myself as far as I can, help the team as much as possible and keep trying to get assists, goals and contributions – and obviously clean sheets first and foremost.

“Going forward I’ll try and get as many assists as possible and hopefully try and push on and break the record.”

Following the final whistle, the players took to social media to celebrate their hard-fought comeback which once again opened up a 22 point lead at the summit.

For Virgil van Dijk, who captained the side in the absence of Jordan Henderson, it was nothing short of an “eventful evening” and one which provided a timely reminder not to “take anything for granted”:

?3 points, after an eventful evening. Don’t take anything for granted ? ?

It was all about the “mentality monsters” for Wijnaldum and Mane as they put another three points in the bank:

YESS!! ? Glad to contribute with a goal but REALLY happy we pulled off the win! #MentalityMonsters ???? Massive thanks for the support ?? #YNWA

Andy Robertson added to his assist total after setting up Salah’s goal and was full of praise for the Reds’ “grit” and ability to fight until the final whistle.

While Henderson, who took his place behind the dugout due to a hamstring injury, was eager to shower praise on his side as they once again “found a way to win”:

Grit, determination, character. We always fight to the end!!

Kept going till the end and found a way to win! ?? #YNWA

There was a lot of love for Anfield, after stretching the unbeaten streak in the topflight on home soil to 54, and Mane for Trent:

And finally, James Milner, while withdrawn from the matchday squad due to a slight muscle strain, was quick to commend another “big win” as both Trent and Joe Gomez were singled out for their decisive actions:

Big win ?? Never in doubt it would end up in the net as Joey G lined it up from 30yards on his left peg ? #findaway #trenton?? #ynwa

The result not only matched Man City’s record of the most consecutive wins in the topflight (18) but also equalled the club’s longest-ever winning record at home with 21.

Another set of remarkable numbers for a season which has consistently seen the records books rewritten, and the Reds will now turn their attention to Watford on Saturday where a chance to claim the former as their own is on the line.