Keeping yourself entertained in a lockdown when there’s no live football on is a whole new experience.

I’m writing this after watching an 80-second video of an Italian cat saving shots taken with a full-sized football in a hallway, even though he’s only got little arms.

It was impressive stuff, but he didn’t catch a single ball and the question remains of whether he can do it at Empoli on a mild Wednesday night in September?

Then there are all the memes that are doing the rounds on WhatsApp. Like the one of Wayne Rooney sat at table homeschooling with his lad saying ‘you’re doing really well, dad’.

Speaking of Bluenoses, a mate of mine resorted to watching a video of Everton‘s greatest Merseyside derby wins at 9.30am on Thursday. I texted him at 10.15am to see where he was up to? ‘Dion Dublin is just showing the stairs leading up to the bedroom,’ he replied.

It’s also great to see Liverpool’s players doing their bit on social media. I don’t know about you, but watching Gini Wijnaldum doing keepy-ups with a toilet roll was particularly fascinating.

I mean, who on earth has a toilet roll at home? And does Gini get home deliveries or has he been queuing at his local Tesco by practising the same social distancing Barcelona used when marking Divock Origi from corners taken quickly last season?

It probably won’t be long before New Balance have their logo on those bog rolls—until Nike Air Wipes take over—and surely it can’t be long until Nivea get James Milner to film a hand-sanitiser video at home?

His goal-line clearance against Bournemouth last time out in the Premier League was worth the transfer fee Liverpool paid for Milner alone, but what we didn’t know was that we were also getting was a social media genius.

The ability to laugh at yourself is the most important laughter of all and Milner has absolutely owned the @BoringMilner parody Twitter account by repeatedly extracting the urine out of himself.

Had plenty of time to think about this… here’s my #isolationXI – let me know who would make your squad… #dadjokeseverywhere pic.twitter.com/zIQ3TedkrH

Rationing Yorkshire Teabags for the week, levelling his lawn with a ruler and pair of kids’ scissors, sharpening 22 pencils so they’re the same length and setting up an isolation XI in his garage featuring two lamps, a dog lead and bottle of ketchup doesn’t exactly sound funny, yet each of Milner’s self-deprecating videos genuinely are.

Irrespective of what he contributes on the pitch—and the new two-year contract he signed in December was excellent news—every dressing room needs personalities, characters and leaders like Milner.

It’s a while ago now, but the last time I interviewed Milner I asked him about the responsibility of taking penalties. He could not have been more unequivocal about wanting the pressure, wanting that responsibility, desiring that important role. It was both reassuring and impressive to hear.

That he also turned up at Anfield for the FA Cup replay against Shrewsbury, when the rest of the first team were on their winter breaks, and gave those young Liverpool players a pep-talk and advice also says a hell of a lot about him.

When Milner does eventually hang his boots up, probably in about 2031 at this rate, I’d have him on the Liverpool coaching staff in a heartbeat.

He’s the most experienced active Premier League player—his next appearance will put him fifth on the all-time list alongside the late Gary Speed—but crucially he also has the right kind of personality to be a future coach or manager. 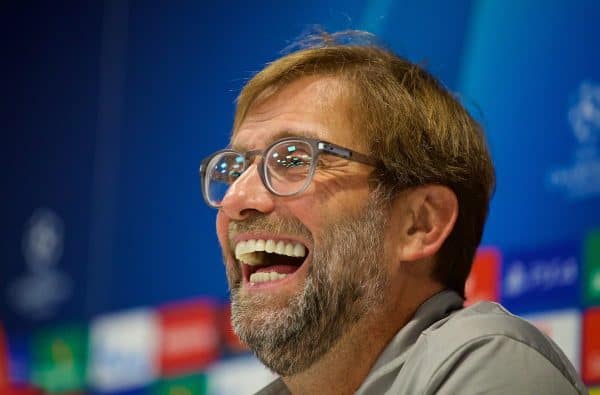 Whether he can complete the TikTok #PlankChallenge like Alex Oxlade-Chamberlain did on his stairs with girlfriend Perrie Edwards is another matter, but perhaps my favourite lockdown revelation is Jurgen Klopp admitting he tried to do it himself.

“I didn’t cut the grass, but I tried the dance of Ox!” Klopp told the official website. “Not as bad as you probably think! It’s very important in these times that we all show we take this situation seriously, but we are human beings.

“At the moment we are at home and when you are at home, you cannot do something to help outside. We are not health workers, we don’t work in a supermarket. You have to keep your own mood up and you have to keep the mood up for other people.

“If the boys do anything on Instagram, as long as it’s in a legal frame I’m overly happy about it—it just shows they are still cheeky and all that stuff. I like it, I like it a lot. I like the lineups they do. All these things are really funny. It’s good.”

At a time when every news update seems to be bad news, that is exactly the kind of thing I want to be hearing from the Liverpool manager: we are in desperate times, but stay positive. Stay at home, but have fun while you are in lockdown.

It’s a far better way to spend your days than doom-surfing, waiting for the latest tragic coronavirus updates or incessant—and usually unfounded, but agenda-based—stories of what will happen next to the Premier League season when it is still far too early to say.

Anyhow, that’s enough from me for this week. I’ve got an Instagram video of a gloveless Alisson washing his hands to catch up on…

Chris McLoughlin writes for This Is Anfield each week; he’s also senior writer for the Official LFC Matchday Programme and LFC Magazine, which is still being published during the coronavirus outbreak. Subscribe here for home delivery.