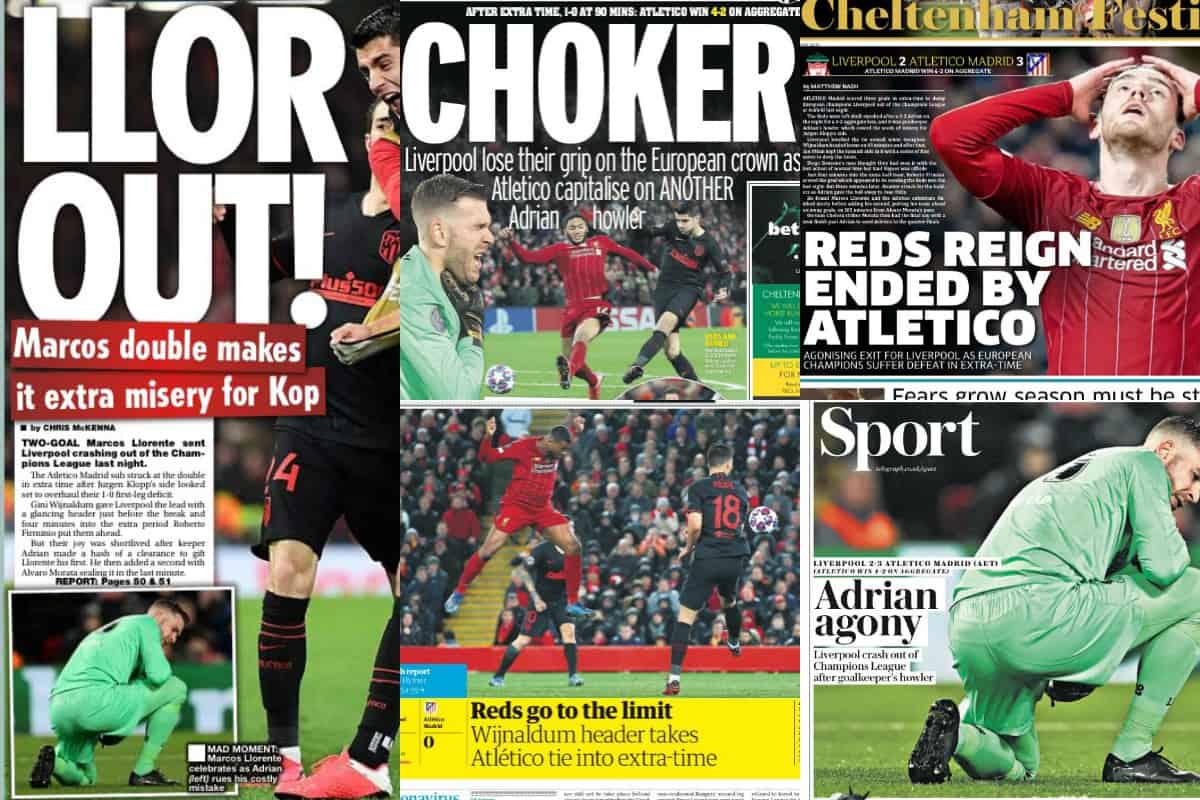 The media pinned Liverpool’s Champions League exit on Adrian and wasteful finishing, and think the Reds are now facing an “anticlimactic” to the season.

The Reds’ defence of the Champions League trophy was ended by a smash-and-grab performance from Diego Simeone’s side.

A disastrous extra-time proved Liverpool’s undoing, in which Adrian gifted Atletico tie-changing away goals and left the Reds paying the price for countless missed chances.

It was a disappointing way to lose crown of European champions and it’s now all about bouncing back and finally claiming that glorious Premier League title as soon as possible.

This is all the key analysis from the media on Liverpool’s Champions League exit.

BBC Sport’s Phil McNulty wrote as such, pinning the game-changing moment on Adrian’s error in contrast to how Jan Oblak kept Atletico in it:

“This game was, in many respects, a tale of two goalkeepers.

“And so it proved, Liverpool’s morale and fighting spirit disappearing visibly after Adrian‘s mistake.”

“Jan Oblak already has a reputation as one of the world’s best, and the Slovenian cemented it here with a one-man show.

The Mirror’s James Whaling lauded Oblak’s display and stated that the Atletico stopper is Alisson’s main contender for status as the world’s best goalkeeper:

“Liverpool would have been out of sight if it wasn’t for Jan Oblak in the Atletico net. He made a string of brilliant saves to keep his side in the tie and showed just why he has established himself among the world’s elite.

“Liverpool have their own keeper who can stake a claim for being the best in the world – unfortunately he wasn’t in goal tonight – but Oblak is surely one of his most serious challengers for that accolade.”

The knives were out for Adrian, and the Independent’s Mark Critchley wrote how this non-performance was a reminder that he is not of the level for a team competing for the top honours:

“There has always been a nagging, gnawing sense that Adrian is still a backup acquired on a free transfer, arriving late last summer after plenty of others had passed on the opportunity to sign him, released by West Ham, no less.

“He has never truly escaped that reputation and could not here.”

ESPN’s Mark Ogden put Liverpool’s cup eliminations squarely at the feet of Adrian, and feels the Spaniard is to blame for an ‘underwhelming’ end to the season:

“But the best teams are only as strong as their weakest link and Liverpool have now been knocked out of two competitions in the space of eight days because their back-up goalkeeper is nowhere near as good as their first choice.”

The Independent’s Miguel Delaney explained how Alisson’s injury came at the worst possible time, as the Reds faced crucial games in the FA Cup and Champions League:

“Alisson Becker’s injury looks to have been especially timely for Liverpool, and may well have cost them the chance at an even more historic season than a record title win – if it actually finishes.”

Ogden reckons that if Alisson was fit for those crucial cup ties, Liverpool would still be challenging for a historic treble:

“But had he [Adrian] been more capable, or if Alisson had been fit, Liverpool might still be chasing three trophies this season. As it stands, they have just one left to win.”

Meanwhile, Jones jumped to Adrian’s defence, insisting that the Spanish goalkeeper has proven himself to be a good deputy overall this season:

“No player sets out to make mistakes, especially not in such a high-stakes contest. And expecting a free transfer to be as good, and as reliable, as the world’s finest ‘keeper, is unfair.

“Adrian is not Alisson, he’s his deputy. He’s been an able one too, for the most part.” 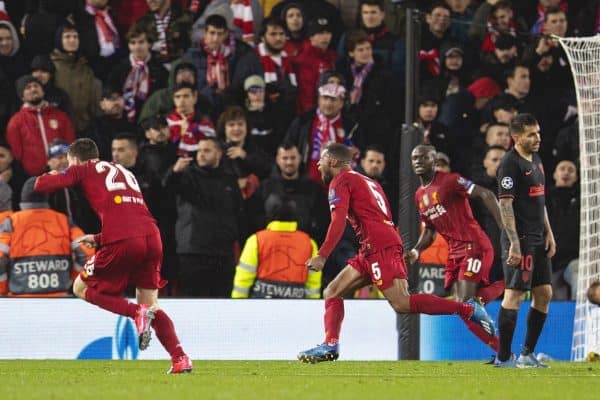 The Liverpool Echo’s Ian Doyle thought Jurgen Klopp’s side were excellent, and labelled the display “one of the finest” of the campaign:

“It was all so unnecessary, with Klopp’s side having posted one of their finest performances of the season to finally grind down the grizzled Atletico defence and seem on course for the quarter-finals.”

ESPN’s Liam Wheeler thought Liverpool could hardly have done anymore, noting how both individual and the collective performance excelled in “an almighty display”:

“After a tense opening, Liverpool took the tie by the scruff of the neck in an almighty display.

“Alex Oxlade-Chamberlain, Trent Alexander-Arnold, Mohamed Salah and Sadio Mane all shone in an utterly dominant performance – in normal time at least – that threatened to blow the visitors away, and would have done if not for one remarkable goalkeeper.”

Paul Gorst, also of the Liverpool Echo, rightly pointed out that this was no defensive masterclass from Atletico Madrid, who progressed through luck rather than judgement:

“This was no defensive masterclass, it was backs-to-the-wall, fly-by-the-seat-of-your-pants stuff for virtually the entirety of the game.”

The Mirror’s David Maddock thought the power of Anfield outshone Atletico’s effort at the Wanda Metropolitano and felt it stunned the Spanish side into a nothing performance:

“Yet as Metropolitan(o) as the Wanda is (see what I did there), it is not Anfield. Not a patch on the febrile occasion that is a primal Anfield European night. Even in bitter undeserved defeat as they tasted here, it is alive.

“Diego Simeone’s side are technical players, some of the best in La Liga, yet even the basic functions of passing deserted the Madrid side at times…and the cause without doubt was that mind-blowing, brain-mangling noise.”

Reflecting on the standout performers, James Nalton, for Football365, was most impressed by Gini Wijnaldum and Alex Oxlade-Chamberlain:

“Liverpool played some of the best football they have in some time and were buoyed by two excellent performances from their more advanced midfielders, Alex Oxlade-Chamberlain and Georginio Wijnaldum.”

At the same time, journalists felt the Reds only had themselves to blame for exiting the competition…

Doyle summed it up well, writing that it was a case of Liverpool losing the tie, rather than Atletico winning it:

“All so very, very unnecessary. And that’s what will hurt the most for Liverpool. They lost this rather than Atletico winning it.”

Whaling said that even though Oblak had a fine game, Liverpool’s finishing was simply not clinical enough:

“This should have been so, so comfortable for Liverpool.

“Even without the brilliance of Jan Oblak, the Reds were uncharacteristic in the number of times they missed the target altogether.”

Andy Dunn, of the Mirror, believes Liverpool will kick themselves for allowing the game to get to extra-time when they should really have been out of sight:

“What will be particularly galling is that the match should never have gone into extra-time, such was the welter of opportunities created by the Premier League champions-elect.”

The Guardian’s Barney Ronay made an interesting point, pondering whether Atletico’s reputation as defensive warriors caused a mental block that prevented Liverpool from finding the killer goal:

“Perhaps the Atlético aura played a part. There had been a sense before tonight of mild overkill, a feeling the surrounding noise had turned Atlético into something monsterish, a bunch of footballing Visigoths here to wipe their great muddy boots on the Axminster.

“In reality Atlético’s only away Champions League clean sheets in the last two seasons have come against Lokomotiv Moscow and Club Brugge.”

Meanwhile, the Mail’s Martin Samuel credited Atletico for showing resilience to somehow hang on, and felt the stark contrast in styles of the teams made for a brilliant tie overall:

“If every team played like this it would be tiresome; but Atletico Madrid are uniquely Machiavellian in an era when the best coaches wish to be liked for the beauty of their football.

“This was a rearguard action, no doubt of that, 11 men packed into a depth of 30 yards when Liverpool attacked.”

Ogden assessed that elimination from the Champions League – and the FA Cup – takes the gloss off and makes this a “successful season” rather than a “remarkable” one:

“While winning the Premier League title will unquestionably make this a successful season at Anfield, it promised so much more when they travelled to Madrid for the first leg of this Champions League tie three weeks ago.

“They will win that, but one major trophy doesn’t quite feel enough for the remarkable season Liverpool have had.

McNulty feels there is now an anticlimactic feel to the season, but assessed it has still be an “outstanding” campaign:

“And yes, there will be a sense of anti-climax that they could only reach the last 16 in defence of their crown – but to suggest this bitter loss takes a heavy layer of gloss off Liverpool’s campaign when it does eventually end is a nonsense.

The Guardian’s David Hytner also dismissed such claims, insisting that this exit takes nothing way from a “phenomenal season” which will see the Reds win a first league title in 30 years:

“They are set to secure a first Premier League trophy since 1990 in the coming days or weeks and, in time, that will feel like the most important detail of a phenomenal season.”