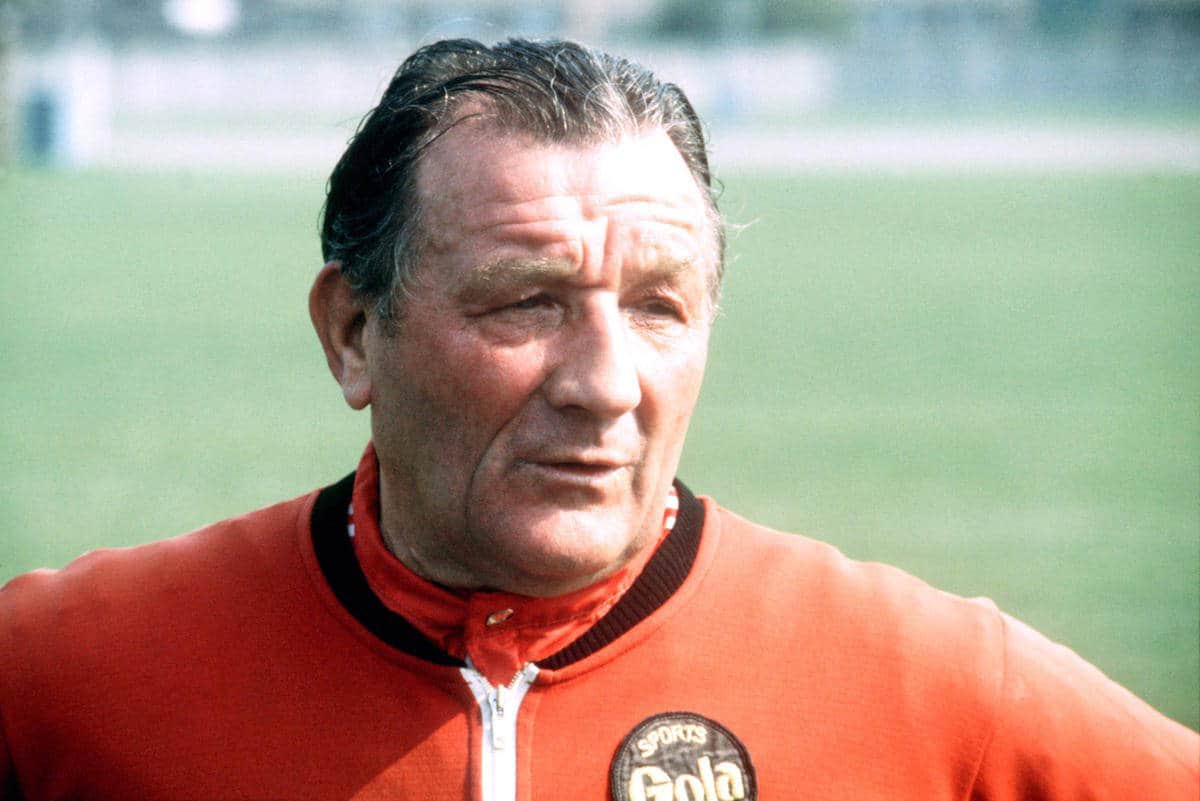 Liverpool won six of their 18 top-flight titles in the 1980s, but the start of the decade had the club in need of an overhaul that saw Bob Paisley pull off an all-time comeback.

The calendar year of 1981 was a complex one for Liverpool FC.

Crowned European champions for the third time by defeating Real Madrid in Paris, they also won their first League Cup, requiring a replay to see off a talented, star-studded but Second Division West Ham.

From one extreme to the other, however, Bob Paisley’s side struggled throughout the year for league consistency.

A bright start to the 1980/81 season was unravelled, in part, by an unprecedented injury crisis, which left Phil Neal as the only player to end the campaign as an ever-present.

Meanwhile, the new 1981/82 season was beset by poor form and the escalating dismantling of the team that had dominated English football at the end of the 1970s and at the dawning of the 1980s.

It was nothing short of mid-table form, and when Man City picked off a rare success at Anfield on Boxing Day—inclusive of a horribly conceded spill by new goalkeeper Bruce Grobbelaar—it left Paisley’s side sat 12th, nine points adrift of the league leaders, John Toshack’s Swansea City.

Summer had brought the beginning of change.

Ray Clemence left for Tottenham, at his own instigation, while Jimmy Case was sold to Brighton as part of a two-way transfer dealing that saw Mark Lawrenson travel in the opposite direction.

By January 1982, Ray Kennedy had moved on to Swansea, having played his last game for Liverpool in Tokyo against Flamengo, in a sobering 3-0 defeat in the Intercontinental Cup shortly before Christmas.

David Johnson, another integral member of the Liverpool team over the course of the previous three seasons, had struggled for form and Paisley had begun to consider a long-term replacement for Terry McDermott too.

Before 1982 had ended, both would be playing their football with clubs they’d starred for earlier in their careers; Johnson at Everton, McDermott with Newcastle.

With Phil Thompson dispossessed of the captaincy partway through the season, and now with Lawrenson looming over his place in the team, the winter months of 1981/82 represented the biggest sweeping alterations Paisley ever made as Liverpool manager.

Up until this point, every change he made had largely been circumnavigated within a system of evolution.

Paisley’s winter of discontent was as close as he ever came to a Liverpool revolution.

Within this tumultuous first half of the season, Liverpool had not only lost the Intercontinental Cup and seen the backs of Clemence, Case and Kennedy, but they had laboured into the quarter-final of the European Cup when made to sweat by AZ Alkmaar.

A slow start to the campaign had included two defeats and only one win in their first four league games.

Added to this, Kevin Keegan inspired Southampton to a 1-0 victory at Anfield in November, a month after a demoralising loss to Man United in front of the Kop.

Then came the nadir, when beaten by Man City on Boxing Day—a day when not only the game was lost, but also the self-restraint of one spectator on the Kop, who struck Joe Corrigan on the head with a bottle after Grobbelaar had conceded his third goal of a bleak afternoon.

In response, the more benevolent collective of Liverpool supporters implored the perpetrator be thrown out and chanted a suggestion that Corrigan should be playing for England.

When United had walked away from Anfield with the three points in late October, it meant that Liverpool had won only three of their first 11 First Division fixtures, while the visitors were able to not only gloat over the result, but that it was a win that put them top of the table.

Despite the on-pitch disintegration, the biggest blow of the formative months of the 1981/82 season had come at Broadgreen Hospital on September 29, when Bill Shankly died.

As Liverpool moved into the new year, there seemed little in the way of positivity in the air.

The bottom of the barrel had, however, been unwittingly reached, and an enforced 10-day break from league action did Paisley’s side a massive favour.

Five league wins on the bounce made it a happy new year for Liverpool, a run in which they scored 16 and conceded only one. During this spell, the first two rounds of the FA Cup were also navigated.

New energy provided by the blossoming of Ian Rush and Ronnie Whelan had finally begun to grip the rest of the squad. Grobbelaar’s early run of mistakes became fewer in number, while Craig Johnston started to gain more game time.

Wonderful fluency returned to Liverpool’s football and, having been written off in the wake of the loss to United in October, by early February they had eaten up a significant amount of ground not only on Ron Atkinson’s expensively assembled pretenders, but also on Bobby Robson’s Ipswich Town.

A 4-0 league win over Ipswich was sandwiched by both legs of the League Cup semi-final against the same opponents. Suddenly, Wembley loomed large and a way had been found into a competitive race for the title.

An ominous figure to other teams, it came as a relief to the rest of the contenders when Liverpool went out of the FA Cup at Second Division Chelsea, swiftly followed by a league reversal at Swansea.

While the wheels were immediately reattached with convincing victories over Coventry and Leeds, it still didn’t stop Liverpool suffering a shock home defeat to Brighton and the returning Case just seven days prior to the League Cup final.

Frustrations spectacularly taken out at Stoke in the midweek, the Brighton game would prove to be the last time Liverpool would taste domestic defeat in 1981/82.

At Wembley, Liverpool overpowered Tottenham and their former ‘keeper Clemence, in a game in which Whelan rescued his team from an impending League Cup final loss with an 87th-minute equaliser.

Too strong for the talented team from White Hart Lane, during extra time Whelan scored again, while Rush claimed his first beneath the famous twin towers.

Glory snatched from the jaws of defeat at Wembley, four days later Liverpool contrived to relinquish their hold on the European Cup, with a last-eight exit in Sofia against CSKA.

Placed fifth, seven points behind the leaders Southampton but with four games in hand, locked in a race for the title that in mid-March saw eight teams still harbouring a realistic vested interest, Liverpool had 15 games in which to make their new combination of experience and youth tell.

Not one point dropped at home from thereon in, Liverpool’s hardest tasks lay away from Anfield, navigating trips to Everton, Man United, Man City, Southampton, Arsenal and Tottenham.

A resounding derby-day win at Goodison set the pace and revenge victories were also picked off at Old Trafford, Maine Road and The Dell, as those pre-Christmas Anfield wrongs against United, City and Southampton were righted.

They were particularly emphatic at Maine Road, while the win down on the south coast was arguably the game of the season.

As their rivals wilted under the pressure, Paisley guided his team to the brink of the title, partly thanks to hard-earned draws at Tottenham and Arsenal.

When Tottenham came to Anfield, seven days before the north London side headed back to Wembley for the FA Cup final, Liverpool knew a win would clinch what had appeared on Boxing Day to be a title win most improbable.

In a 90-minute microcosm of the season Liverpool came from 1-0 down, after a thunderous opener from Glenn Hoddle, to score three second-half goals of power and style, inclusive of another 87th-minute strike from Whelan—this time as the final flourish, rather than a game-saver.

Title won by Liverpool with one game to spare, United—having been anointed champions-elect by journalists when they won at Anfield in October—trailed in third, nine points adrift.

Out with a swathe of the old and in with an influx of the new, Paisley’s final gift to Liverpool in terms of trophies came a year later, but a more valuable one was his 1981/82 restructuring of a team that was in danger of falling into regression and maybe even decay.

Paisley’s actions of the winter of 1981/82 didn’t just ensure that he ended his spell as Liverpool manager with a flurry of honours, but they laid the foundations for the club to continue its domination for the remainder of the decade.