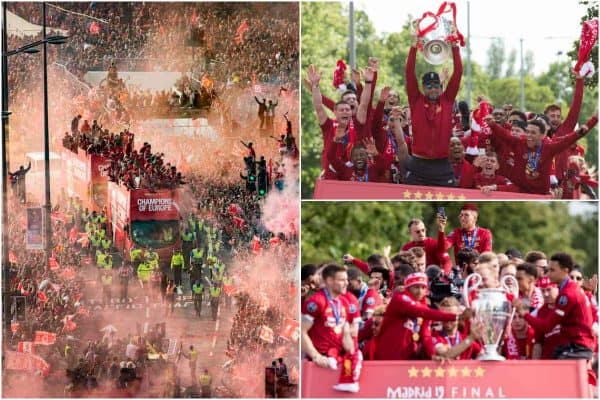 Today was set to be one for the ages as Liverpool paraded their 19th league title through the streets of Liverpool with up to a million fans watching on.

But with football on hold and the Reds’ title bid in a six-point limbo since March, we thought we would take a short trip down memory lane and reminisce on the incredible scenes which awaited Jurgen Klopp’s men upon their return from Madrid.

This year’s parade was to come the day after the final game at Newcastle and was set to be one to savour, with Reds congregating from all across the globe to celebrate a 30-year wait for the title finally coming to a close.

And while the last few weeks and months have made it clear that football, as Klopp says, is “the most important of the least important things,” it is certainly within your right to lament what could have been.

What many had visualised for Klopp and Co. for the inevitable title celebrations will not come to fruition during the current climate, and to help ease some of the heartache why not re-live one of the greatest days in Liverpool’s recent history.

Following Liverpool’s triumph against Tottenham in Madrid on June 1, fans quickly scrambled to make their way to the city to welcome back their European Cup-winning heroes.

For many, players included, little to no sleep came their way as they celebrated a triumph 14 years in the making.

The scenes starting at Allerton Maze and ending on The Strand were ones to behold, with fans of all ages finding any vantage point they could to catch a glimpse of the open-top bus, from traffic light poles, road signs, bus stops, balconies and roofs.

As early as 11am, fans had already started lining the streets almost five hours prior to the start of the parade – with fans mingling and sharing stories of their evening watching the Reds lift No. 6 – the excitement and anticipation palpable.

The iconic scenes started with Liverpool arriving at John Lennon airport with Ol’ Big Ears in tow as the team touched down on home soil, where an incredible four-hour open-top bus tour was to follow.

An estimated 750,000 people gathered in force, with scarves in constant motion and the team and fans readily serenading each other as the bus crawled through the streets, which included a personal serenade to Robbo from Klopp who had precariously positioned himself at the back of the bus and Gini Wijnaldum dropping his phone off it and having it thrown back at him in perfect condition.

For all involved it was an emotional experience, from Alisson’s tears of joy to Ulla Klopp, Jurgen’s wife, climbing on top of a bin to obtain a greater vantage point, to the manager himself and his touching words.

“I cannot really describe it because I cried a little bit as well because it’s so overwhelming what the people are doing,” Klopp said during the parade.

“When you have direct eye contact and you see how much it means to them, that’s touching to be honest. It’s brilliant.”

Just look at the tears on Alisson’s face, as he experiences the emotional scenes at the parade. Arguably one of our most important players this season. I love this guy. pic.twitter.com/Z9HphPaGOG

What. A. Feeling. ?? #YNWA pic.twitter.com/CoqUuGEHts

The moments and memories from June 2, 2019, will live long in the memories of all those associated with the club and for Virgil van Dijk it was an experience which was hard to put into words:

“It’s amazing, it’s something special. You have to really experience it. It’s unbelievable what it does to the city and obviously to the club as well. I’m very proud to be sitting on this coach and hopefully, we can have more days like this.”

While the Premier League triumph of 2019/20 will be one such day held in the future, there is no reason this side cannot, as Virgil said, have many “more days like this” in the years to come to make up for what should have been on May 18, 2020.

The parade reached a joyous crescendo as fireworks and flares awaited Liverpool when they turned onto The Strand for the final stretch of their journey, scenes which will forever be etched into memories and the club’s history.

The scenes which welcomed the team exemplified how incredible Liverpool’s support truly is, with the fans giving everything in return for the team having left no stone unturned throughout the season.

It was a momentous day for all involved as the Reds celebrated being champions of Europe for the sixth time in the only way we know how, together with a massive party.

Here’s hoping it will not be too long until it is safe to do it all over again. Up the soon to be Premier League champion Reds!