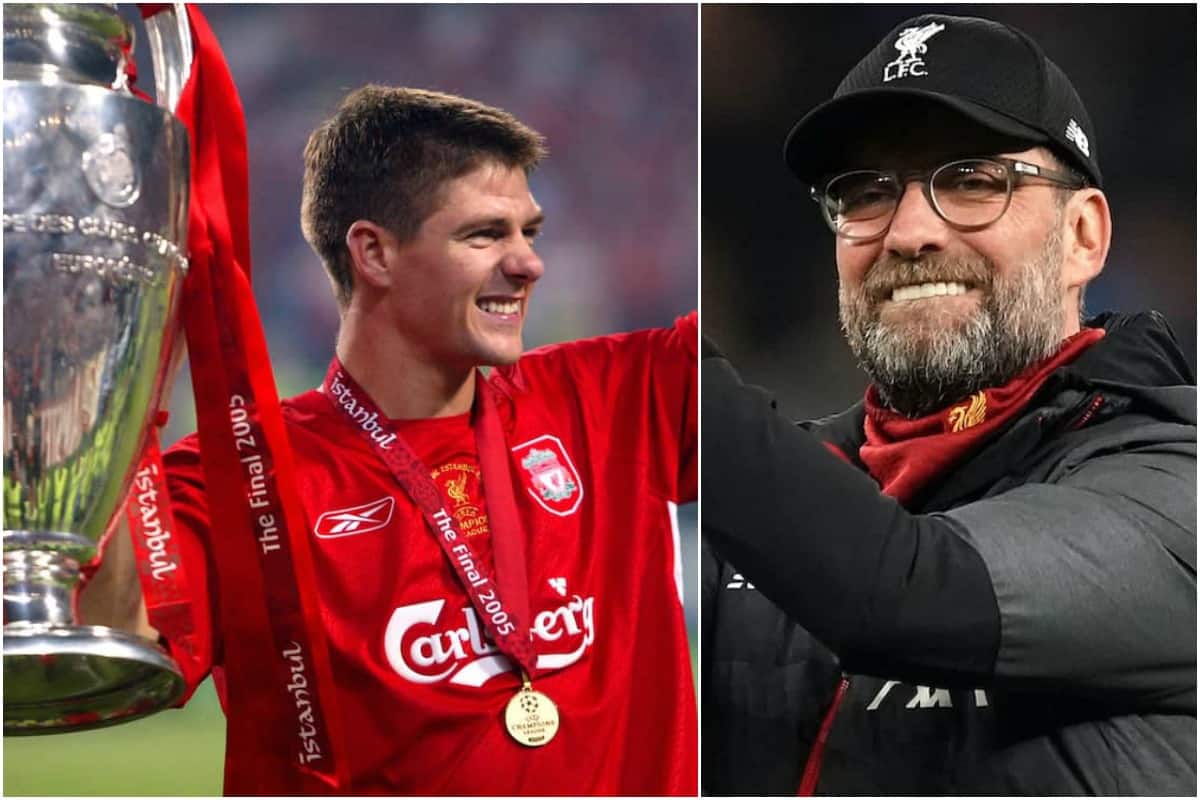 A modern-day revisionism of players in the days gone by often sees Steven Gerrard front and centre, but how would his skills be best utilised in Jurgen Klopp’s setup?

Great players whose careers are so inextricably linked with one big club will never quite receive the blanket recognition they deserve. This isn’t necessarily a bad thing as rivalries are good for the game, but representing certain sides will always lead to less acceptance in some quarters.

There will be some recognition across divides, perhaps most famously observed when Ronaldinho of Barcelona received a round of applause following a display of sorcery at the Bernabeu, but the Brazilian was a one-off and represented the enchantment the game of football can provide in its purest form, rather than any particular club.

In England, those divides are drawn stubbornly, and even though the likes of Paul Scholes, Frank Lampard and Steven Gerrard will attract some general admiration, there will always be a ‘who was better?’ narrative (the answer is Gerrard).

A new kind of criticism of these players is based on highlight videos and a search for retrospective data and stats, rather than having watched these players regularly for 90 minutes across a number of seasons and, therefore, not getting the opportunity to see how good they were when they were doing nothing.

In this time of no football, revisionism has been a popular pastime and Gerrard has been one of the players most regularly put forward for judgement.

Modern analysis tends not to like the low percentage plays often executed by Gerrard while expected goals (xG) data threatens to eradicate the wondergoal altogether, but the best players can execute against the odds and, thankfully, still do so to this day.

Place Gerrard in today’s game and it’s likely he would immediately find a key role in the 4-3-3 systems used by Jurgen Klopp and Pep Guardiola, in a manner not dissimilar to one of the best midfielders playing the game at this moment in time. 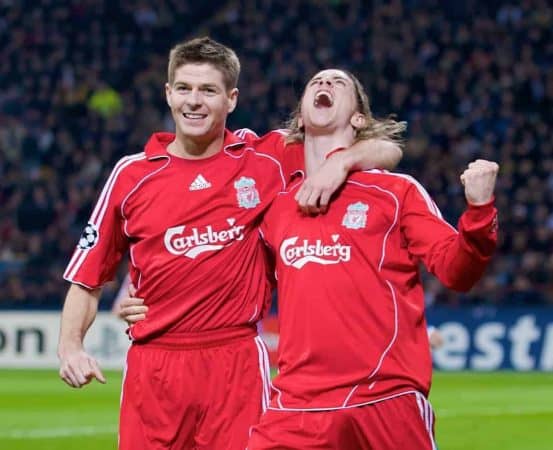 Is there really that much difference between the types of player roles and shape in the teams Gerrard played in and those used by Klopp and his Premier League challenger Guardiola today?

After all, it was only six years ago that Gerrard himself was part of a title-challenging Liverpool side that occasionally lined up in a 4-3-3. But there are differences, as evidenced by Liverpool’s huge improvement in recent years under Klopp.

Everything is more organised and this manifests itself in the way teams press. Gone is the sporadic closing down of the Brendan Rodgers era and in its place is a disciplined, blanket press.

Gerrard’s attributes lend themselves more to pro-active defending rather than re-active defensive duties, such as protecting a back four.

Looking back on Gerrard’s career, it’s fairly easy to see which position he would play in Klopp’s side. 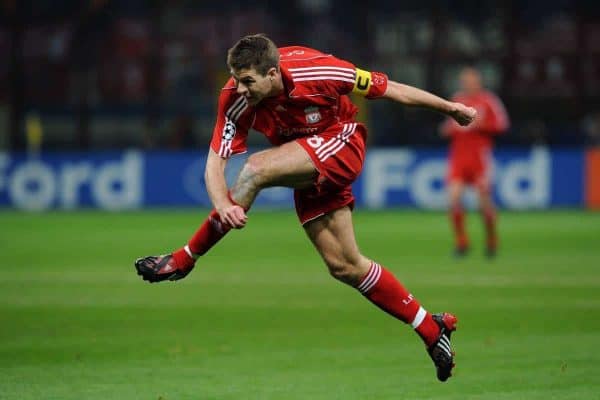 Any problems around finding Gerrard’s best position during his playing days weren’t due to him being bad in any of them. He could have excelled in any outfield role and did so in many different ones under a number of different managers in several formations and styles, but when a player can be peerless on his day, and even on off-days can produce individual moments that can change the direction of a game, finding the most productive role for them can be the difference between a team’s success and failure.

Gerrard’s best spells were in positions outside of the central midfield role he will most often be associated with.

When used to the right of midfield his crossing was up there with the best and he boasted explosiveness and sprinting speed which meant he could easily have carved out a career as a winger or full-back.

His defining years were perhaps those behind and often alongside Fernando Torres. Here he could roam from a No. 10 position, either dropping deeper to play his long, raking passes into the path of the prolific Spaniard, or move forward to join his partner in the goals as they scored 84 between them in just two seasons.

His flicks and first-time passes added flair to his repertoire, adding to a combination of vision and technique which could unlock any defence.

Those seasons were also a showcase of Gerrard the goalscorer. A supreme and varied finisher. Given his height and, again, that underappreciated speed, he could have carved out a career as a striker.

Later in his career, he was used in what was dubbed a ‘Pirlo role’, named after the Italian deep-lying playmaker, Andrea Pirlo. Had Gerrard played his entire career in this position it could well have been named after him, but he had much more to his game than the more refined Italian whose strengths and weaknesses placed him nicely in the regista role.

As he entered his thirties Gerrard became slightly less buccaneering and a more focused role could have taken him closer or further away from goal, so complete was his skillset. The drop into a deeper position led to those Pirlo comparisons, but he could just as easily have been a Francesco Totti while still boasting more dynamism than either of the suave Italians. While Gerrard went some way towards emulating Pirlo, there is no way Pirlo could have emulated Gerrard.

Three positions in which he excelled. None of them in central midfield.

During those heady days with Torres, Gerrard wasn’t far off a modern-day role which has been described by one of its best exponents, Kevin De Bruyne, as a ‘free-eight’.

In this position, De Bruyne can be seen supporting Sergio Aguero in attack, dropping deep to spray passes around the pitch, or drifting wide to execute those crosses which are almost impossible to defend, and matched only by a similar technique used by Trent Alexander-Arnold.

Though the systems in which Gerrard and De Bruyne played are different, the all-round skillsets required are fairly similar and the mentality needed to play such a role and the responsibility assumed are also comparable.

There is plenty of Gerrard in De Bruyne’s game, and the Belgian is also adept when it comes to those skills off the ball which require aggression and intense work-rate.

Like Gerrard, De Bruyne can be at his best when he appears to be on his last legs. Exhausted in the final throes of a match, but still able to find that reserve of energy to produce something magical.

Few players have been able to take a game by the scruff off the neck in such an obvious and effective manner. De Bruyne’s predecessor as City talisman, Yaya Toure, might be the link between Gerrard and De Bruyne in the Premier League – and it’s easy to imagine them slotting into current lineups.

Were Gerrard playing his football today in the 4-3-3 system used by Klopp and Guardiola to dominate the Premier League in recent years, this ‘free-eight’ role would be perfect. It combines the skills he showed and positions he took up during his best seasons. Joining the striker up top, drifting right, and also being able to drop deep and spread the play. It would be very close in style to those seasons with Torres as a ‘free-ten’, if you like.

Maybe Alex Oxlade-Chamberlain has come closest, while at Arsenal the Ox spoke about his admiration for Gerrard and how his compatriot is someone he looks to emulate.

The former Liverpool captain and club legend can still be an example for players to follow today, as he could probably do an excellent job in today’s game.

It might useful to revisit and re-assess greats of the game, and no player is as perfect as they are portrayed after they hang up their boots but, if anything, Gerrard’s ability should be appreciated more in hindsight, rather than diminished.