Jurgen Klopp has used this time in lockdown to rewatch Liverpool games and speak to his squad over Zoom, but for the boss, nothing compares to day-to-day life at Melwood.

The Reds have been able to report to the training ground for individual sessions only in recent weeks, with the club following their Premier League counterparts in reopening the facility.

But team drills are not set to resume until next week, and no official date has been set at this stage despite previous indications this would begin on May 18.

Klopp has not been a frequent visitor of Melwood of late, instead remaining in Formby as he isolates with his family, only connecting with his players from afar.

And in a interview with BBC Sport, the manager explained how desperate he is to return to training, as the everyday life is “something I really miss.”

“I miss the boys the most, not only the boys but all the people at Melwood, because we have a really, really good relationship,” he said.

“So we saw each other pretty often with Zoom, but it’s still not the same and going back to Melwood, just to go there, doing the things we usually do, that’s something I really miss.” 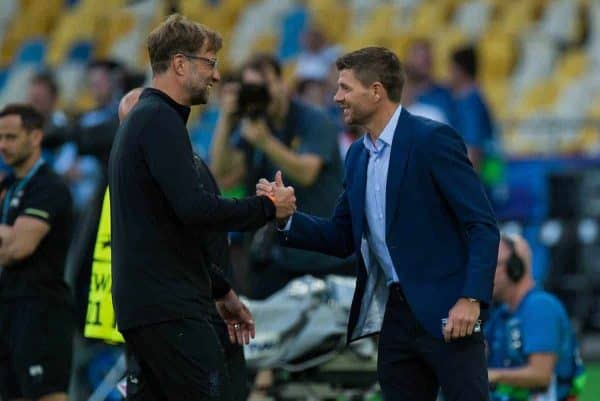 Klopp has been able to catch up with Steven Gerrard while in lockdown, however, as they regularly bump into each other around town, with the manager revealing they had never seen each other in Formby previously.

“Four-and-a-half years I’ve lived here in the town and never met him [around],” he continued.

“I knew where he lived, and obviously I live in the house he built, Brendan Rodgers bought and we rent, but it never happened.

“Now six, seven, eight times I’ve seen him, walking with his kids or with his missus, and I’m on a run or a dog walk.

“We always keep distance, it’s easy, you can speak to another person when you are five, six metres apart.

“It’s nice, I admired him as a player, then I met him here and he’s a great guy, so always good to see him.”

Reflecting on the situation as a whole, Klopp insisted he had little time for introspection, instead reliving old Liverpool games and cherishing how, despite the obvious barriers, “how much we are connected to each other.”

“I’m not the kind of person who sits back and thinks about my future or my past,” he added.

“Obviously I’ve seen a lot of videos of our games, I’ve never had the time for this in my entire life, so now I enjoy that.

“I didn’t learn a lot in lockdown, apart from that obviously Gary Neville has an opinion about absolutely everything! It’s incredible.

“So I’m quite proud of how we as a society deal with it, to be honest.

“We are, as human beings, not perfect, so we will always make mistakes, but I think we all understand a lot more how much we are connected to each other.

“There are not a lot of good things in the moment, but that we’ve learned that, and we were allowed to learn that, that’s something good.”