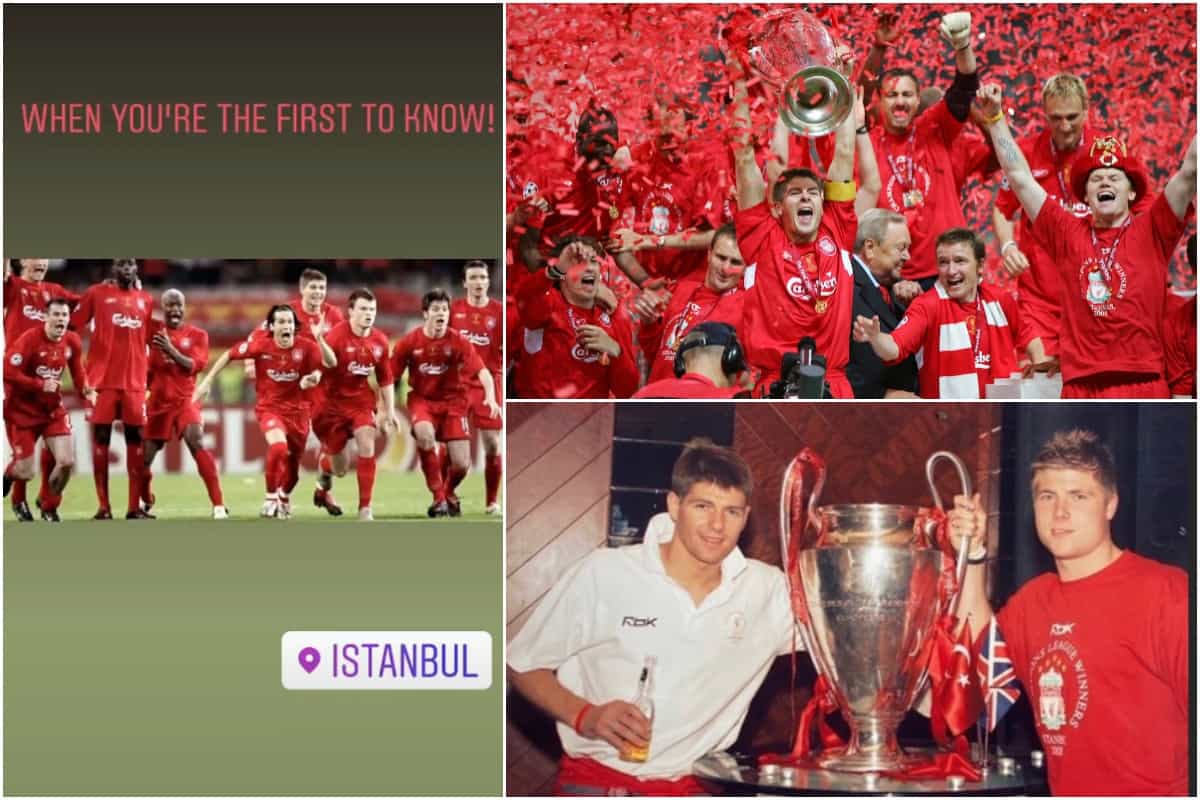 The overwhelming emotions triggered by that night in Istanbul 15 years ago today ensures all those involved and watching on are more than happy to relive the day which is immortalised in sporting history.

Should one ask why football, why Liverpool – you simply point them in the direction of the Miracle of Istanbul and it will speak for itself.

While no one could have anticipated what was to unfold on May 25, 2005, the events which transpired in the Ataturk Stadium means Rafa Benitez’s men will never be forgotten.

And every passing anniversary is rightly celebrated and this one is no different.

Former players have taken to their social media platforms to celebrate the day, with post after post inviting comments from a host of Reds as they commemorate the shared achievement with their teammates.

Both Jamie Carragher and Steven Gerrard made a reference to a line from John Lennon which has become synonymous with Liverpool Football Club as they left their video and picture to speak for itself:

There are places I’ll remember……

Luis Garcia, Anthony Le Tallec and Florent Sinama-Pongolle, the latter two of whom were not in the matchday squad for the final but did feature throughout the campaign, all shared their own unique video as they reflected on what was a “magical” and “amazing” game of football:

15 years Ago, Today, we had the chance of enjoying one of the most Amazing Football games of all times. You can be Supporter of any team in the world, if you love football, you know what I mean. The passion, the effort, the crowd, the teams…the comeback !! Goosebumps once again to se these images From Liverpool to Instabul!! #YNWA #OnceaRedAlwaysaRed #2005 @liverpoolfc

magic to see again this fabulous moment and to have lived it ? @liverpoolfc #YNWA ?? #2005

The 12 minutes worth of your day! 15 years ago, we won the Champions League final 2005 in a great and unexpected scenario! Whatever the team you support, moments like this brings you definitely goosebumps! Enjoy ?? @liverpoolfc @championsleague #oncearedalwaysared #ynwa #onthisday

Neil Mellor, whose contribution proved vital on the road to Istanbul, posted a brilliant throwback photo with the skipper and Ol’ Big Ears:

15 years ago: Sharing a beer with the skipper and celebrating the greatest ever European Cup final victory #LFC #istanbul #Onthisday #championsleague ?????? pic.twitter.com/87xqsKTENA

For Djibril Cisse and Fernando Morientes, it was a time to laud the entire squad for their triumph in a game which epitomised that “the champion never gives up”:

Similarly, Sami Hyypia, Harry Kewell and Jerzy Dudek were full of appreciation for the Liverpool faithful and still in awe of what proved to be an “UNFORGETTABLE” evening:

The way We win ? in Istambul is UNFORGETTABLE ?? love u Guys ? #istanbul #05 #championsleague #? #liverpool #milan #ynwa

One which made a notable impression on the current squad, with a six-year-old Trent Alexander-Arnold watching on with his brothers and a 19-year-old James Milner both taking to Twitter to share their memories of the game:

Still remember watching it with my brothers. What a night ? #YNWA pic.twitter.com/rSqzvN4xlN

I was a teenager watching this game – it was incredible what the #5times team did that night ????? https://t.co/ibU2JOrPG8

And finally, even Jurgen Klopp himself, who was managing Mainz at the time, could not hide his delight as he exuded childlike joy upon realising what day it was:

The boss when he realises it’s Istanbul 2005 anniversary… ?

The day of May 25, 2005, is one which proves that anything is possible and it is always heartwarming to see players and fans alike come together to commemorate the incredible triumph every single year.