Morgan was the Reds’ reserve physio from 2005, working his way up to be head of the department by the time he left.

He was notably praised by former captain Steven Gerrard, who says Morgan “saved his career” on more than one occasion and was “the best” physio around.

The Athletic‘s David Ornstein now reports that Morgan will return at the end of the season.

The highly thought-of physio is set to “inherit the duties of first-team physiotherapist Christopher Rohrbeck in a department led by Lee Nobes.”

Rohrbeck is being allowed to return to Germany for family reasons, while the incoming man’s family reportedly still live locally to Liverpool.

Morgan departed in 2016 to take up a role at Crystal Palace, where he worked alongside another former Red, Dr. Zaf Iqbal. Consultancy spells with LA Galaxy and the English FA also form part of his impressive CV, while the past two years have been spent at the Emirates. 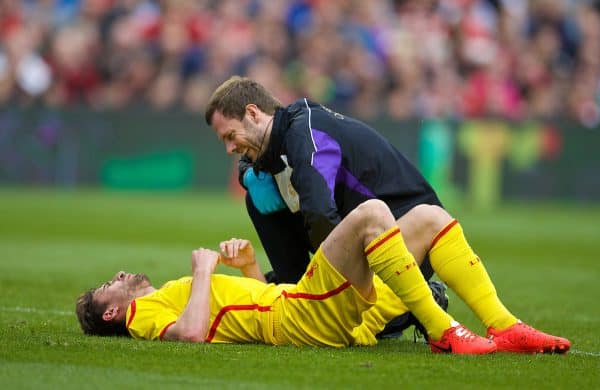 As Arsenal‘s Head of Physiotherapy, Morgan served under Unai Emery and Mikel Arteta, working alongside two other names with Anfield links: Paulo Barreira, a physio at Liverpool at the same time as Morgan, and Gary O’Driscoll, the Gunners’ Head of Medical who the Reds had hoped to land earlier this year in the same role to replace the outgoing Andy Massey.

As it stands, the Reds may not yet go ahead and fill the void left by Massey.

The Evening Standard‘s David Lynch reports that the club have been impressed by the way Academy doctor Jim Moxon has acted at first-team level, particularly with his handling of matters during the coronavirus pandemic.

As such, there is “no rush” to replace him and it appears he’ll see out the season fulfilling those duties.

Jurgen Klopp has overseen a slight, but constant, renewal and expansion of his backroom staff throughout his tenure at the club, and continually places enormous trust and emphasis on the expertise of those around him—and credits them with equal shares in the success of the team on the pitch.

Morgan should be the latest addition to that elite group, having already proved himself with the Reds previously.