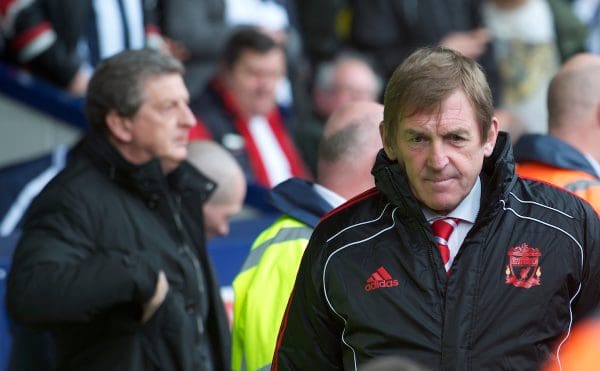 Liverpool entered the 2010/11 season under the supervision of a new manager in Roy Hodgson, but it would prove to be a short and disastrous reign.

The Reds headed into the summer of 2010 with Rafa Benitez no longer at the helm, with Hodgson instead manning the post at a club that was crumbling under the ownership of Tom Hicks and George Gillett.

A seventh-place finish the season prior would be improved upon, but only after a topsy-turvy campaign and the return of the King.

Both the summer and winter transfer windows would result in talking points that would dominate headlines for years, with Fernando Torres and Javier Mascherano notable departees whilst Luis Suarez and Andy Carroll made their arrival at Anfield.

Ultimately, the Reds would finish the campaign in sixth place after Kenny Daglish oversaw their resurgence, where 13 different goalscorers contributed to 59 Premier League goals.

Hodgson returns the keys of the castle to Kenny

On July 1, 2010, Hodgson was officially announced as the club’s new manager, signing a three-year deal as Liverpool looked for stability.

They got anything but, however, as while he had spoken of his honour to take on ‘the biggest job in club football’, he would soon be saying that ‘Liverpool were not too big for a relegation battle’ merely seven games into the season.

The Reds had accumulated just six points by the time the ninth matchday rolled around, where they had settled in the bottom three for the first time in 46 years.

Liverpool’s environment was bleak on and off the field, with the new owners yet to arrive, and after winning just seven of his first 20 Premier League games, Hodgson was given the boot with the club sitting 12th in the table.

Dalglish would step back into the fold, just less than two decades after his first spell as manager came to an end.

The King would oversee the club’s resurgence, offering some much-needed balance after a turbulent year, having seen his side succumb to just five more defeats – with the Reds clinching 33 points from the last available 18 games as opposed to 25 in the first 20.

The season got off to an emphatic start in terms of goals, with David N’Gog’s thunderbolt against Arsenal from a tight angle – Manuel Almunia wouldn’t have even seen the ball until he picked it out of his net.

But one cannot look back at the goals throughout the 2010/11 season without taking time to lavish praise on Raul Meireles’ stunning volley at Wolves in a 3-0 win.

He had met the ball with incredible precision on the full, sending the ball flying into the top right corner from 25 yards and it’s hard to disagree with then Wolves boss Mick McCarthy’s view that
“You could have had two goalkeepers and still not stopped that.

Fernando Torres was still banging them in with finesse and poise as you would have expected, with Chelsea and Bolton most notably feeling his wrath before he was to depart for Stamford Bridge in January for £50 million – leaving Reds both angered and heartbroken.

A hit and miss as Suarez and Carroll arrive

But whilst the Reds’ star striker left for their league rivals, Liverpool immediately invested the funds with mixed results.

Suarez and Carroll both arrived on January 31, 2011, for £22.8 million and £35 million respectively, the latter of whom never justified his hefty price tag which was a club record at the time.

Carroll would score just two goals in the remainder of the season, accounting for a third of his career tally for the Reds in the league, both of which came against Man City – with his low drive from distance the standout.

But it was Suarez would showed signs of being the man to stitch back together the open wounds left from Torres’ departure after leaving countless defenders on their backsides as he weaved in and out of the opposition with frightening ease.

His jinking run at Anfield against Man United, which set up Dirk Kuyt, was the precursor to his goal at Sunderland the week after, one which saw his ability in tight spaces take centre stage as he found the net from an acute angle.

In 13 appearances, Suarez found the net a total of four times and set up a further three – but it would be just the start of his story at Anfield.

FSG and the defining moment

‘Built by Shanks, Broke by Yanks’ was a regular sight at Anfield as Hicks and Gillet did their best to drive the club to its knees, drowning in debt.

Empty lies and promises were quickly found out, but their stay would extend until 2010 – a year which would prove to be a decisive moment in Liverpool’s modern history.

A court battle ensued and on October 15, 2010, Fenway Sports Group, then New England Sports Ventures, were victorious in their bid to sign the club for £300 million.

While they too have been far from perfect owners, their arrival signalled a new slate for the Reds and provided the foundations for the dominant Liverpool side in present day.

While football is often defined by signings on the field, this was one that continues to reap its rewards, a sliding door moment if you like.