After Liverpool were crowned Champions of England for season 2019/20, Alex Malone penned a heartfelt tribute to Jurgen Klopp for delivering No. 19 after 30 long years.

It took 30 long years but finally, the ultimate prize, the holy grail to many – the ‘bread & butter’ title as Shanks called it, is ours.

I felt compelled to write you this letter as I, and millions of Reds around the world, reflect on what has been achieved since your arrival at the club.

It is a letter of thanks, not just about the trophies you have won, but about so much more.

Thank you for leading us to unparalleled seasons in our club’s history, with 183 points in the last 69 league games since the start of last season; 58 wins and only two defeats in those 69 games while also winning the Champions League is unprecedented. 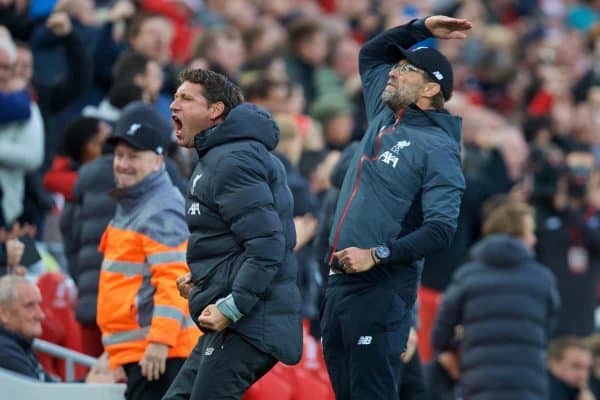 Thank you for the greatest home record run any club has ever seen, with 23 home victories on the bounce – and counting.

Thank you for embracing all fans of the club. Whether local or global, it doesn’t matter to you. You rightly care about every fan equally. Thank you for inspiring a whole new generation of die-hard Reds in every corner of the globe.

Thank you for bringing joy and positivity to people’s lives in the most difficult of times. Your optimism is infectious, burns brightly and offers hope to so many.

Thank you for the respect you show to absolutely everyone, whomever or wherever they are. In a world where respect seems to be in short supply of late, you are a ray of sunshine.

Thank you for continuing the legacy of the humble geniuses who preceded you. Shanks, Bob Paisley, Joe Fagan and Sir Kenny are giants amongst men, and your place alongside them is secured.

Thank you for everything you have done, and continue to do, for the families of the 96.

Thank you for your fairness, togetherness, loyalty and humility. Scousers embrace these qualities above all else. Only a person who lives and breathes these ethics can ever be truly accepted in our city. You have not only been accepted you have been embraced.

Thank you for crying publicly when the league title was won. We did too. It shows how much you care.

Thank you for making the doubters believe and the believers believe even more.

Thank you for scolding us when we left the game early. You reminded us that beating the opposition was more important than beating the traffic.

Thank you for establishing a winning mentality across the entirety of Liverpool Football Club. Not just the players, but also the fans, the coaches, the medical team, the backroom staff and everyone else associated with the Club.

Thank you for embracing Shanks’ ‘bastion of invincibility’ battle-cry and for creating a team as close to invincible as there has ever been. And just like the great man himself, thank you for reminding us that first is first and second is nothing. 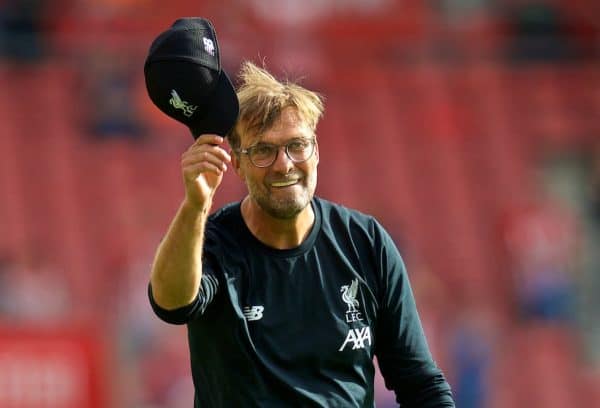 Thank you for reminding us that no club is bigger than Liverpool FC, not Real Madrid, not Barcelona. Not anybody.

Thank you for showing us that money does not necessarily buy trophies and that talent, heart, togetherness and desire are the ultimate currency.

Thank you for your dealings in the transfer market, which, along with the wizardry of Michael Edwards, is unprecedented in its success. Your decision making in squad development has been close to flawless.

Thank you treating everyone – and I mean EVERYONE – with respect. From those in the media to the adoring fans, to every member of the backroom staff, irrespective of position.

Thank you for supporting each and every one of your players equally, whether they be a global superstar, a player leaving the club or a young academy graduate. Unlike other managers, you believe a bus is for touring the city centre parading trophies, not for throwing your players under.

Thank you for the fist pumps, the bear hugs and the infectious laugh. Thank you for your unrelenting positivity even in the most challenging of times. Your grace in defeat too, speaks volumes.

Thank you, FSG and your entire team for reminding us, and the rest of the world, that WE. ARE. LIVERPOOL. – and that this really does mean more.

I grew up as a young teen idolizing Bill Shankly. He, along with my late dad, has remained my foremost role model and inspiration throughout my life. I had convinced myself that no-one else would ever again inspire and motivate me the way Shanks did.

Then you came along.

Supporter of The Greatest Football Club On The Planet.