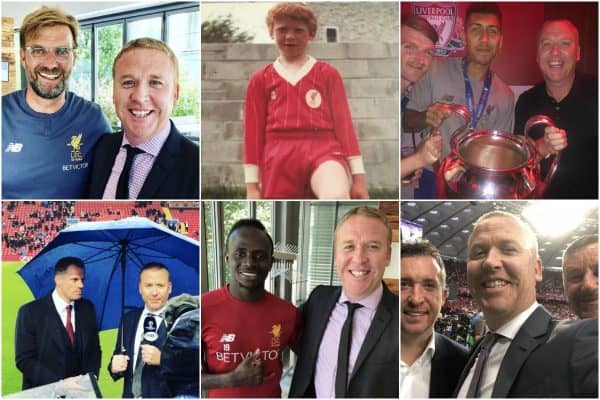 In the latest edition of ‘My Liverpool Life’, commentator and TV presenter Keith Costigan shares tales and stories of his unique life as a Red.

Growing up in Ireland in the mid-1980s, it was going to be Liverpool or Man United at that time. I copied my brother all the time and he said he supported Liverpool as a joke – he was really a United fan – but I said I’m staying with Liverpool.

I remember watching them away at Aston Villa when they wore the all-yellow kit with the little red stripes. I think Rushie scored – he might have scored a hat-trick that day – and that Sunday in the newspaper they gave away a free colour photo of Rushie in the yellow kit. I was hooked, that went up on the wall and after that there was only one team for me.

At the end of that year, I remember sitting with my dad watching Liverpool beat Roma in the final. I always remember Phil Neal scoring and Bruce Grobbelaar doing the legs. After that I was completely hooked as a Liverpool fan.

I watched a few in pre-season, but the one that sticks out is I went to Anfield in late 1986, and it was 6-2 to Liverpool against Norwich. They went 5-0 up and I remember the Norwich fans singing ‘we won the finish 2-1’, or something like that. I just was mesmerised by the atmosphere. I think Rushie and Paul Walsh got a few.

Once you walk into Anfield, the atmosphere, particularly at that time, was incredible. Liverpool were so all-conquering then. To have eight goals in your first game, and have Liverpool completely destroy the opposition, was incredible. It’s a day I will always remember.

I think I was with my youth team and my dad came as well, but not everybody was a Liverpool fan. You had to deal with some people trying to get at you saying Norwich were going to win.

Rushie was great, but I remember Paul Walsh was outstanding that day. I thought he was this incredible footballer. He was the one player who really stood out for me as being a top level player.

In the early days it was the 1987/88 season. I didn’t understand tactics then. When Liverpool went away to Newcastle and won 4-1 and Stevie Nic got a hat-trick, you don’t fully grasp that this player can play everywhere.

Liverpool had so many incredible players: John Barnes, Peter Beardsley, Steve McMahon in midfield I absolutely adored. Rushie obviously, Aldo, that team was so good going forward. Then you had Steve Nicol who you could plug in anywhere and he could play at the very top level. Just watching that team was incredible for me.

That was my first introduction to the Liverpool way, starting to understand the style of play and what it meant. It wasn’t just winning, it was winning with flair.

In more modern times, the 2008/09 season, where we went so close, I thought we were so powerful, we had everything. I think Stevie was in his prime and Fernando Torres never had a season like that again. That season was absolutely incredible.

You look back now and you have to pick out individual seasons – the last few for me stand out. Even though we went close last season, there wasn’t a feeling that it was our chance ruined, you knew this club was being built again to challenge every year.

I came into this season just as excited and I’ve enjoyed it just as much. Towards the end of last season, I remember that feeling in my stomach away at Newcastle when it was 1-1 before Origi scored. I was thinking ‘this is so stressful’, and then I thought ‘you’ve waited a long time for this, we’re not battling for fourth now. This is where you want to be.’

Those couple of seasons stand out, but now under Klopp every season there seems to be something to look forward to and get up for. It’s an incredible time again to be a Liverpool fan.

I had a boss in Jonty Whitehead at Fox who respected my work ethic in what we did. We covered the Europa League and Champions League and I always remember when Liverpool came back against Borussia Dortmund, I was calling a different game at the same time. My producer’s in my ear telling me ’3-1 Dortmund, 3-2 Dortmund’, then ‘I want you to stay calm here, but it’s 3-3’.

My game was 0-0 going into extra-time and he says ‘you’re not going to believe it, they’ve scored late’, so I had to remain calm on air and I’m going ‘0-0 here, we’re going to go for a break and we’ll be back for extra-time’.

When we went off air I went nuts and went over to Jonty afterwards, who’s a Sheffield Wednesday fan. He just gets it, he understands your bond with a club. He said that we should probably have someone there for the semi-final and he asked me if I was interested. I said I was and he sent me over and I got to interview Klopp before the Villarreal game, and it was absolutely incredible.

For the next couple of seasons it was the same, going to the Champions League run in Kyiv, doing stuff with Carragher, and Stevie Mac and Robbie Fowler at the final. I love my job, but at times you do look around and go ‘hang on a minute, this is the club I grew up loving. This is the best of both worlds’.

Not everybody gets that opportunity, so I’m blessed to work in this industry and when I’m covering Liverpool in a Champions League final that’s the icing on the cake. You can’t ask for more than that.

You’ve interviewed a lot of the current squad.…

I think Jurgen is exactly how you see him on TV. We all have a mechanism in us that we read people and make a judgment on them.

I’ve interviewed a lot of players from different clubs and sometimes you’ll realise early on this guy doesn’t want to be here or his heart isn’t in this interview, but not with Jurgen.

The first time I interviewed him I said I really appreciated him taking the time and he said ‘no problem, Matt (LFC press officer) said I have to be here’, but when he’s there he’s so invested in your conversation. He won’t cut an answer short because he’s got to go somewhere, he’s in it and is completely straight up and honest with you.

You don’t feel like there is a stock answer. If you’re asking him a question that might be difficult, he will be honest. He’s just so engaging and he commands the room. I’ve heard players say he is an honest coach and he lets you know where you stand – you feel that when you are interviewing him. There’s so much to him.

On the players’ side, Gini Wijnaldum is a top-level person. Every player that I’ve interviewed has been great, but I think Jordan Henderson just does that little bit extra when you’re with the club and around them.

He doesn’t get enough credit for what he is as a leader. I remember we arrived in Germany for pre-season before 2017/18 and Jordan sees us, make a beeline towards us and says ‘hey, what time are we doing the interview today?’

I said I wasn’t sure and he made sure they were looking after us and getting us coffee, and went out of his way to make sure that we were comfortable. He didn’t have to do it, and not many do, but he did. In the interview he was absolutely incredible.

After the game against Bayern Munich (in that pre-season), I went down to the dressing room because I was getting some stuff from Jurgen, and Jordan came out and chatted again. He just gets it. It’s not just me, he was doing it with everybody. He understands what it means to wear that armband.

Jurgen had a line about him when I first interviewed him, he said he has big balls, because to take the armband after a Liverpool legend means you’ve got to have some belief. Jordan doesn’t get enough credit for that, and because of that he’s the one player I love interviewing. He’s a top person, as well as a top player.

It has to be Bill Shankly. I think when you talk about building a culture, that’s what he did. There are times when the next manager really benefits, and while Bob Paisley won more European trophies, it’s building that foundation (that’s the key).

I think he is the most important figure in the history of Liverpool Football Club.

I would say Kenny Dalglish as well. I’ve been lucky enough to be around Kenny and I think people have this idea that he is quite shy and dry, but he’s not. He is a real smart arse.

I remember once he saw me at the academy – I know Paul [Dalglish] well – and he came up and said ‘I knew you weren’t a player because I saw the size of your arse from back there!’ He’s just a top, top guy.

He was at a period of the club that was so important, and a difficult time through Hillsborough. He was there and held the club together.

The last one would be Jurgen, for me to have that conversation, and to see the dynamics of Shankly, Dalglish and Klopp together.

One of the keys for Jurgen is that I don’t think he is overawed by anybody, but he still shows respect for everybody.

I imagine Bill Shankly would absolutely love Jurgen Klopp, and vice versa. And Kenny would be the entertainment in between that could knit both of those generations together.

* Thanks to Keith for sharing his ‘Liverpool Life’. You can find Keith on Twitter @KeithCostigan.