Dejan Lovren is set to join Zenit St Petersburg in a deal worth close to £11 million, after Liverpool exercised their option to extend his contract to 2022.

Lovren joined the Reds from Southampton in 2014, and has gone on to make 185 appearances for the club, winning four trophies including the Premier League and Champions League.

But this season he has played just 15 times in all competitions, having been convinced to stay amid interest from AS Roma last summer.

Having served as fourth-choice centre-back throughout 2019/20, Lovren has now opted to leave in search of regular first-team football, with a host of clubs registering interest.

Zenit have been the front-runners, and according to the Times‘ Paul Joyce are now “on the verge” of completing a £10.9 million deal to sign the 31-year-old.

This is over half the fee Liverpool paid to sign Lovren six years ago, and comes after the club triggered an automatic one-year extension on his contract.

Another example of Michael Edwards’ ability to maximise value in the market, this forced Zenit to increase their offer, having initially hoped to sign him “for a knockdown fee.”

The deal is described as “imminent,” though whether it will be announced before Sunday’s season closer at Newcastle is unclear. 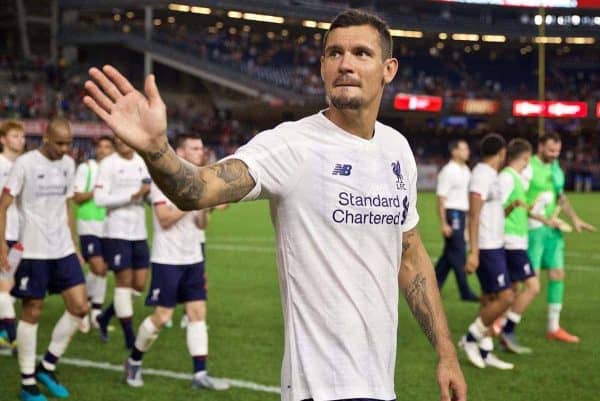 That could provide Lovren with a farewell appearance, having not started since the 3-0 defeat to Watford in the Premier League on February 29, though Liverpool are still pushing for a 99-point finish.

With Lovren leaving, the Reds could pursue another centre-back in the transfer market, though Joyce does name Nat Phillips, Sepp van den Berg and Ki-Jana Hoever as possible in-house replacements.

There have been no concrete links with defenders in recent months beyond Leeds‘ on-loan Brighton centre-back Ben White, but the Seagulls have insisted he is not for sale.