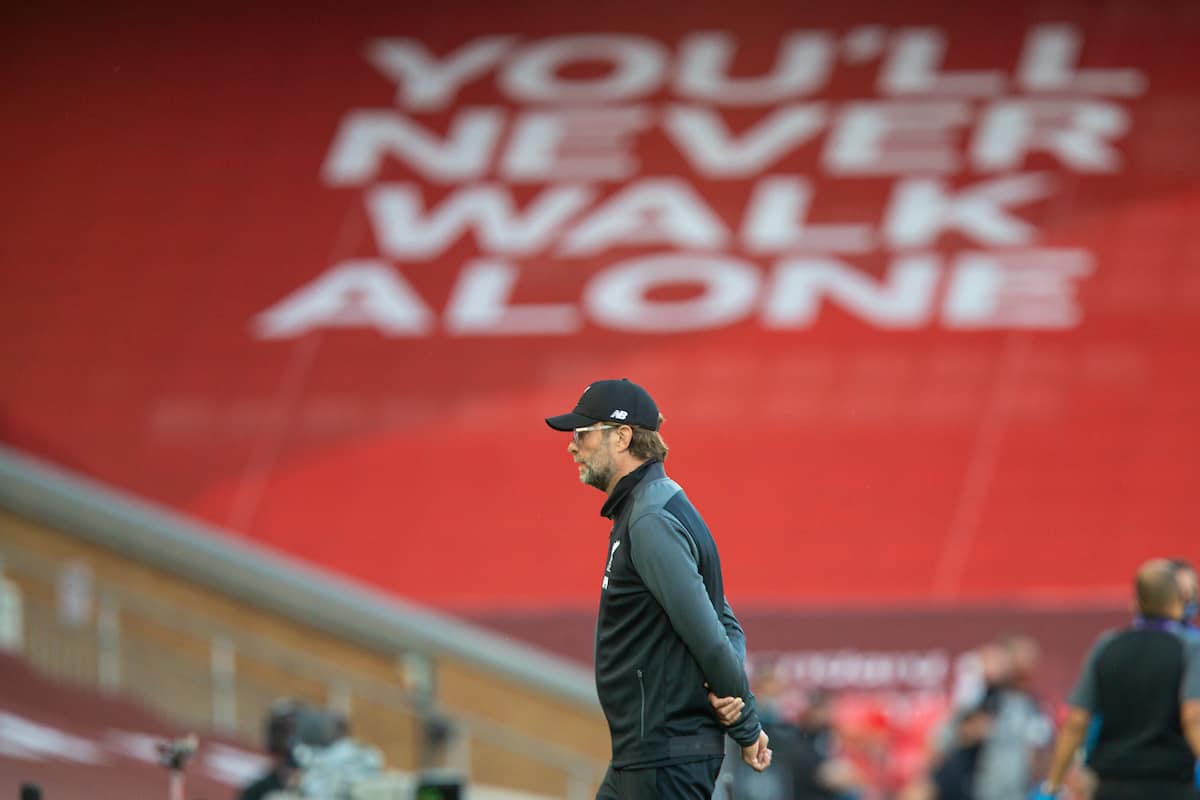 Jurgen Klopp is relishing the “big moment” of Liverpool’s trophy lift at Anfield, but before that he hopes his side give “everything we have” to beat Chelsea.

The Reds will be presented with the Premier League trophy after their final home game of the season next Wednesday night, with Sir Kenny Dalglish handing over the prize.

It will be a special night for the club, being awarded their first top-flight title since 1990, with Dalglish’s presence symbolic as the last manager to win it—and as one of the most important figures in Liverpool’s history.

But in the wake of a 2-1 defeat to Arsenal, and before that defeat to Man City and draws with Everton and Burnley since the restart, the prospect of another deflating loss is looming.

Liverpool host Chelsea on July 22, with Frank Lampard’s side still fighting for a top-four finish, and therefore the challenge will be significant.

To cap a perfect night, Klopp will be hoping for a victory over the Blues, and speaking in his post-match press conference at the Emirates, insisted his players would give “everything we have” to do so.

“Twice with Dortmund we had to win the game and got the trophy on that day.

“It’s difficult, especially if the other team is Chelsea and they’re fighting with all they have for the Champions League, so that will be tricky.

“But after the game we will be completely fine, and whatever happens then really the boys deserve that, we all deserve that we have a proper ceremony.

“But look, it’s like football is, we have to play a football game before and we want to win that.

“That’s what I’m happy about, that I saw today that the boys want to win it, they made two wrong decisions but we wanted to win it.

“And that’s what will happen next week, 100 percent, we will try with everything we have to win the game.

“Then what happens, what we’ve all been waiting for ages, some of us 30 years, and we will finally get this Premier League trophy.

“This will be a big moment for all of us, for our families, that’s 100 percent.

“But before that, we have to play a game, and for five million reasons we will try to win it.”

The trophy lift will remain a joyous occasion for everyone involved with Liverpool, a marker of the work of Klopp and his side over the past five years and the long wait for fans since the last in 1990.

But to suffer another defeat before the ceremony, which will see Jordan Henderson handed the trophy after missing the game through injury, could dampen the mood slightly.

In an already-surreal atmosphere, with no fans in the stadium, it would make the situation even more strange—and that will be fuelling the Reds’ desire to win, despite having wrapped up the title with seven games to play.