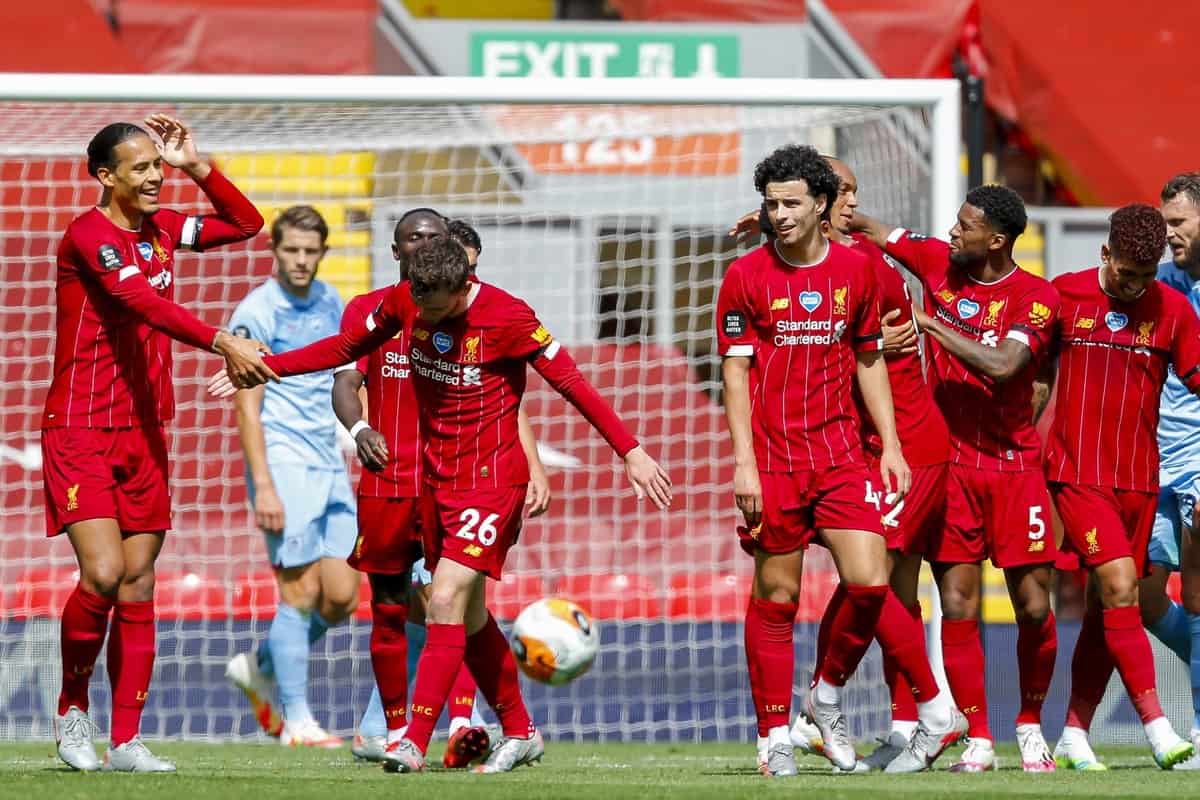 It was a case of concentrating on what is still on the line for Liverpool players following their 1-1 draw with Burnley.

On any other day, Jurgen Klopp‘s side would have been three or four goals to the good and all but ensured Burnley were just the passengers on the way to another Anfield victory.

However, on this day, the scoring boots were not adequately laced up and as such the visitors remained within striking distance and Liverpool paid the price, with Andy Robertson‘s stunning opener cancelled out by Jay Rodriguez.

There was frustration in the air following the final whistle as the Reds were forced to accept just a solitary point being added to their tally.

The result ensures Liverpool must win all of their three remaining games to eclipse Man City‘s all-time points record, whilst seven points from nine would see them as joint record holders.

And Liverpool’s goalscorer on the day was quick to credit Burnley for their performance, but rued his side’s wayward finishing for allowing them into the game. 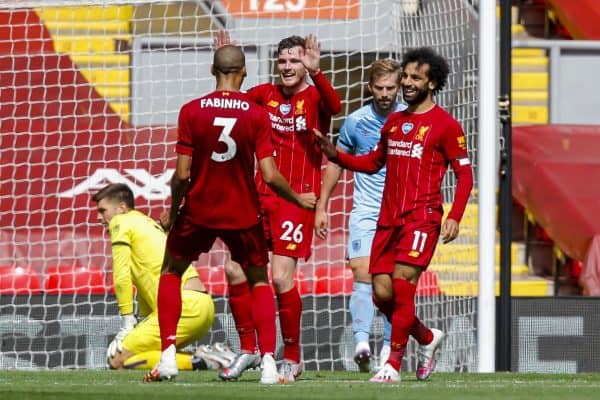 Robertson, who has missed two league games this season, was also eager to stress to BBC Sport that Liverpool are “working 100 percent” in both training and in the games and that the early title win has not shifted their focus:

“The corner came back to the edge of the box and Fabinho saw the run. It was a decent header to be fair!

“Credit to Burnley but we needed to be much better than that. We dominated the first half and created a lot and they didn’t really have any chances. We know with a team like Burnley, they grow with confidence when it’s only 1-0.

“We have to be more clinical in front of goal. Burnley are in the position they are because they grind out the results. Fantastic squad, fantastic manager, so credit to them, but we know we can do better.

“We can assure you we are working 100 percent in training, in games. We were good enough to win the game today but didn’t take our chances.”

And for, Fabinho, the man that supplied the assist for Robertson’s goal, it was a case of “a very good game” but “not our best day” as the Brazilian looked straight ahead to the next game:

“Generally, we played a very good game, we created very good chances to score and Pope had very good saves as well.

“It’s hard to play against a team like Burnley because they have a very strong team, in the set-pieces we knew we had to have good concentration and so you have to find the space to try our ways, but today was not our best day maybe.

“Unfortunately, the result is not a win but we keep going.”

With three points slipping through the Reds’ fingers, there was a clear message after the game as players took to Instagram.

Young guns Neco Williams and Curtis Jones both lamented chances going begging but both were eager to “go again”:

Disappointed to not get all 3pts but we keep going !?? #ynwa

Plenty of chances today. Unfortunate to not take all 3pts. We go again….. #LFC?

It was a case of not saying anything for Virgil van Dijk, while national compatriot Gini Wijnaldum was disappointed but keen to “make sure we show up stronger” next time out at Arsenal:

Disappointing result today. Now focus on the next game and make sure we show up stronger ?????

And both Robertson and James Milner, who was out of the matchday squad as a precaution for a muscle injury, set their eyes on the nine points which are still there to “play for this season”:

Big Virgil’s reaction says it all!! Enjoyed the goal but disappointed not to get the 3 points!

Plenty of chances but couldn’t put them away today – but still 9 points to play for this season ? #ynwa

The obvious disappointment and frustration stemming from the result is one which is indicative of the attitude which propelled Liverpool to the earliest Premier League title win.

And now all attention must shift to the meeting against a European-chasing Arsenal on Wednesday evening, one the Reds must win if they are to continue their push to surpass City’s all-time points record of 100.