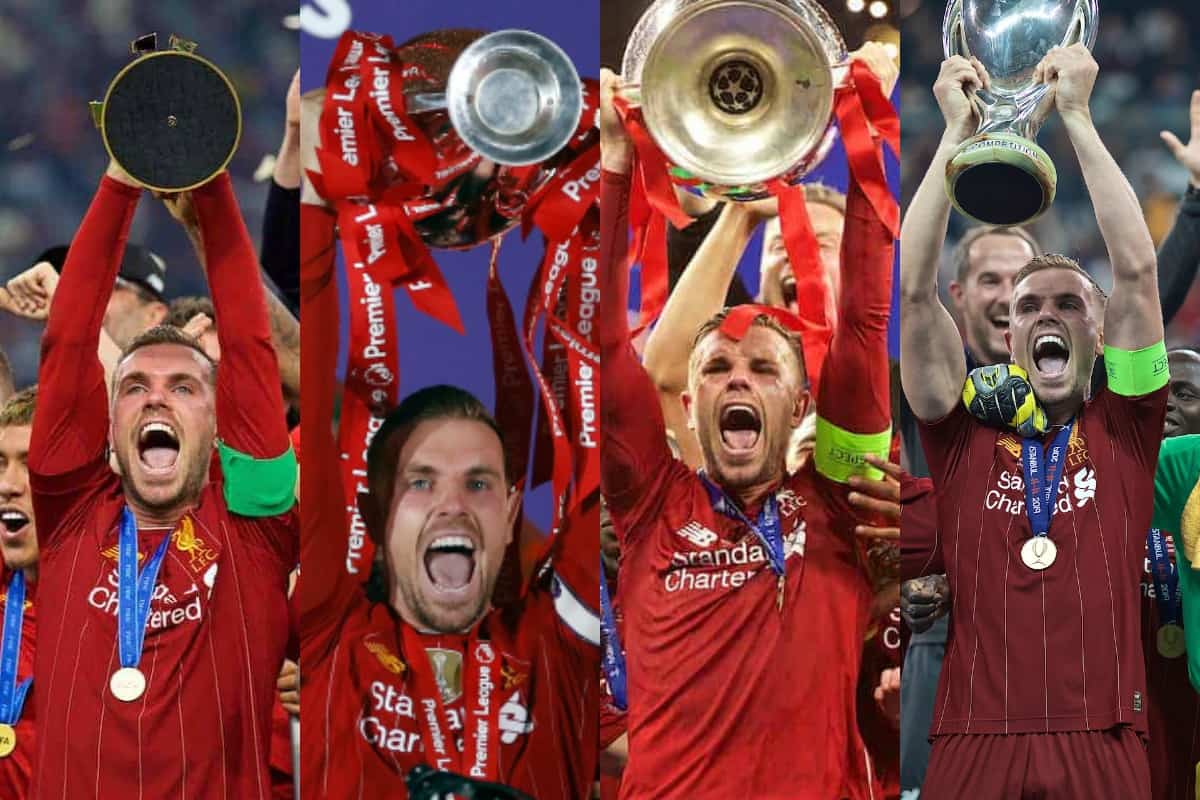 A story of shared love of a family and their football team.

A story that not only crosses three generations from Grandad to Grandson, but one that binds them.

It’s a story that centres around a proud Red watching his son born just before Liverpool’s 18th league title. A new dad who was lucky enough to see his hometown team dominate England and Europe and anticipating the joy of seeing his little lad experience #19.

It seemed a formality back then. Nobody, nobody predicted a 30-year wait.

It’s a story of hopes and dreams; of triumphs and tears – and the joy of when a dream finally comes true.

Whether you’re aged 60, 30 or even six, it will resonate with you. Not just today, or tomorrow, but forever.

If you’re 60, your mind will shift to your kids and grandkids as you beam with pride. You’ll be transported back to your own childhood as you remember the flimsy old match day programmes and the knitted scarf your mum or auntie used to make, adorned with the names of Shankly, Paisley Thompson and Smith.

You’ll see Andrew Schofield as the grandad – y’know, Scully – and you’ll smile because he feels like an old mate you haven’t seen for a while.

You’ll remember that unique sway of the homecoming crowds as Liverpool won title after title; the exhilaration of the City, and your wonderful black and white telly. And you’ll think what you’d give now for one more pair of those Adidas trainees and one last visit to The Boy’s Pen.

You’ll be reminded of the magic of Merseybeat, The Beatles and, of course, Gerry & His Pacemakers. And you’ll think back to when ‘ee-aye-addio’ roared routinely from the Kop, signalling yet another cup triumph.

You’ll remember those chequered Red flags as the lads conquered Europe for the first time in Rome. You’ll remember the classic banners – especially the one reminding us that Joey Jones ate the Frog’s legs, made the Swiss roll, and is now munching Gladbach.

If you’re 30, you’ll look proudly at your old man while harbouring the feeling of exhilaration only Liverpool Football Club can give you.

You’ll remember his stories growing up and how he convinced you that Kenny really IS The King and that Shanks and Paisley were two of the greatest men who ever lived.

You’ll remember the first time you shared the same feelings as your dad with the treble of 2001 and how being up on his shoulders that day felt like the best place on earth.

You’ll remember the miracle of Istanbul in 2005 and be reminded of Steven Gerrard’s face as he lifted old big ears for the fifth time – and how you cried with joy.

But even more than those amazing times, you’ll relive the feeling of unbridled joy and exhilaration of finally, FINALLY achieving the holy grail in 2020.

#19 – the one that throughout your entire life, you thought maybe, just maybe, you might never experience.

You’ll look back to the fateful day when Jurgen Klopp arrived at Anfield and how much it meant back then – and how much more it means now.

You’ll realise that even though your dad saw 13 titles, this one – your first – is every bit as sweet. And not just for you, but for your arl fella and your kid too.

Your dad may have had Shanks and Bob and Kenny – but you each now have Jurgen.

If you’re six, you’ll watch, you’ll listen and you’ll experience your dad and grandad’s joy. You won’t yet understand why you’re being held in the air by your smiling, singing heroes. But one day, very soon, you will.

For those of you who witnessed the original glory years of the seventies and eighties, and who might now have kids or grandkids of your own, this could be your story too.

You craved just one more chapter. Let’s call it chapter 19. Unlike the previous ones, this one wasn’t for you. No, this one was for your kids and their kids. That chapter is now written, and it’s part of their life story now too.

I hope you find this to be a message of pride in your city, your team and of course your family. A message that has remained unchanged across generations of Liverpool Fans. A message that tells your kids and grandkids that they’ll never walk alone.

Whether you have kids or grandkids now or plan to have them in the future, remember:
“These memories last forever. Be proud that you’re a Red.”