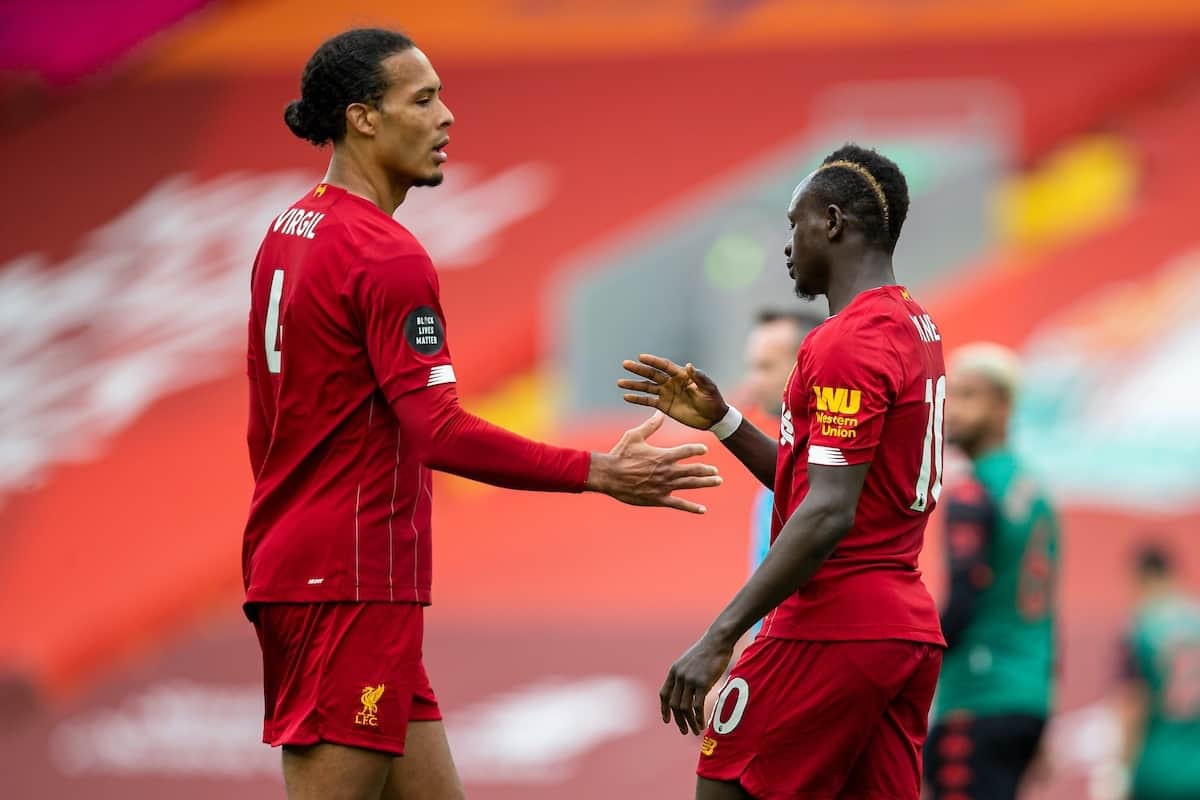 Liverpool returned to winning ways and move one step closer to securing an all-time record as they notched a 2-0 victory over Aston Villa.

As champions do, the Reds got the job done despite being far from their best. A result which moves Jurgen Klopp‘s side to 89 points with five games remaining.

Sadio Mane and Curtis Jones both etched their name on the scoresheet to rescue what was an otherwise dull occasion as Liverpool once again struggled to find their rhythm.

Nevertheless, it was the first win as Premier League champions and keeps a number records within Liverpool’s grasp moving into the final run of fixtures.

There is little downtime between the final whistle at Anfield and the first whistle at Brighton, but here are five key stats which emerged from the Reds’ latest victory.

Salah’s Century Behind Only Shearer

The Egyptian king has been nothing short of a revelation since landing on Merseyside in 2017, finding the goal with ease both directly and indirectly.

In 147 total appearances for the club, Salah has notched an incredible 92 goals and 39 assists, the latest of which has seen him enter the century club in the Premier League.

When Liverpool’s No. 11 met Andy Robertson‘s cross and laid off a header into the path of Jones, who duly dispatched the ball into the back of the net, Salah reached 100 goal involvements in the English top-flight.

Two goals and an assist came wearing a Chelsea shirt on 13 occasions, but the rest were for Klopp’s Reds – with 71 goals and 26 assists in 103 appearances.

Together it accounts for 100 goal involvements in 116 appearances, a tally secured in a time only surpassed by the great Alan Shearer – who hit 100 in 100:

100 – Thanks to @curtisjr_10's finish, @MoSalah has reached 100 @premierleague goal involvements in his 116th appearance in the competition (73 goals, 27 assists), with only Alan Shearer (100 apps) managing to do so at a quicker rate than the Egyptian. Kings. #LIVAVL pic.twitter.com/nuTYx6YSZi

It’s an astonishing return and yet another nod to his quality and instincts in and around the goal.

Reds on Cusp of New Record

Talking about Salah and his involvement in goals, Liverpool moved one step closer to securing another all-time record after the No. 11 teed up Jones.

When the 19-year-old saw his effort nestle into the back of the net it not only secured the winning result and saw him notch his first top-flight goal, but it also meant he became the 17th different goalscorer for Liverpool in the Premier League this season.

No other Liverpool campaign in the first division has exceeded 17 different scorers, with both the 1911/12 and 2015/16 season sharing the club record, as per Liverpool’s club statistician Ged Rea:

It makes for positive reading as Liverpool are not just reliant on the formidable front three in finding a route to goal, making them a dual threat from anywhere on the pitch.

It is that very dynamism which has seen them become champions and now only one more player who has yet to score this season in the league needs to strike before the 38-game campaign ends to set a new record.

And Joe Gomez, Dejan Lovren, Neco Williams, Harvey Elliott and Takumi Minamino are the ones who can break it. 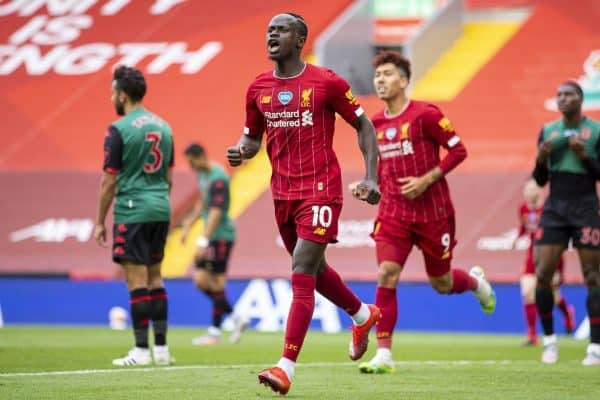 It was another day to remember for Mane as he opened the scoring to set Liverpool on the road to yet another victory.

He will now forever hold the title as being the first Red to score with the Reds as champions with his 16th league goal in 30 appearances in 2019/20, which also coincided with his 50th at Anfield in all competitions.

The speedster has taken his game to yet another level this season and is rightly in contention for being crowned Player of the Year, with his levels of consistency bordering on frightening as his strike off the underside of the post was his 20th in all competitions – a total he has reached in each of his last three campaigns.

But these feats coming to be against Villa should not have come as a surprise as he has prior with the Midlands side, as he has now had a direct hand in eight goals in his last five league appearances against them – six goals and two assists.

Mane, the man of the moment.

Another game on home soil, another win and another rise in the number of matches Liverpool have gone unbeaten at Anfield.

Villa’s visit coincided with the first home league game since officially being crowned champions and despite the visitors’ best efforts, there was only ever going to be one result – even though the Reds made hard work of it.

But the 2-0 win means Klopp’s men are now unbeaten in 57 home league games, winning the last 24 in a row.

An impressive feat any way you look at it but even more so when you consider Everton currently have the second-longest unbeaten home run, which stretches just nine matches.

The aim now will be to end the campaign with 19 home wins, a feat never accomplished in a Premier League season, with only Man United, Man City and Chelsea notching 18.

And now only Burnley and Chelsea stand in Liverpool’s way. 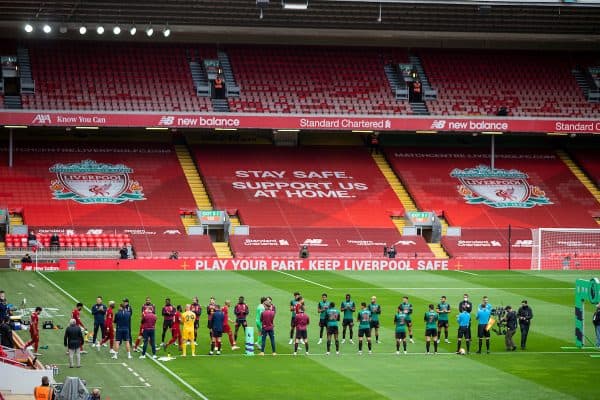 Liverpool’s win coupled with Man City‘s defeat to Southampton later in the day ensured a 23-point lead atop of the table was restored.

The narratives and words which emerged post-City’ win last Thursday now appear somewhat overzealous as you don’t accumulate such a commanding advantage by being anything other than utterly dominant.

And it is been that way almost since the start of the season, from a five-point Liverpool advantage after five games to 17 at the 20-game mark and now 23 with five games left, as The Tactical Times perfectly pointed out:

Man City, when does the new season start again?