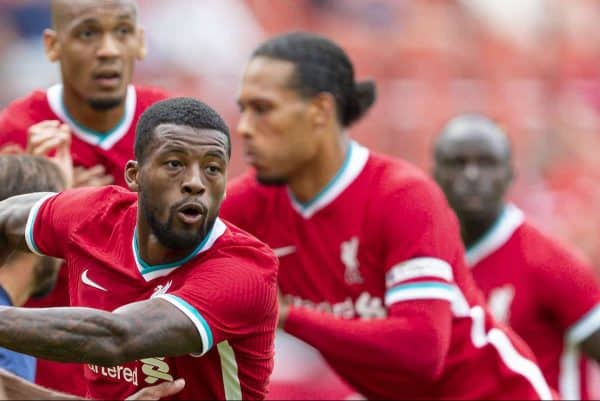 Liverpool take on Arsenal in the Community Shield on Saturday afternoon, with the Reds likely to be close to full-strength at Wembley.

Liverpool drew 2-2 away to Salzburg in midweek as Jurgen Klopp‘s side picked up more precious match practice before the start of the new season.

Next up is Arsenal on Saturday, with yet more silverware on offer for Klopp’s men and a chance to fine-tune their 2020/21 league assault.

Klopp isn’t without options heading into the game, but will he spring any surprises with his personnel?

There are no new injury problems for Klopp to contend with, with Virgil van Dijk fit despite a bruise on his face suffered in the Salzburg friendly.

Joel Matip, Jordan Henderson and Alex Oxlade-Chamberlain remain the only regulars who are definitely absent, but both are working their way back to full fitness.

Trent Alexander-Arnold is “very close” to a return, according to Klopp, while Loris Karius, Xherdan Shaqiri, Harry Wilson and Divock Origi are all still missing.

The most likely scenario is that Klopp opts for the same starting lineup that took to the pitch on Tuesday.

Having the most important players match fit for the new league season takes precedence over giving fringe players an opportunity, and there is still a trophy to play for at Wembley.

With Alexander-Arnold likely to miss out, youngster Neco Williams is set to start alongside Alisson, Joe Gomez, Van Dijk and Andy Robertson at the back.

The Welshman is still learning his trade and will be given a huge test up against the world-class Pierre-Emerick Aubameyang.

In midfield, the absence of Henderson means Fabinho, Gini Wijnaldum and Naby Keita should continue, even though James Milner impressed from the substitutes’ bench against Salzburg.

The front three of Mohamed Salah, Sadio Mane and Roberto Firmino picks itself, as it has done for three years now.

There is an argument to say that starting every key player in what is essentially a glorified friendly is a risk, but Klopp is unlikely to think that way.

It could be that they don’t play all 90 minutes, however.

Klopp’s comments regarding Alexander-Arnold did suggest he might be in the reckoning come Saturday, so a start for the 21-year-old shouldn’t be completely ruled out.

The boyhood Red is now one of the most important players at the club and having him fully fit again is enormous, in terms of Liverpool’s entire playing style.

Should Alexander-Arnold be passed fit at Wembley he could easily start ahead of Williams, but a cameo from the bench may be the best he can hope for.

Gomez and Van Dijk have to start because there are no other fit, established centre-backs, highlighting the importance of making another defensive addition before the transfer window closes in October.

If Klopp is feeling bold, Brewster could be rewarded for a match-changing performance on Tuesday, in which he again showed his eye for goal and prodigious talent.

The 20-year-old will be eager to prove himself again at Wembley and is a strong option alongside Takumi Minamino, should somebody pick up a niggle before the match.

Brewster playing instead of Firmino would make the most sense, allowing him to lead the line in his preferred central berth, but it seems highly unlikely.

While the aforementioned Premier League opener against Leeds is clearly more important, Klopp will still view this as an opportunity to add more silverware to the trophy cabinet.

For that reason, the big guns should be out in force in north London, as Liverpool aim to avenge their 2-1 defeat at the Emirates in July.