Xherdan Shaqiri has outlined his aim to stay with Liverpool and “play like the first season,” having been limited to just 11 outings due to injury in 2019/20.

The winger spent the majority of last season sidelined with a recurring calf injury, but was a regular presence in the matchday squad in the final weeks.

Shaqiri still qualified for a Premier League winner’s medal, and scored in the 5-2 thrashing of Everton at Anfield in December, playing a role in Liverpool’s surge to the title.

But his lack of appearances and a struggle to break into the starting lineup since joining from Stoke in 2018 led to rumours of a move away from Merseyside this summer.

Newcastle were touted as a possible destination prior to the collapse of their takeover, while clubs in Turkey were also said to be interested in the 28-year-old.

He is part of Jurgen Klopp‘s squad for the Reds’ pre-season training camp in Austria this month, however, and speaking to the club’s official website while in Saalfelden, Shaqiri indicated he is looking to stay and fight for his place.

“Always if you are injured or if you are not playing, you’re frustrated,” he admitted.

“But I’m looking forward to this season and trying to help the team all the time, so I have the chance to play like the first season.

“As a team, I just want us to achieve a lot of things. I think we have a lot of good players in our team, everyone can play and we try to make it very difficult for the coach as always.

“I’m trying to give my best too and to help the team to win games, titles—that’s the most important thing for me.” 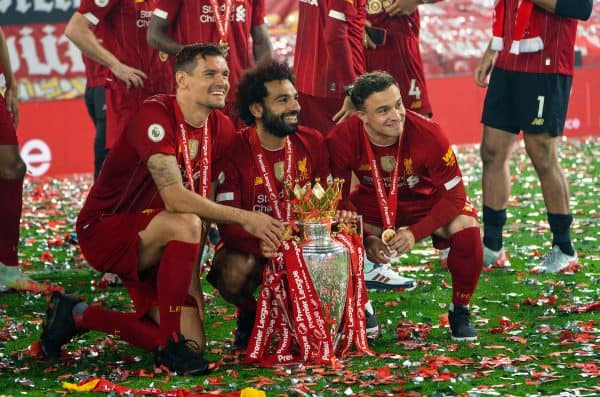 Shaqiri appears to have accepted his place as a squad player, but stressed his desire to compete with the likes of Divock Origi, Takumi Minamino and Rhian Brewster as they support the first-choice front three.

He is tied to the club until 2023, and in referencing his first-season form he served a reminder of the quality he can offer to Liverpool, having scored six and assisted five in 30 games in 2018/19.

It is an admirable statement from the Swiss, and there is no suggestion Klopp is looking to part ways with his No. 23, whose last start came in the 2-1 win over Monterrey at the Club World Cup in December.

“Everybody is excited to play again and to defend the season we had last season,” Shaqiri continued.

“It’s very difficult but we try to achieve again a lot of things and we want to win a lot of games.

“We have the capacity, we have the team who is still hungry and wants to win many titles.

“Of course it’s different in the Premier League than others, and I had the pleasure and I’m very proud of what I achieved in Germany with these two [titles] and I know many countries now.

“But with Liverpool, to win the title last season was unbelievable, something different after 30 years for the fans and for us too.

Liverpool are set to play two games a week for the majority of the campaign, due to the shortened nature of a season that kicks off in mid-September, and that could offer Shaqiri a route into the side.

Having a player of his quality in reserve should be considered a real positive, with Shaqiri having proven his ability to step in and shine, either in place of the likes of Sadio Mane and Mohamed Salah or alongside them.

His initial chances may come in the domestic cups, with the prospect of two League Cup ties to play in September, but strong form and consistent fitness could see him break back into the side on a more regular basis.