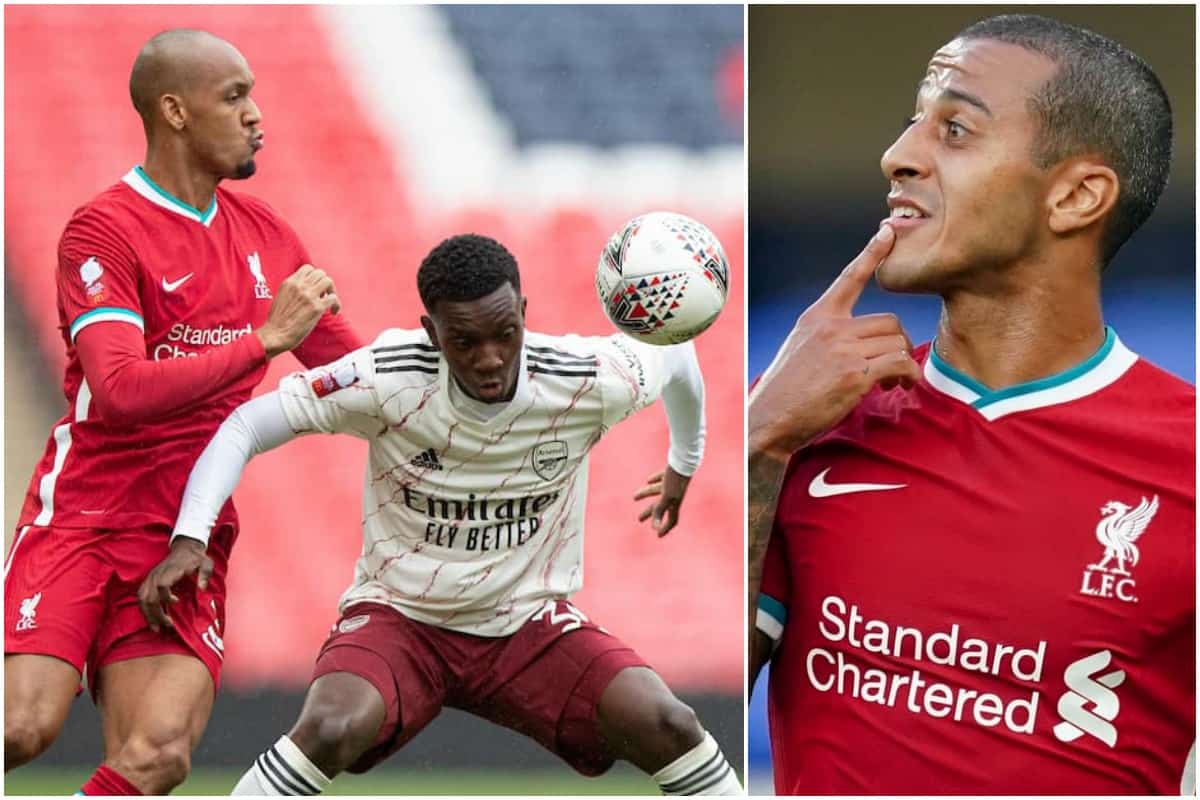 Arsenal are in high spirits ahead of their trip to Anfield on Monday, with supporters dreaming of a first win at the ground in nearly a decade.

Liverpool made it two wins out of two in the Premier League last time around, seeing off Chelsea in measured fashion at Stamford Bridge.

A 7-2 win away to Lincoln City in the League Cup followed on Thursday, before focus swiftly turned to the imminent visit of Arsenal.

Mikel Arteta is excelling as Gunners boss, steering them away from the much-mocked side they once were and adding organisation and steel to the team.

Monday’s meeting with the Reds promises to be an exciting clash, as the pair aim to keep up their 100 percent records.

With the match edging closer, we spoke to This Is Anfield’s regular Arsenal contributor Faisal Khan (@fkhanage) to hear his thoughts on both sides and the upcoming game.

How does it feel to be an Arsenal fan right now, positive again at long last?

I’m spoiled for words here – anywhere between good and orgasmic!

Unai Emery’s reign was toxic and in Mikel Arteta we have an intelligent and articulate coach, who we are all firmly behind.

There is a tremendous unity amongst the fanbase which we haven’t seen since Arsene Wenger was here. In the few months that Arteta has been at the helm, we have swung in morale, confidence and belief. Picking up silverware along the way has been a real unexpected bonus.

We have new-found belief, new-found optimism and we are so hopeful ahead of this new campaign.

What is it that Arteta has changed that’s made such a difference?

Everything. From day one, he built an immediate rapport with the fans with his opening press conference. He described Arsenal as the biggest club in the world and that we need to put the fear factor into clubs coming to play us, particularly at home.

Being an ex-player, he understands the values and traditions of our club and so he hit the right notes straight away. You can tell how motivated and driven he is by being so bold and he is here to lead.

Ambition is something Emery lacked, but Arteta has come in and said to signings like Willian, ‘our goal is to win the Champions League within three years.’

Some may cringe at that, but his belief is inspiring, and this must do wonders for confidence amongst the players.

Our play is immensely different. We have structure, we have discipline, we have a game-plan. It is so refreshing to see.

We would go into games under Emery (and Wenger) where we would just turn up and be expected to play ball. Now you can see so much more structure in the team, such as straight lines, spaces between players, synchronised movement and an effective press.

We are becoming better defensively and are much harder to beat – under Mikel, we have kept a clean sheet or conceded just one goal in 25 of 31 games. This is so much better than where we were.

He has also managed to improve players. Our centre-backs look like they can defend again, our midfielders are playing with confidence and composure – look at Mohamed Elneny’s renaissance at Wembley – and our youngsters are getting good game time.

Arteta has reinforced belief, similar to what Jurgen Klopp did with his whole “doubters into believers” speech.

He has had the same impact. We have already beaten so many of the top sides in his time here, who knows what we might achieve.

Who do you view as the Gunners’ three most important players?

There are so many players who need to have a strong season, for so many different reasons, so it is difficult to focus on just three.

We start with captain Pierre-Emerick Aubameyang: a deadly goalscorer, a team player and very much our talisman. Renewing his contract was crucial and, once again, credit to Arteta for convincing him to stay, despite offers from Barcelona and Man United.

Keeping Aubameyang fit is key for us as I expect him to win another Golden Boot. Lethal on his day, and when he is in the mood he is unstoppable.

I think David Luiz is also a very important player. He is a leader, he is well-respected and he will be key to helping newcomers Gabriel and Saliba settle in at the back.

A vastly experienced defender – one admittedly capable of making huge mistakes – he has such a strong and positive influence on the dressing room. You can see the bond he has with Arteta and this is very important.

I will go with Nicolas Pepe, too. Joining Arsenal for £72million last summer put a lot of pressure on him, but while he has had moments of brilliance, he still has a lot to do.

This season is the acid test. I think he has all the talent to become a world-beater, but he is not a regular starter now, so there must be more to it. Once he clicks, and secures a starter spot, with confidence, he will be unplayable. Watch out.

What will constitute a good season for Arsenal overall? 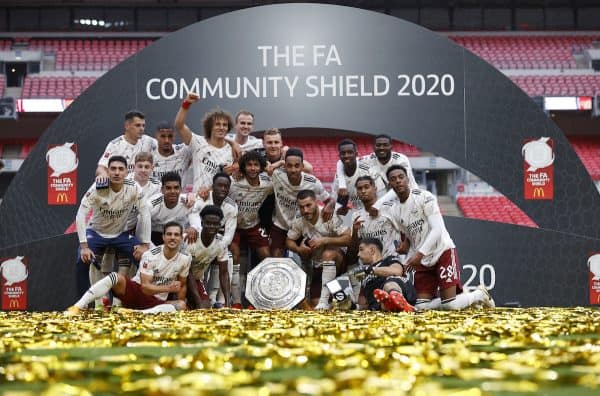 Look, I want to win the Premier League title, this must be our main objective every season because it is built within the values of our club. But it is fair to say we are still some way behind Liverpool and Man City.

Chelsea have spent a lot, too. I think ‘success’ for us, given our recent transition, would be qualification for the Champions League and more silverware.

I think we are capable of finishing in the top four, winning the Europa League and winning the FA Cup again. If we do all of these, it will have been a sensational season.

To put it simply, yes. I think Liverpool are the best team in England.

Klopp has proved that he is a great manager and your club have made one signing that immediately made me think you’ve secured this season’s title: Thiago.

I think it was a couple of years ago that I tipped Fabinho to take you to the next level and he absolutely did.

Thiago is a wonderful, wonderful player: a monster of a No. 6, tremendously difficult to press because he is so intelligent and quick with the ball. He is a recycling machine and I think a midfield trio of him, Fabinho and Jordan Henderson has everything.

It wouldn’t surprise me if you did the Premier League and Champions League double this season. Sincerely.

It’s difficult, as always, to look beyond your wide forwards. Mohamed Salah and Sadio Mane are capable of turning matches on their own and so we have to suffocate the supply.

That is easier said than done, though.

Both teams have potent finishers, so I think the key battles will take place in midfield and at set-pieces.

Thiago, Fabinho and Henderson is a perfect trio, full of competence, intelligence, strength, finesse and ball players, so Granit Xhaka and Dani Ceballos will have their hands full.

I’m not really sure how Arteta will line up – maybe Elneny goes in there or maybe we stick with our 3-4-3 formation in possession and pin your full-backs back.

It will be intriguing. 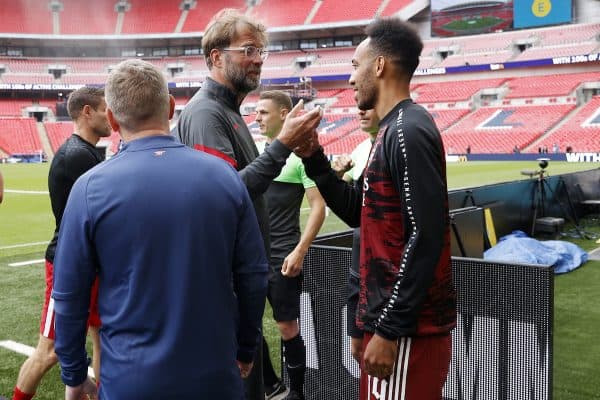 Playing in an empty stadium will help and I just hope you don’t score first and early.