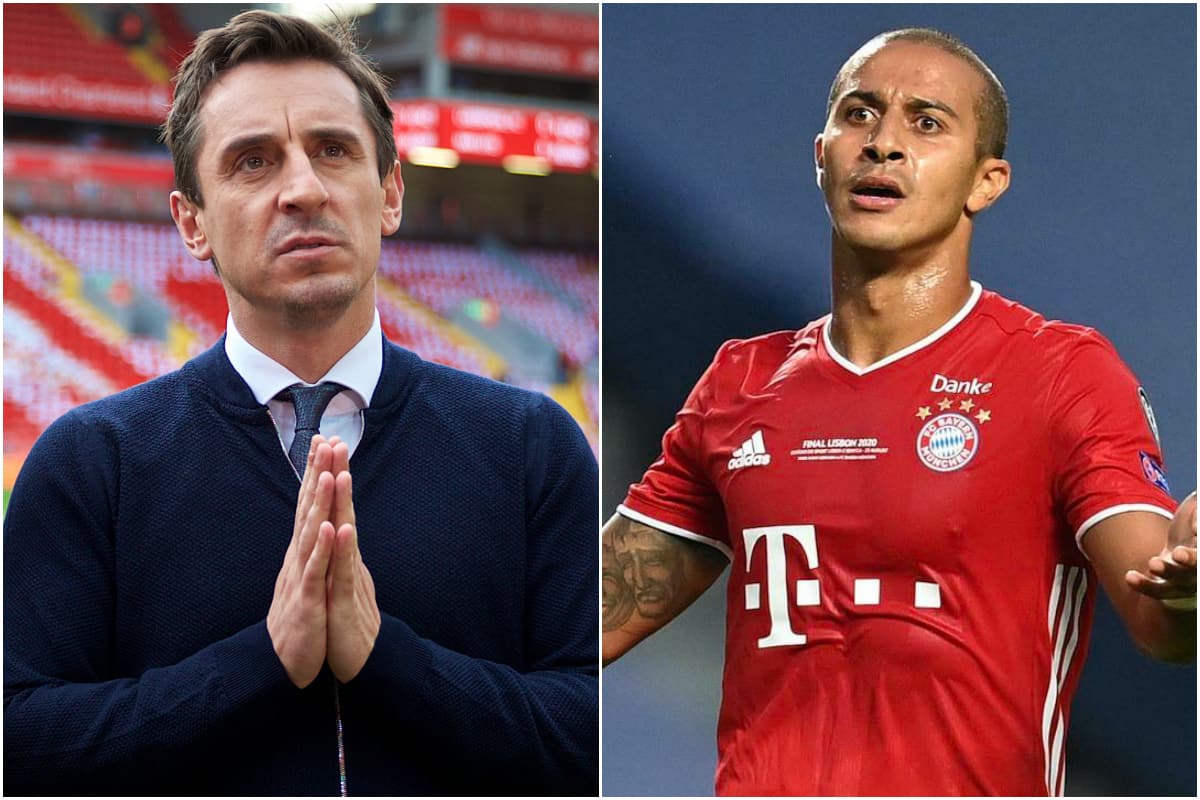 Gary Neville believes signing Thiago Alcantara could “stimulate” Liverpool to retain the Premier League title, and it would need a “superhuman effort” without him.

The Reds won their first title in 30 years at a stroll last season, finishing 18 points above second-placed Man City and 33 ahead of both Man United and Chelsea.

But with all three sides bolstering their squads with big-money signings this summer, the title race is expected to be closer this time around, though Jurgen Klopp insists his squad consistency can be an advantage.

No supporter would argue that Liverpool need a major overhaul in order to clinch back-to-back triumphs, but the consensus is that one or two additions, and namely Bayern Munich’s Thiago, would make the Reds favourites again.

Neville is seemingly of that belief, too, with the former Man United right-back, who won the Premier League eight times including three times retaining the title, explaining the situation to the Telegraph.

“It wouldn’t be ridiculous to suggest there will be a slight drop-off, if they don’t somehow stimulate that squad by doing something,” he argued.

“It is a huge emotional drain on the group of players for three years.

“To ask them to go again and achieve that same standard would be a superhuman effort, getting them to do the same thing without amendment to the squad to give them that lift again.

“That is where signing Thiago would give the big one to Liverpool—to send a message to the rest of the players that we’ve signed one of the best players in the world in that position.”

Neville is not wrong, as it is almost unprecedented for the same squad to keep winning without the impetus of added competition, even though the clamour for signings is amplified to a ridiculous extent in the modern era.

Midfield is the one area that Liverpool do not have every role nailed down to a guaranteed starter, with Alisson settled in goal, the first-choice back four established and no player supplanting Mo Salah, Sadio Mane and Roberto Firmino in attack.

Klopp has a variety of top-level options in the middle, most notably Fabinho, Gini Wijnaldum, Jordan Henderson and Naby Keita, but the manager often varies his selection dependent on form and fitness.

As Neville continued, he underlined why signing Thiago would add a “world-class” solution to the one area that could be seen as an issue.

“They need that impetus to stay where they are.

“I could be wrong—they could deliver exactly what they did before—but looking at history it doesn’t work like that usually.”