A new selection headache at centre-back has emerged for Jurgen Klopp as injuries continue to mount in the position ahead of West Ham’s visit in the Premier League.

The Reds were already on a fitness knife-edge in the heart of defence before Fabinho became the latest to be forced to sit on the sidelines, leaving Joe Gomez as the last senior option standing.

With Liverpool having proven to opt for caution over returning players, Klopp is likely to turn to youth at Anfield – but the captain could yet be set to move deeper.

It is likely to rest on who is available in the middle of the park, however, following on from a four-day break post the 2-0 win over Midtjylland on Tuesday.

West Ham are to prove a testing opposition after a run of four games unbeaten, which includes draws against Tottenham and Man City and a convincing win at Leicester.

Here’s how Klopp could lineup his side against the Hammers in the Premier League.

Life at the back, at least in the short-term, took another sizeable hit after Fabinho pulled up with a hamstring injury after the half an hour mark in midweek – following on from Virgil van Dijk earlier this month.

With Joel Matip having sat out the last three games with a mystery injury, Gomez quickly became the sole senior option in the position and could be partnered with Rhys Williams, Nat Phillips or even Jordan Henderson on Saturday.

Ahead of the match, Klopp told reporters: “Fab is not in he got a little injury so he will be out for the weekend and slightly longer.”

The boss also gave a nod to 17-year-old Billy Koumetio‘s availability after the Frenchman recovered from an injury setback as he conceded we now “have to make decisions” at the back.

No update was provided on Matip or Kostas Tsimikas and Klopp simply stated that “we will see” over the availability of both Thiago and Naby Keita.

All eyes will be on the selection at centre-back and it could very well be that Williams earns his maiden Premier League start alongside Gomez.

The 19-year-old was a composed presence in midweek and the absence of the in-form Michail Antonio will come as somewhat of a boost – with the forward having scored 11 goals in his last 13 appearances.

The pair will be accompanied by Alisson, who will prove integral in guiding his young defence, and Andy Robertson and Trent Alexander-Arnold – the latter of whom is set for his 100th league appearance.

In midfield, a timely return of Thiago could see the defence provided with adequate protection alongside the likes of Jordan Henderson and Gini Wijnaldum.

And having sat out the majority of the win over Midtjylland, the front three of Mohamed Salah, Sadio Mane and Roberto Firmino should be raring to go in a side that looks like this: 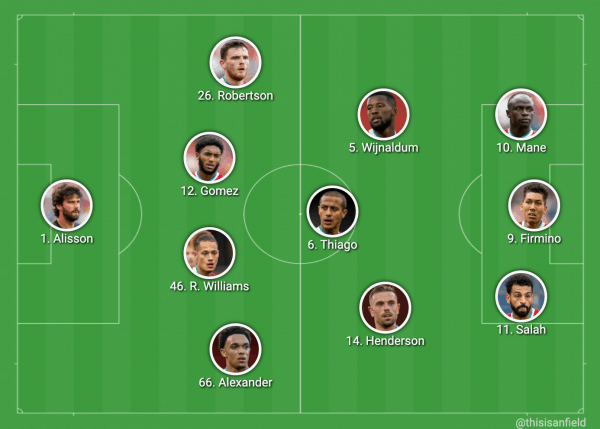 If the boss is looking for a more senior head across the back-line, however, he could task his captain with the job.

Henderson played alongside Gomez in the Club World Cup semi-final in 2019 and has the attributes to settle in on and off the ball as the Reds navigate life with just one senior specialist.

The remainder of the defensive line would remain in-tact from midweek, where Klopp could opt for a 4-2-3-1 system once more.

It would see Thiago and Wijnaldum deployed in the double-pivot, with risk over the Spaniard deemed acceptable amid a hit to personnel.

Diogo Jota continues to put a strong hand up for selection with two goals in his last two starting appearances, and here he could sit on the right alongside the front three as he did against Sheffield United: 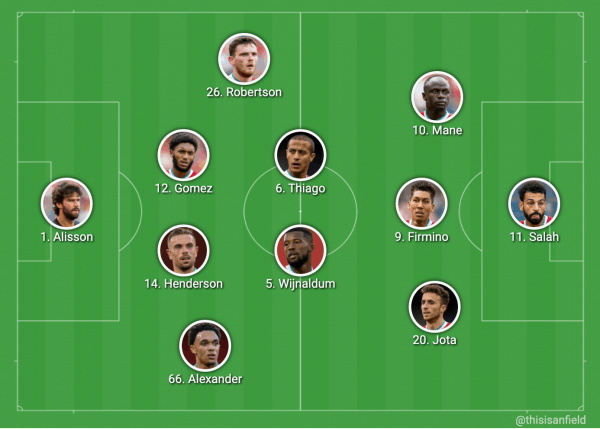 The matchup makes for yet another interesting decision to be made in the starting XI in what is Liverpool’s fifth of seven games within the space of 22 days.

West Ham will no doubt be eager to get at the Reds and as such intensity on and off the ball will be a non-negotiable to protect the back-line as much as possible.

In saying that, Liverpool have more than enough firepower to hurt the Hammers and a fourth win on the bounce will prove to be a significant boost to confidence and momentum.