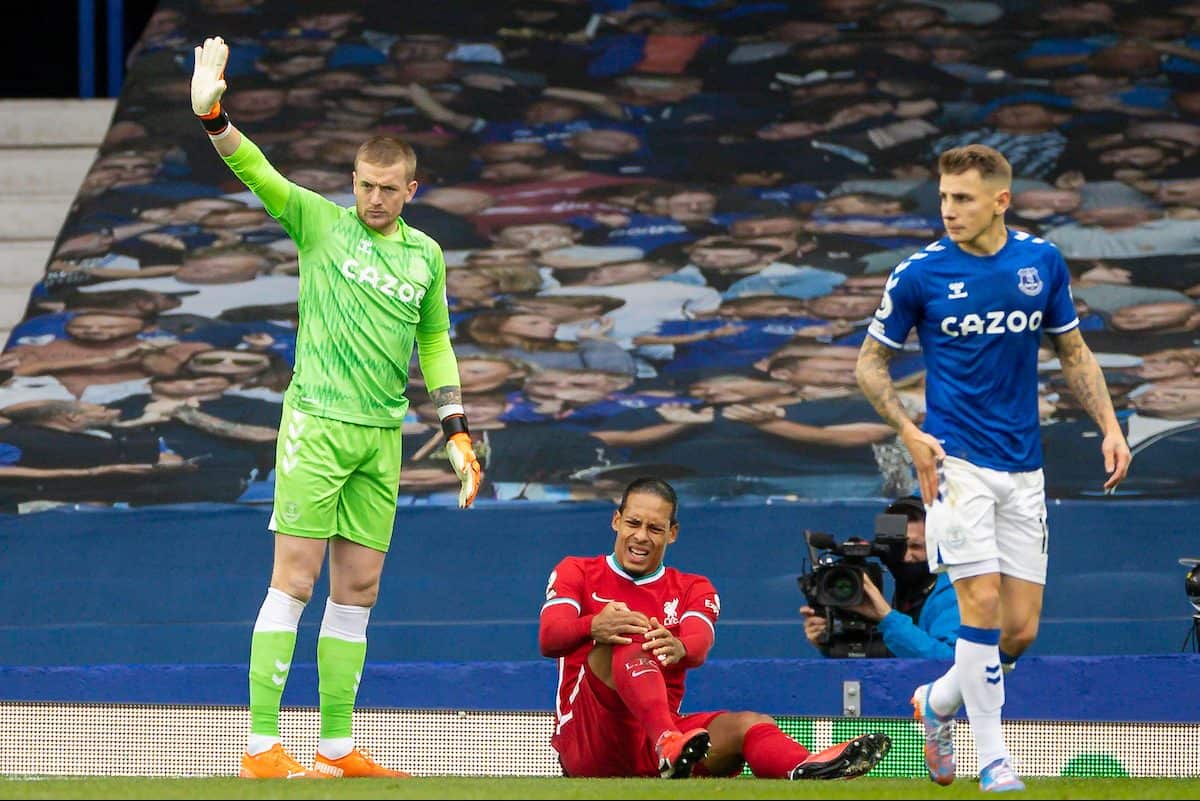 Jurgen Klopp has provided a worrying update on Virgil van Dijk‘s fitness after a shocking challenge from Jordan Pickford, saying while it is unclear, “it is not good.”

Van Dijk was forced off the pitch early into Saturday’s 2-2 draw with Everton after being scythed down by Pickford in the penalty area, with VAR David Coote ruling it as an offside.

There was no foul called, nor any action against Pickford, with the game played on as if the tackle never happened, the only evidence images of Van Dijk walking to the treatment room alongside physio Steve Lilley.

It was the first of a number of controversial and downright wrong decisions throughout the derby, which should have been decided by a late strike from Jordan Henderson, only for Sadio Mane‘s elbow to be flagged for offside in the buildup.

And now Liverpool could be without Van Dijk for an extended period, with Klopp’s initial assessment hinting at a layoff for his No. 4.

“Virgil, it is not good,” he said, having assessed Pickford’s lunge as “not a challenge the ‘keeper can do.”

“He plays on with pain, he never misses a game. I don’t know how bad it is but it is not good.”

As Klopp attests, that Van Dijk was even unable to play on at Goodison suggests it is a serious issue for the Dutchman, and it comes on the back of a long-term injury for Alisson.

Alisson is not expected back until the trip to Atalanta on November 3 at the earliest, and it appears likely that Liverpool could be without both him and Van Dijk for that period.

The Reds could also be missing Thiago, after another shocking tackle that earned Richarlison a straight red card late into the second half.

Klopp added: “When we were walking off, Thiago tells me he thinks he was injured. We will have to see.”

Given the disappointment at the officiation from Coote and referee Michael Oliver, this only adds to the frustration felt after a Merseyside derby that Liverpool should have emerged from as victors.

Now the Reds could be without three key players for a congested run that will see them play six more times in 18 days, starting with the Champions League opener at Ajax on Wednesday.