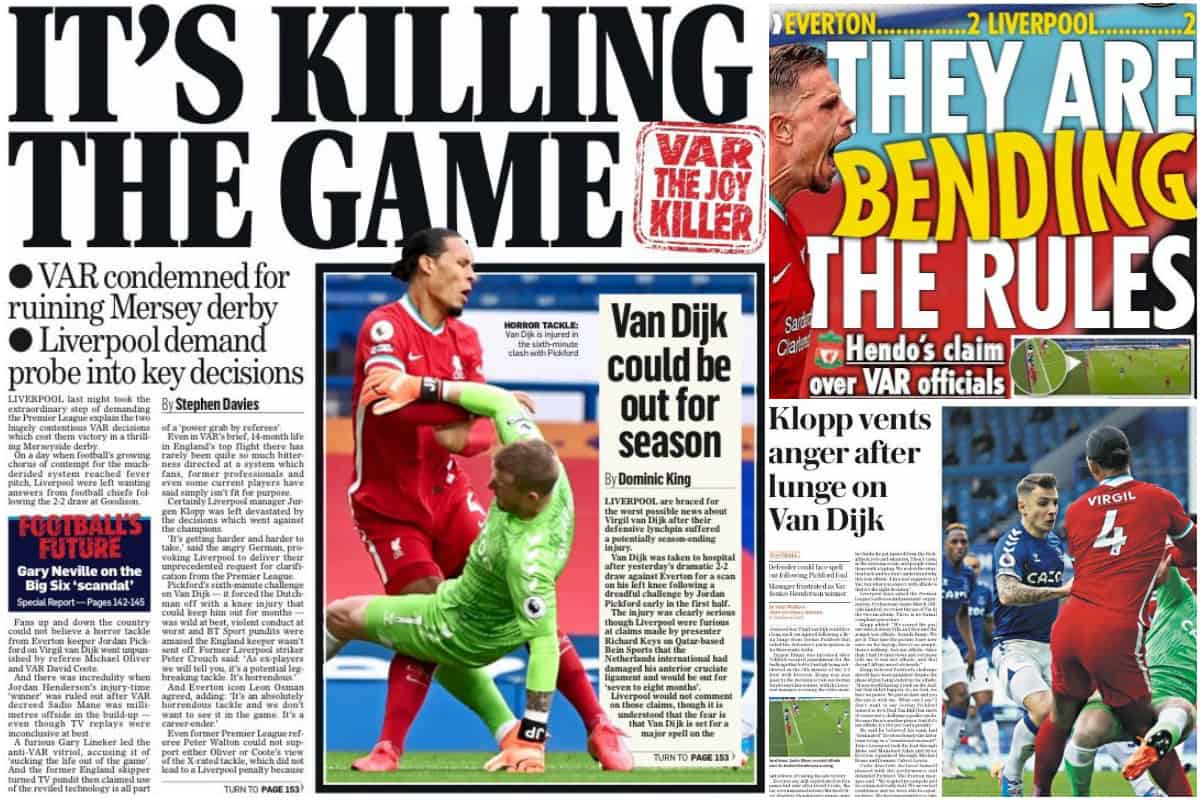 The media were impressed with Liverpool’s “strong response” and Thiago’s display, but had sympathy after VAR robbed the Reds in the controversial 2-2 draw at Everton.

VAR ruined the 237th Merseyside derby and deprived Jurgen Klopp’s men of what would have been a deserved three points at Goodison Park.

Jordan Henderson saw a late winner ruled out for a farcical ‘offside’ on Sadio Mane, denying Liverpool victory from a game in which two match-changing decisions wrongly went against the Reds.

If the result wasn’t satisfying, the overall performance was, as Liverpool responded to their Villa Park humiliation by returning to form with a reassuring performance.

A game full of talking points, the media provided plenty of analysis, including on a much-improved performance, Thiago’s full debut and…you guessed it, VAR.

The Independent’s Melissa Reddy was among those impressed by the bounce-back display, noting how the Reds rediscovered their identity as the “intensity” in performance returned:

“On the five-year anniversary of Jurgen Klopp‘s first game in charge of Liverpool, his men illustrated one of the core characteristics he has infused in them: a strong response to setbacks.

“They were annihilated 7-2 last time out by Aston Villa, their heaviest defeat in 57 years, but returned to intense, impressive type here. That after losing their best defender – who had played every minute of the prior 74 league games – before double digits were even on the clock.”

ESPN’s Danny Lewis also thought Liverpool responded excellently and was impressed by how Klopp’s men showed a strong mentality in controlling the game:

“Liverpool’s brilliant start was exactly what they would have wanted on such a big occasion – especially after the 7-2 defeat at Aston Villa before the international break.

“The visitors were able to control the ball for large periods of the game and carried a major threat.”

The Mail’s Rob Draper focused on the welcome return of the Reds’ suffocating pressing game and felt Everton struggled to cope with the intensity overall:

“For Liverpool, there was an emphatic response to the thrashing at Villa Park. Their intensity in the opening 15 minutes was such that Everton could barely get near them.

“Champions Liverpool, humbled two weeks ago by Aston Villa, seemed intent on righting wrongs. Jordan Henderson, Sadio Mane, Roberto Firmino and Fabinho fairly flew out of the blocks. The Liverpool press, which just never functioned at Villa Park, seemed to be back and turned up to eleven.”

Thiago brought “class to the chaos” as he dominated midfield with passes “of the highest standard,” in the view of the BBC’s Phil McNulty:

“In Thiago, Liverpool have added a midfield controller to the side that won the Premier League at a canter last season. He was composed and some of his picked passes were of the highest standard, looking an absolute snip at £20m from Bayern Munich.”

The Mirror’s Alex Milne assessed that the No. 6 “oozed class” and showed how he will bring another dimension through his playmaking abilities:

“Thiago Alcantara showed why Liverpool have splashed the cash on him as made his first start for the club at Goodison Park.

“In the second half his confidence seemed to grow, and he began to set the tempo and spread the play with a wide range of passing. The 29-year-old simply oozes class, and will only continue to improve as he settles into Jurgen Klopp‘s side.”

Writing for the Independent, Karl Matchett was impressed with Liverpool’s midfield as a collective, assessing that the Reds’ central trio dominated their opponents:

“The Liverpool midfield had control and the better individuals right from kickoff, dominating play when the home side tried to play through or play out.

“It resulted in Everton’s best attacking moments only coming when they went more direct, bypassing the middle third and instead targeting the Reds’ fragile back line.”

Elsewhere, Lewis saw Andy Robertson in good form, noting how the left-back excelled in his work at both ends of the pitch:

“Such a threat down the left for Liverpool, picking out Mane for the opening goal of the game. He also put in a strong defensive performance, making a last-ditch challenge on Calvert-Lewin.”

And Football365’s Sarah Winterburn thought Mane showed his ever-growing importance on his return, assessing that the No.10 brought “everything that was missing” against Villa:

“It was Sadio Mane who probably had the greatest influence on the game, showing why he is likely Liverpool’s most important player.

“Everything missing from Liverpool against Aston Villa was there from the first moment at Everton – the pressing, the movement, the energy, the slickness of passing – and Mane was at the centre of it all.”

First of all, McNulty – along with almost everyone watching around the world – was flabbergasted at how Pickford “somehow escaped” being sent off for wiping out Virgil van Dijk:

“When Everton were 1-0 down, he somehow escaped a red card for a challenge on Van Dijk that was dangerous enough to force Liverpool’s defender off, with the Dutchman looking in much discomfort as he made his way around the pitch.”

The media were unanimous in their belief that VAR had a nightmare, with Milne explaining how and why the application of the technology from officials “desperately needs looking at”:

“Even though the Liverpool defender was flagged as offside in the build-up to the incident, the rules state that a player can still be sent off for violent conduct in such an instance. Although VAR was used at the time, it has been confirmed that this was to check on the offside, and not on whether or not Pickford should have been given his marching orders.

“It is yet another example highlighting that VAR still has issues which desperately need looking at.”

Matchett criticised the inconsistency in the decision-making of Coote and on-pitch ref Michael Oliver, particularly in how Richarlison was sent off in the exact circumstances Pickford should have been:

“Given the replays available and the wild nature of the lunge, it seems impossible to comprehend how the eventual consensus there was that no, Pickford’s challenge didn’t warrant a red – while Liverpool lost their best defender to injury because of it.

“Even more pointedly, Richarlison’s own awful tackle saw him sent-off…after the whistle had gone for a slightly earlier foul by a team-mate.”

The Mail‘s Oliver Holt rightly stated that this episode and the general failure to get key, game-altering decisions right only further erodes any trust in VAR:

“It is one of the ironies of VAR that we are asked to trust the system when it makes judgments that rely on margins we measure in millimetres and yet it cannot be trusted to get it right when a 6ft goalkeeper flies into the picture and takes an opponent out almost at the waist.”

“That he was able to walk off rather than leaving on a stretcher may be a hopeful sign his injury is not too bad, but as soon as he had gone, the air of authority with which Liverpool had begun the game disappeared as well.”

The Independent‘s Miguel Delaney thought signs of struggle without Van Dijk were already clear to see as Everton scored twice from situations where the Dutchman’s presence would have helped:

“Without Alisson and Van Dijk, it was a return to the 2017-style defence that so undercut Jurgen Klopp’s attacking. You could sense the uncertainty any time a ball – and particularly a James ball – was sent towards the box. Liverpool were also shorn of that assurance. This was the source of both goals.

“Many might say Van Dijk wouldn’t have actually been in that area if he had been on the pitch, but what actually makes him so good as a defender is the effect he has on the entire backline as much as what he does individually.”

The Mirror‘s Jake Polden explained how the Reds now – likely – face a new and difficult task in having to get by without Van Dijk and Alisson:

“The 7-2 defeat by Aston Villa showed how finely poised Liverpool’s success is on Jurgen Klopp‘s regular starting XI being fit. Alisson is still out injured for the Reds, and he will now be joined in the Melwood physio room by Virgil van Dijk.

“Liverpool’s defence is built on the notion it is impenetrable with Van Dijk at the back, and his absence – however long – will be a huge miss for the Reds.”

Finally, Matchett saw more concerns with Adrian, noting how the Spaniard should have done better with keeping out Michael Keane’s opener and “lacked confidence” throughout:

“Adrian seemed to actually get smaller rather than taller for Keane’s headed equaliser and clearly lacked confidence in dealing with other high balls.”