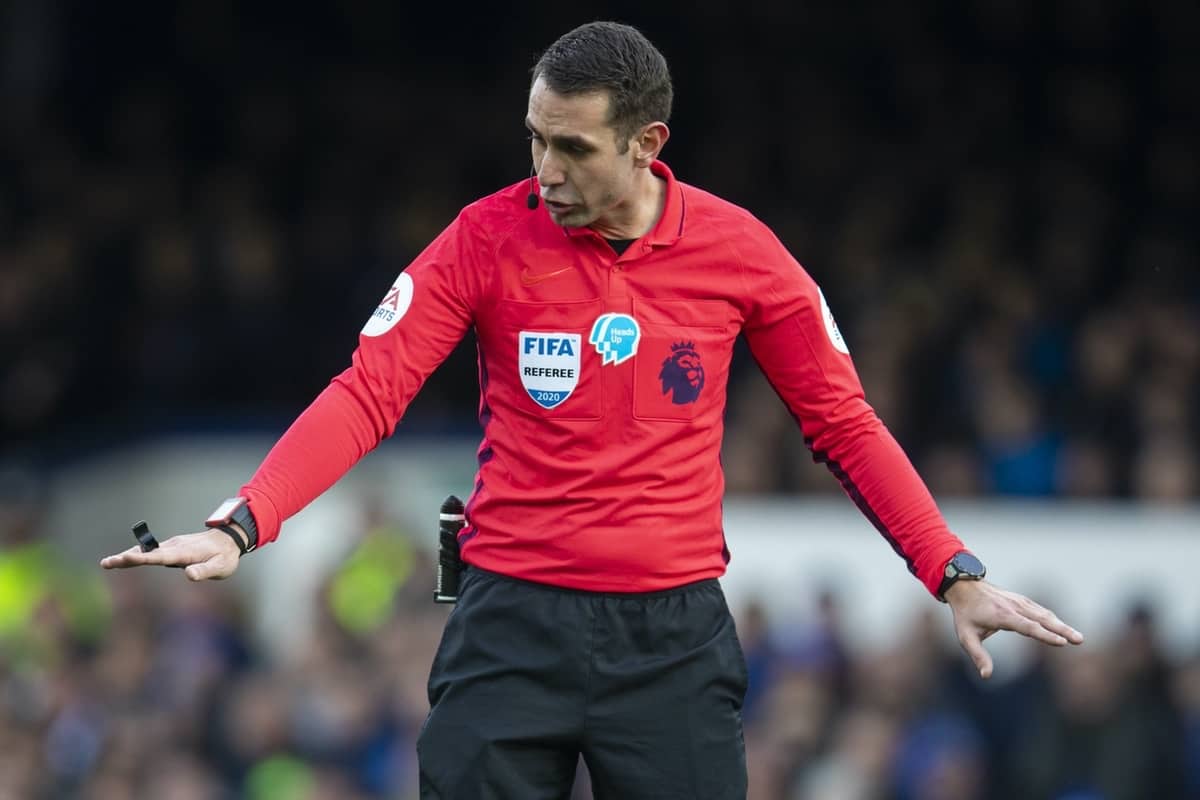 A month after his disastrous performance as VAR for the Merseyside derby, David Coote has been named in the role for Liverpool’s clash with Leicester on Sunday.

Coote was roundly criticised for his lack of awareness in the 2-2 draw at Goodison Park in October, namely having overlooked a season-ending challenge from Jordan Pickford on Virgil van Dijk.

Not only did Coote ignore the tackle from Pickford, instead only focusing on a marginal offside in the buildup to the collision, but he also came under scrutiny for ruling out a late winner for Jordan Henderson.

Liverpool requested a Premier League investigation into the use of the technology in the derby as a result, and the official was removed from referee and VAR duties for the following weekend’s fixtures.

Back as a referee the weekend after, Coote was then back at Stockley Park for the next round of games, with the concerns from the Merseyside derby largely falling on deaf ears.

Now, with Liverpool preparing to take on Leicester at Anfield on Sunday, Coote has been restored to duties for a Reds game for the first time since that afternoon at Goodison, and, typically, this comes as VAR.

Chris Kavanagh will be referee for the visit of Brendan Rodgers’ table-toppers, with Daniel Cook and Marc Perry as his assistants, Paul Tierney as fourth official and Nick Hopton as assistant VAR.

It will be the eighth time Kavanagh as been given the whistle for a Liverpool game, with Jurgen Klopp‘s side winning all six of the games in the league, including a 2-1 win over Leicester last October.

But, unsurprisingly, the focus for Reds supporters was the involvement of Coote, with many taking to social media to criticise the decision:

David Coote is the VAR official for Liverpool vs Leicester at the weekend.

Is this some sort of sick joke? pic.twitter.com/yNODF4JDaF

"If I speak, I'm in big trouble" pic.twitter.com/uJoTGyhWNk

David Coote is our VAR referee for our next match vs Leicester City. I can't believe it. After the Everton match debacle I thought PL would know better

Chris Kavanagh will referee Liverpool v Leicester on Sunday & David Coote will be on VAR.

Unbelievable that Coote is allowed to be anywhere near our games after the recent stuff involving him. Absolute piss take that.

Less than a month later and David Coote is back on VAR this weekend in the Liverpool v Leicester game. There is literally zero accountability for terrible decisions. One weekend off and he’s back ???? pic.twitter.com/kUcGFgSFGs

As if they've allowed David Coote to be on VAR for our game on Sunday ???

ESPN report that Liverpool have been worst-affected by VAR decisions across the Premier League so far this season, with the most goals disallowed, penalties conceded and, overall, decisions against them by use of the technology.

The issue with VAR is not the technology itself, however, but those using it, and it should be a concern that an official who somehow managed to neglect a shocking challenge due to a blinkered focus on an offside call can be put in the same position just a month later.