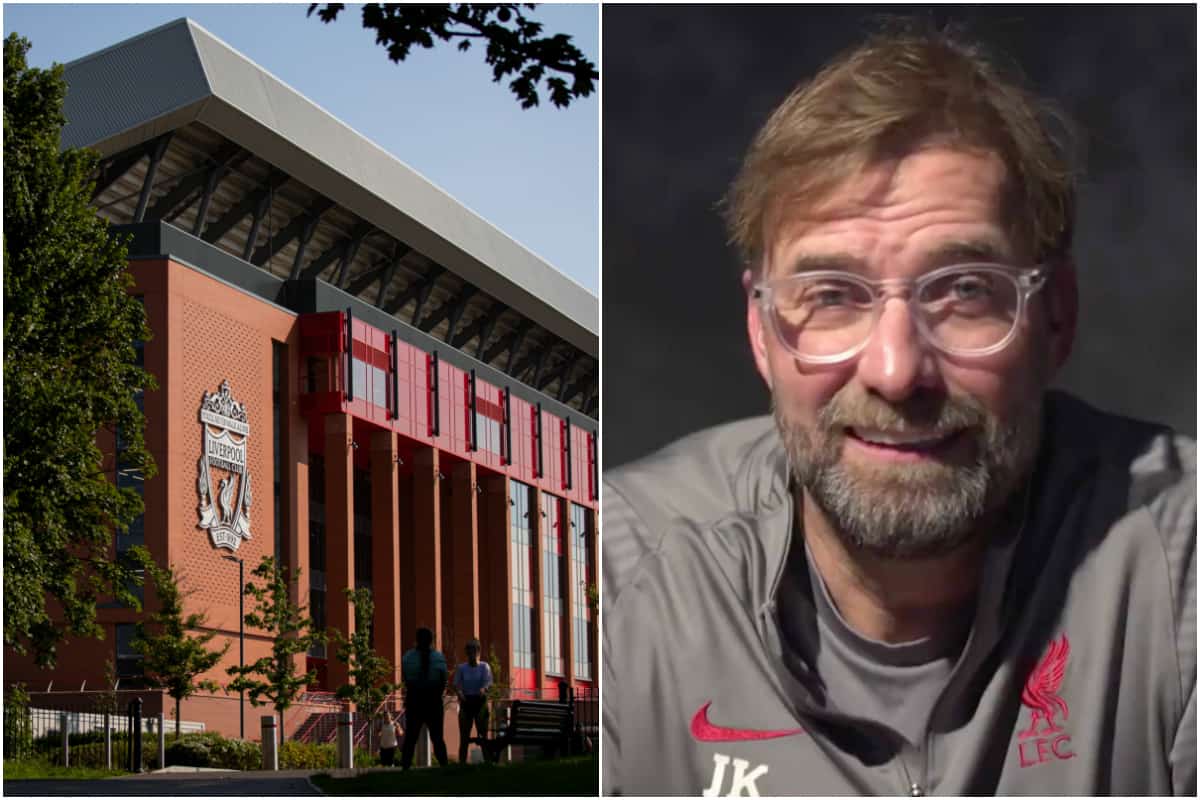 With Liverpool used as the base for a mass-testing scheme for COVID-19 this month, Jurgen Klopp has urged the people of the city to take part and “start the fightback.”

It was announced earlier this week that the city would be the base of a new scheme, with free COVID-19 tests offered to those living and working in Liverpool.

Everyone in the city is encouraged to be tested, though those already displaying symptoms should not attend any of the seven testing centres, with Anfield one of those sites.

The scheme is expected to last for 10 days, and the following test centres are opening from Friday, with doors open from 9am to 7pm:

Liverpool have issued their backing to the scheme, which is designed to pilot a rollout of mass testing across the UK in order to manage the virus and help the country return to normality.

And in a video released on Thursday, Klopp urged the people of Liverpool to take part, using the Premier League‘s success with testing as an example.

Jürgen Klopp with a message for the people of Liverpool…

“This is a message for the people of Liverpool. For you. Let’s start the fightback against COVID. Let’s get tested,” he said.

“If you live or work in Liverpool, you are able to be tested as part of the city-wide testing rollout.

“Regular testing has kept the Premier League going, and allowed us to be out on the pitch every week.

“It takes 10 seconds to take a test, and 10 days to make a difference. Let’s help Liverpool get out of tier 3.

“Do it for yourself, your family, your colleagues and your city. Let’s do it together; let’s do it for Liverpool.”

For the first day, all the centres will accommodate walk-ins.

Testing slots can also be booked via www.gov.uk/testliverpool or using the NHS COVID-19 app. People are advised there may be queues at these locations.

Hundreds of thousands of tests will be made available over the trial period which will include:

“Positive results from tests will be collected by NHS Test and Trace and published as part of the daily case numbers, including how many positive cases are detected with this new method of testing.

“Results will be received from NHS Test and Trace via text and email. Anyone coming for a test should bring a mobile phone with them.

“Anyone who tests positive, using either a lateral flow test or an existing swab test, must self-isolate along with their household immediately and their contacts will be traced.

“Those who test negative will need to continue to follow all national guidance.

“In addition, anybody testing positive via the lateral flow testing may be asked to take a second confirmatory PCR test.

“These more advanced tests will help identify infectious individuals who are not displaying symptoms and help find more positive cases so they can self-isolate and prevent the virus from spreading, in a first step towards rolling out mass testing more widely across the UK.”

With the country in lockdown, mass testing is currently the best solution to restoring the UK to normality amid the COVID-19 pandemic, and Klopp’s message is clear: get tested and help the city of Liverpool.

For more information on the city-wide rollout of mass COVID-19 testing, click here.