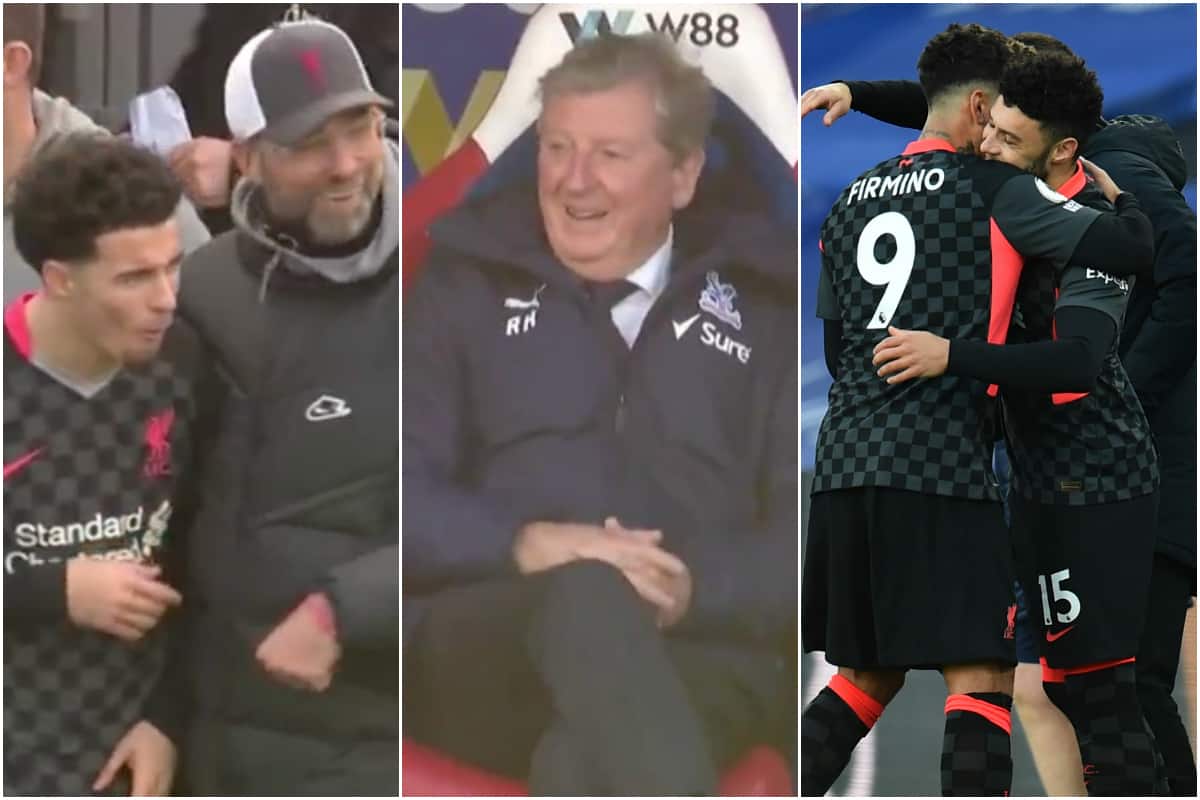 Liverpool produced a performance that left Curtis Jones saying “wow” as they put Crystal Palace to the sword with a record-breaking 7-0 victory on Saturday.

This came despite periods of sloppy play at Selhurst Park, with Palace having opportunities to at least level the score when it stood at 1-0.

But overall in was a brilliant performance from the champions, with every goal worth rewatching again and again due to their quality.

Beyond the goals, though, it was an afternoon to treasure for a number of reasons, and here are five other eye-catching moments we’ve picked out from Liverpool’s record win at Palace.

The best one-two ever?

From back-to-front in blistering speed ?

This Liverpool side can hurt you in so many ways… pic.twitter.com/ToYihAUU7O

Bobby’s first of the afternoon was a sumptuous finish which capped a first half that saw Liverpool play second-best for a lengthy spell but crucially take their chances to lead.

A moment of counter-attacking magic from the Reds, it came via a one-two played over almost the entire length of the pitch as Firmino kicked it all off.

Playing it wide to Andy Robertson, the No. 9 then charged forward and collected it back from a pitch-perfect cross and, with two touches, steered it past Vicente Guaita for a goal even better than it first looked.

Was that the best team performance of the season? pic.twitter.com/qgcAaSKIxI

Enough time and trophies have come in the near-decade since his exit that Liverpool fans can now almost looked on Roy Hodgson with warmth.

There is a likeable quality to the Palace manager, generated over his years of experience, that paints him as something of a grandfather figure in the Premier League.

And though his side were on the receiving end of a tanking, Hodgson couldn’t help but laugh at the extent of Liverpool’s dominance – with Palace futile to resist and their boss well aware of that.

Ox back with an assist

There are no words ?

Mo Salah makes it ????? and this is the pick of the bunch ? pic.twitter.com/kph0gy8UNS

After four months out with a knee injury, Alex Oxlade-Chamberlain made his first appearance of the campaign as he replaced Firmino midway through the second half at Selhurst.

It was a big moment for both player and club, with Oxlade-Chamberlain hopeful his fitness issues are now behind him, and the midfielder made an impact soon after coming on.

Though it was a simple ball that saw Salah do the rest with a sublime finish, Liverpool’s No. 15 tallied a comeback assist that ensured seven different players teed up goals for their side for the first time ever in a Premier League game.

The reactions of Jurgen Klopp and Curtis Jones as Liverpool go five-up ? pic.twitter.com/CqEnX5P62C

Sometimes all you can do is stand back and admire, and that is exactly what Klopp and Jones did as Bobby made it 5-0 with his chip over Guaita.

With Jones waiting to come on, the pair soaked it all in and the 19-year-old could be seen saying “wow…wow,” after sharing a fistbump with his manager.

No doubt every Liverpool fan had the same reaction!