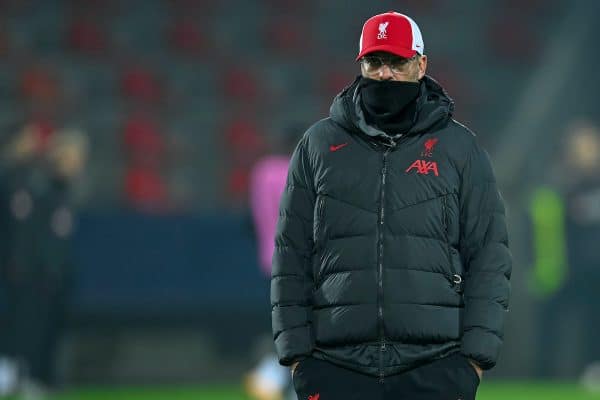 Jurgen Klopp reflected on a number of “long” VAR checks on a “cold” night at Midtjylland and admitted he is no longer certain its use in football is a “good idea.”

Liverpool were held to a 1-1 draw by their Danish opponents on Wednesday night, with their final group game of this season’s Champions League dogged by VAR calls.

The first came as Caoimhin Kelleher brought down Anders Dreyer for the equalising penalty, with the Midtjylland forward initially flagged as offside but, after a lengthy review, this was overruled and the spot-kick awarded.

Then Midtjylland believed they had grabbed a winner through Alexander Scholz, only for another long pause to adjudge the centre-back to have been offside.

Finally, Takumi Minamino had the ball in the back of the net in the last minute of normal time, but again, VAR intervened and ruled the goal out due to a supposed handball from Sadio Mane in the buildup.

A number of breaks in play led to eight minutes of stoppage time being added onto a game that had no bearing on Group D, but in reality it should have been more.

And asked about the influence of VAR in this game and elsewhere, Klopp expressed that he was changing his mind on whether it is a “good idea.”

“I haven’t seen it back but it took too long and it was really cold,” he said of the penalty decision.

“It’s really hard. I used to be one of the people who said VAR is a good idea but I’m not sure I’d say that again.”

Klopp’s comments are a reflection of a commonly shared view that, while well-intentioned, the use of VAR is now detracting from the enjoyment and purpose of football.

There appears to be little in the way of consistency in terms of the rules, while the manner in which reviews are made has led to continued controversy, particularly in the Premier League.

It had largely been the case prior to Wednesday night that the Champions League served as a reprieve from the farcical calls influenced by VAR, but this served as a reminder that its implementation is flawed across the board.

Brought in to address ‘clear and obvious’ errors, the point of VAR seems to have been lost somewhere along the way, and Klopp is right to question its validity.