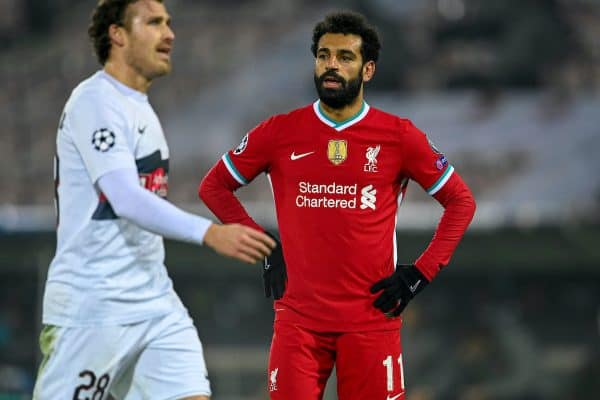 Klopp lauds “exceptional” Mohamed Salah for breaking “one record after another”

Jurgen Klopp praised Mohamed Salah after a record-breaking night in Denmark but was less impressed with VAR and admits he is changing his mind over its application.

Salah took just 55 seconds – the club’s quickest Champions League goal – to score his 22nd in the competition and surpass Steven Gerrard as the Reds’ leading scorer in the 1-1 draw with Midtjylland.

But in a frustrating second half three VAR decisions – one which awarded the hosts a penalty to equalise through Alexander Scholz, another which denied the Midtjylland goalscorer a second and a third which chalked off what would have been a late winner for Takumi Minamino – affected the flow of the game.

Klopp could not be happier for Salah, however.

“One record after another. I didn’t know he could break his record tonight but I’m pretty sure he is proud of that, he should be,” he said.

“If it was only the incredible number of his goals it would not be enough to be successful, so thank God others scored a lot of goals as well and made this team successful.

“But Mo is a very exceptional player. Nobody doubted it but if you need numbers to prove, he delivers that as well.”

Klopp was less effusive about the way VAR operated during the game, echoing growing criticism about how the length of time is killing the spontaneity of football.

“It just took too long. I think in the end, I didn’t see it back, the decisions were right but it was so difficult it took three or four minutes and it was cold for the boys,” he added.

“It is really hard and I could hear people saying ‘oh my God’. It took really long and it was really cold, which doesn’t help.

“I used to be one of the people who said VAR is a good idea, I’m really not sure if I would say that again to be honest. But now we have it.”

Apart from the technical difficulties and a knee injury to Kostas Tsimikas, it was a night full of positives.

Teenagers Leighton Clarkson and Billy Koumetio, playing his first senior game, made their Champions League debuts, the latter becoming the club’s youngest player in the competition after coming on at half-time as Liverpool fielded their youngest team.

“[Koumetio] will learn and especially we let them have the experience without making this one game too big,” said Klopp.

“It is a wonderful thing to have your first Champions League game but your career is about how many you have.

“Both boys are already really skilled but they have a lot to learn and we will give them the time to do so.

“They helped us a lot because we could rest other players, which is very important.

“I am pretty sure it was a big night for both of them, I am really thankful they are as good as they are, that is the reason why we can use them, but I know there is more to come.”

Midtjylland coach Brian Priske felt his side missed the chance to pull off a famous victory.

“Of course I’m happy with the one point, but I’m also a bit disappointed that we didn’t get all three,” he said.

“Looking at the second half, I think we dominated the game and created a lot of chances. So we had good opportunities to pick up three points at home against a very strong side.”