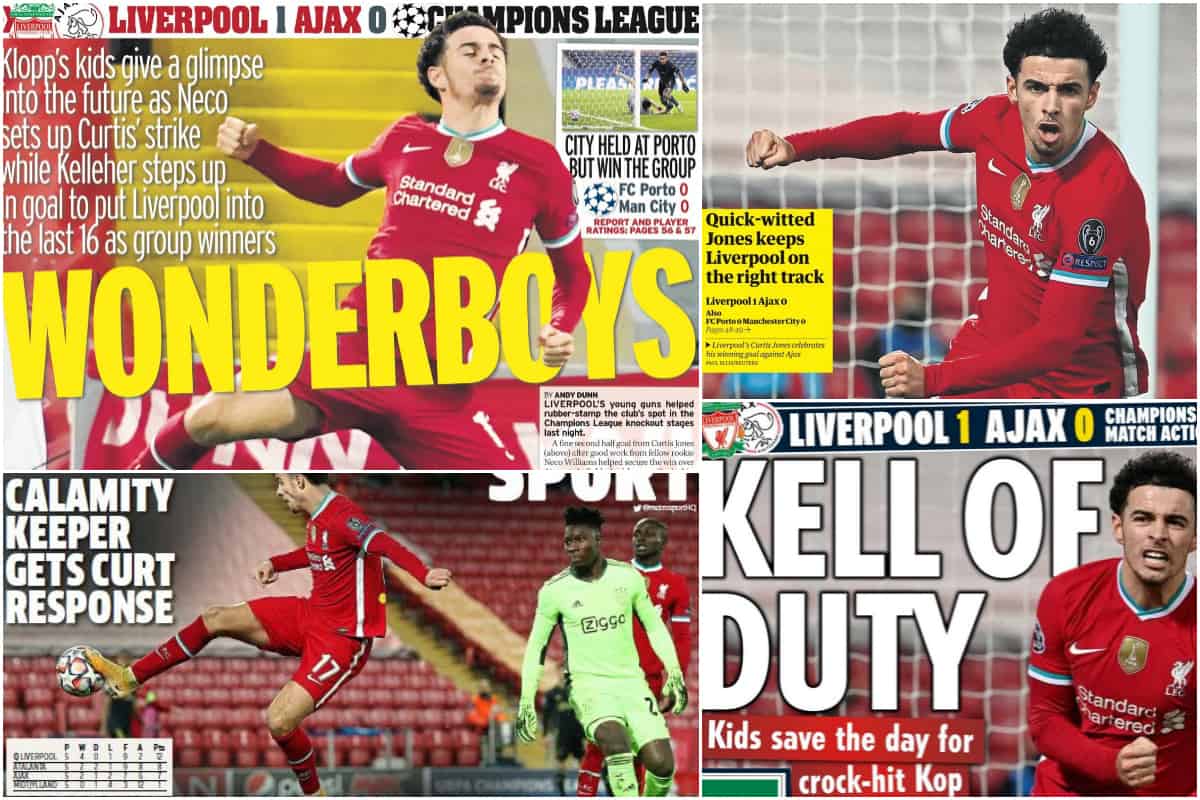 The media lauded the displays of the three youngsters in Liverpool’s 1-0 win over Ajax and praised the Reds for yet again finding a way to get the job done.

The Reds confirmed a place in the last 16 of the Champions League and as group winners with a battling win at Anfield.

A goal made in the academy took Liverpool through, as Curtis Jones met Neco Williams‘ cross, while Caoimhin Kelleher played his part with some fine saves to keep a clean sheet.

Job done for Liverpool, who now have a valuable dead-rubber fixture against Midtjylland which Jurgen Klopp will be most grateful for in this intense, relentless schedule.

The Mirror‘s Mark Jones, among others, assessed it was exactly the night Klopp will have wanted as his team earned some priceless breathing space in securing early qualification:

“And so Klopp has that most rare of commodities this season: breathing space.

“With the Premier League title race looking like a tight one and Christmas around the corner, it will be a rest he gratefully accepts.”

The Liverpool Echo‘s Paul Gorst praised Klopp’s squad for getting through the group stage with such little fuss:

“Group D has been safely negotiated with little, if not quite minimum, fuss.

“Save for one of the poorest European displays in many a season last week against Atalanta, it’s been plain sailing for Klopp’s side.”

The Telegraph‘s Chris Bascombe applauded Liverpool for continuing to do what’s needed to get through a period in which it has seemed everything has gone against them:

“That was the reward for another resilient rather than majestic Liverpool performance. We expect so much, even with half a team in the hospital wing of their new training facility, but more often than not they keep finding a way.

“The more it seems only injuries can stop them, the more they suggest such setbacks are a hindrance to consistent dazzling football rather than enduring promising results.”

Neil Jones, writing for Goal, reflected on a proud night for the academy as the three youngsters stepped up and delivered on the biggest stage:

“This was a wonderful night for Liverpool’s Academy, with three graduates shining under the Anfield spotlight.

“That’s what the manager needs right now; everyone delivering, from the stars to the subs to the kids.”

The Mirror‘s David Maddock praised Klopp for being brave enough to give the youngsters a chance on such a key night, and the trio for repaying that faith:

“On a night that will make bold Jurgen Klopp proud, he was joined in the Champions League spotlight by two more emerging young stars, as the Reds manager’s huge gamble paid off.

“Klopp was repaid for not only giving Jones another important Champions League role, but also making the bold step of choosing to give 22 year-old Irish keeper Caoimhin Kelleher his first European start in the absence of injured Alisson, instead of going with the safer, more experienced option of usual reserve, Adrian.”

On a proud night for the academy, all three youngsters were praised for their starring roles…

“Curtis Jones, Scouse to his core, was the match-winner, capping a superb performance with his first European goal in front of the Kop.

“At 19, the young midfielder’s potential looks limitless. He belongs at this level, that’s for sure.”

Mark Jones was not only impressed by Jones’ performance, but also the way in which the upcoming midfielder has “blossomed into a real first-team player”:

“The youngster’s progress has been a refreshing constant during these fluctuating times, and it was he who took the game to Ajax from the off as Liverpool pressed for an early goal.

“He was so unlucky not to get it when his effort from distance struck a post, and the teenager again demonstrated that 2020 has seen him blossom into real first-team player for the Reds, something that his goal – at a crucial time – made clear.”

Maddock thinks it’s now time for Jones to be handed more starts as he looks “completely at home” on the biggest stages:

“But in the midst of a crippling injury crisis he has taken responsibility and command of a place in midfield – and this time grabbed the chance to surely secure a more regular starting place now, with such an impressive display for a teenager.

“In a team still rammed with stars, he looked completely at home alongside Mo Salah, Sadio Mane and Diogo Jota, and caused the Dutch visitors a massive headache all evening.”

The Independent‘s Alex Pattle was taken aback by Jones’ supreme confidence and explained how the match-winner has the perfect attitude to succeed under Klopp:

“The 19-year-old’s confidence throughout was promising – not that he’s lacked any in his previous outings for the Reds, but he had the bit between his teeth to make a difference here, not shying away from criticising his more senior team-mates when he felt it was deserved.

“In a game that Liverpool didn’t need to win, the midfielder saw victory as a necessity. That is the sort of attitude that Jurgen Klopp wants from his players. It is an attitude that wins trophies.”

Meanwhile, the Press Association’s Carl Markham reflected on a faultless performance from Kelleher in which the ‘keeper “did not put a foot wrong”:

“The focus had been all been on Caoimhin Kelleher making his competition debut between the posts for Jurgen Klopp’s side because of injury to Alisson Becker but the 22-year-old did not put a foot wrong.”

The Independent‘s Melissa Reddy was particularly impressed with the composure and maturity of the Irishman’s display:

“Bar the big, decisive saves, Kelleher’s composure was pleasing to watch. Against a slick, aggressive side as part of a makeshift defence, he was never flustered.”

The Mail‘s Ian Ladyman analysed Kelleher’s match-saving stop from Klaas-Jan Huntelaar and explained why it was such an outstanding piece of goalkeeping:

“It looked all over a goal from point-blank range until Kelleher got both hands to the ball and diverted it up and around the post. The second part of that sentence was actually the impressive bit.

“To make the save was one thing but to get the ball away from attackers sniffing the follow-up was probably the most important part of all.”

Neil Jones is in no doubt that Kelleher should keep his place against Wolves and should now be regarded fully as Liverpool’s No. 2:

“He will surely start against Wolves now. Certainly, he looked more assured here than Adrian has when called upon this season.

“Comfortable with the ball at his feet, loud and decisive, this was the night the No.3 goalkeeper wearing the No.62 jersey has become the No. 2. No wonder Klopp headed straight for him at the final whistle.”

Elsewhere, the Liverpool Echo‘s Ian Doyle singled out Williams, commending the right-back’s mental strength to bounce back with such an assured display:

“Neco Williams thoroughly deserved the bearhug he received from Klopp after responding to a difficult week with an increasingly impressive display at right-back.

“The Welshman is clearly made of tough stuff.”

Liverpool’s defensive performance was “superb,” in the view of ESPN’s Tom Fenton:

“Defensively, Liverpool were superb. Up against a prolific Ajax attack, the home side remain poised and organised, even as the shots rained down in the closing stages.”

On a similar train of thought, Mark Jones felt it was a night that reminded of the quality of Joel Matip and also the importance of keeping him fit:

“There were widespread concerns when Klopp had to leave Joel Matip out of the weekend trip to Brighton, but his importance to the Reds has long become clear for all to see.

“It was Matip, remember, who was arguably Liverpool’s best central defender in the knockout stages of the run to 2019 Champions League glory, and while his ability to turn in these type of performances has never really been questioned, the fitness required to deliver them has. He simply has to stay fit for Liverpool, but right now he is and he is delivering.”

Fenton highlighted one area for improvement, that being Liverpool’s wastefulness in attack:

“As much as we may associate the Premier League champions with goals, they’ve struggled to put the ball in the back of the net in their past three outings. Wasteful finishing was on display once again tonight, as it took a mistake from the Ajax keeper for Liverpool to be able to take the lead.

Elsewhere, Gorst reserved some praise for Klopp, highlighting how brilliantly the German has done to turn the Reds into a side that regularly reaches the latter stages:

“What a transformation it’s been in Europe for the Reds under the current manager. Five years ago, qualification for the competition itself would have been cause for celebration and it looked someway off.

“Now, they contest the last 16 as a matter of routine and have serious designs on becoming champions of Europe every time. With three Champions League final appearances on his CV, including winning it in 2019, Klopp’s tactical acumen at this elite level sometimes goes curiously unspoken outside the confines of the red bubble.”