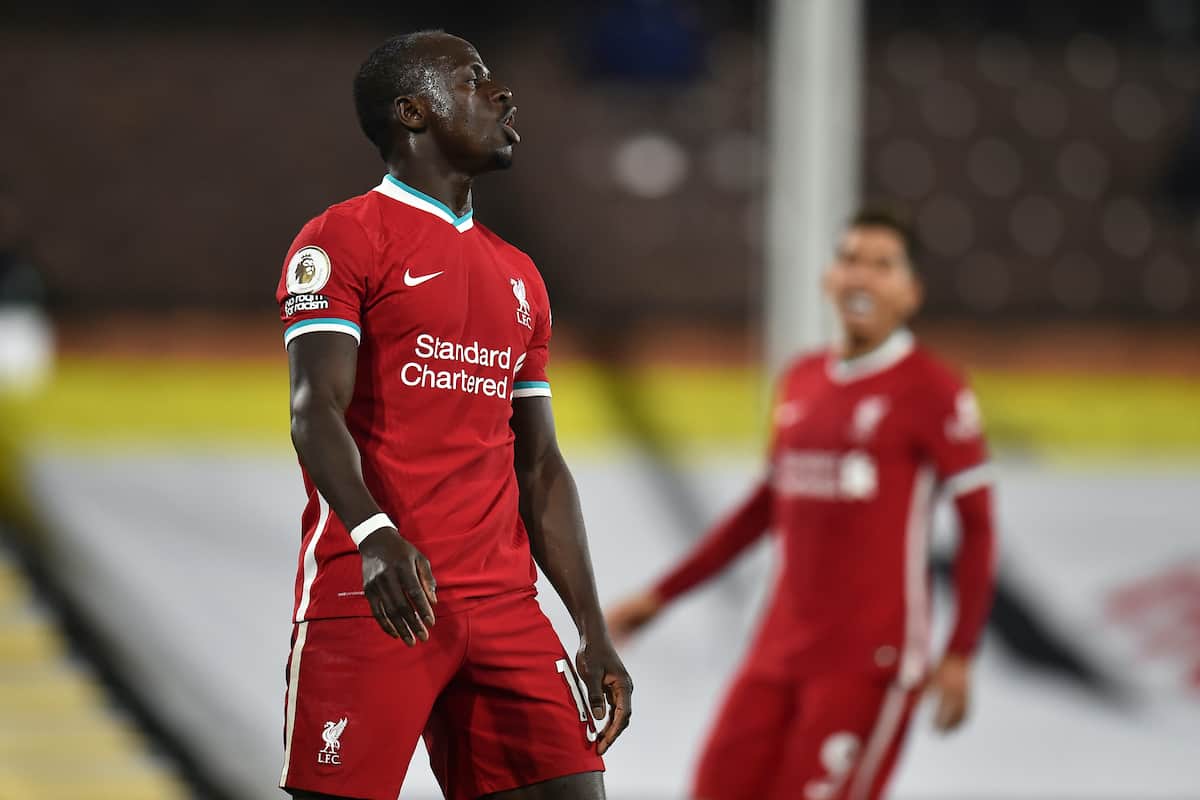 Mohamaed Salah salvaged a point for Liverpool on a disappointing evening as they drew 1-1 at Fulham, and fans had a lot to say.

While the Reds continue to battle with injury, the trip to Fulham presented a chance to sit two points clear at the top of the table with a victory but they couldn’t muster the performance to do so.

What awaited was a lethargic and first-half devoid of any quality as the hosts put on a show for their fans and after a barrage of chances finally made one count through Bobby Decordova-Reid.

The end of the first half saw Liverpool settle but they had Alisson to thank that they were still in the contest, a sentiment which rang true at the start of the second before Mo Salah hit only the second shot on target.

And as the Reds started to gain ascendancy they finally made it count on the scoreboard as the Egyptian converted from the penalty spot after a handball infringement.

Definitely not a great match but a point sets up a gargantuan clash between level on points league leaders Tottenham and Liverpool. Who after 12 games are both on pace for a 79 point season. Alright, then.

Lucky to come away with anything, let’s be honest. Woeful. Another draw.

We’ve stolen a point there. The application first half was disgusting, frankly. Fulham should have been been 3-4 to the good at the break. Awful display with the inevitable Matip injury to boot.

“Lacklustre performance, and we never really came up to speed even after halftime. Fair play to Fulham.”

“Opportunity missed. Wrong attitude from the off. Away form is a cause for concern.”

Missed opportunity for the Reds. It's a going to be a tough and very long season. Keep going lads, stay in touch over Christmas and we'll see how second half of season goes

What a weekend to pull a performance like that out of the bag.

It wouldn’t be a league weekend without a VAR debate…

Right decision by Mariner. Crazy it took so long.

What is Lee Mason doing on VAR there???? Ridiculous delay. Didn't need 700 replays or call the ref over to establish that Fabinho played the ball.

If you can't spot a clear issue with a decision within 30 seconds, then the game has to continue as is.

It wasn’t a foul, but stunned Marriner didn’t give the penalty there after such a long VAR review. Just kills the viewing experience. Always telling when the opposition players don’t even appeal.

It’s a great tackle. He gets the ball. If you have to watch 50 times to find something then there’s nothing to find. It’s *not* clear and obvious. Absolutely shite.

Matip’s injury proved yet another punch to the gut…

Looking forward to Klopp saying Matip has got a "slight knock" post-match and then him disappearing off the face of the Earth until April.

Another injury to a defender then?

#lfc's starting back line, next match:

But Jones and Alisson were two bright notes…

Jones mentality impresses me. Garbage first half then our best player second half. Not many players can switch it like that, especially at 19 years of age. #LFC

“Jones is a fucking stud. He’s taken responsibility for our attacking play second half, he deserves to be on the winning side.”

“Jones and Alisson the only ones with some credit.”

Curtis Jones comfortably Liverpool’s best outfield player. Got himself on the ball, didn’t hide, and forced the issue in the final third. One of few positives, alongside Alisson.

Curtis Jones the one real bright spot. That one run reminded me of the Gerrard goal against Sheff Wed. Tried to add a bit of flair to a midfield that didn’t look like unlocking Fulham

Alisson our Man of the Match for all the saves and quick decisions first half. Special mention to Jones who 2nd half did a lot and tried to make things happen, including winning freekick that led to penalty.