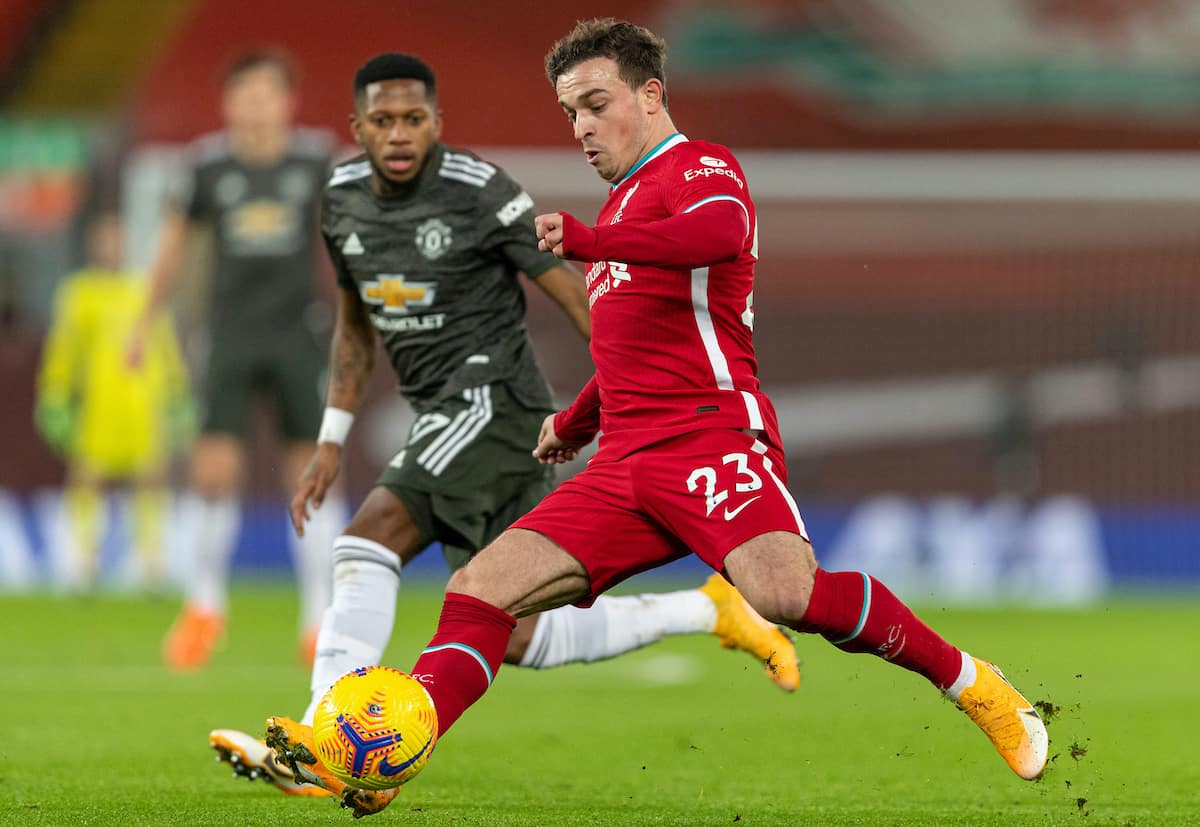 The expectations were high as Liverpool and Man United faced off in a top-of-the-table clash, but a lack of quality was on show at Anfield as a 0-0 draw played out.

Sunday brought a modern-day rarity as Liverpool and United faced off as the Premier League‘s top two sides, with their respective ebbs over the years ensuring there was not often this much on the line.

Jurgen Klopp was deprived of Joel Matip in the buildup, with the Cameroonian not fit enough to feature, but the occasion brought an opportunity for Xherdan Shaqiri, who looked to stamp his authority on proceedings early on with a series of incisive passes.

Another outlet came with the deployment of Jordan Henderson as left-sided centre-back, with the captain looking to spring attacks with long-range passes out to the flanks, which has become a staple with Virgil van Dijk in the side.

The Reds were dominant throughout the majority of the first half but, unfortunately, the best of the chances fell to an off-colour Roberto Firmino, who found himself shanking efforts wide or into the clutches of David de Gea.

United did begin to find openings but more often than not they came with players in offside positions, with the half ending with the visitors having been flagged seven times, whereas Liverpool barely had space to run into.

It was clear at half-time that both Firmino and Andy Robertson would need to improve after the break, and the pair combined for a big chance on the hour mark, with only Harry Maguire’s interception keeping Liverpool’s No. 9 from converting a brilliant cross.

On came Edinson Cavani soon after, with United sensing an opportunity despite the Reds continuing to dominate possession, as the game threatened to open up as an end-to-end battle.

Rather than open up, it perhaps became more scrappy, though both sides had half-chances to break the deadlock, with both Firmino and Mohamed Salah toiling but often finding themselves overrun or lacking the touch or fleet-of-foot required.

The Shaqiri experiment ended in the 76th minute, as Curtis Jones was brought on for his first clash with United at senior level, before Thiago drew a bright save from De Gea in his first Anfield outing as a Liverpool player.

Both sides pushed for a winner late on, but ultimately it did not come, with United staying top as the Reds fall behind – four league games without a win, three in a row without scoring.