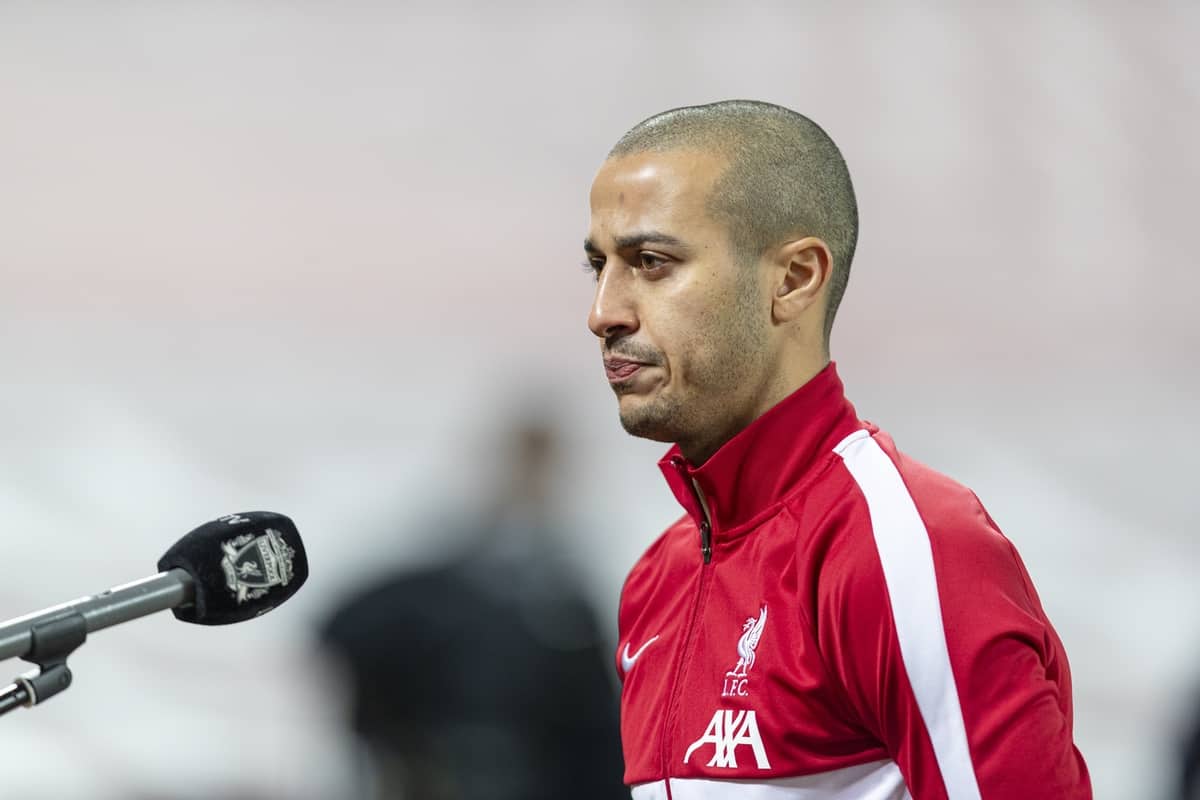 Liverpool midfielder Thiago Alcantara admits not converting their chances affects the players’ self-confidence and improvements have to be made.

Jurgen Klopp’s side had 66 percent possession and 17 shots against arch-rivals and Premier League leaders Manchester United but managed just three on target in a goalless draw which saw them drop to fourth in the table.

The defending champions are on a three-match goalscoring drought in the league, which is their worst since March 2005.

And Thiago, making his first Anfield appearance four months after arriving from Bayern Munich due to injury and illness, said you could see it had an effect against United.

“When we didn’t realise [the chances] and didn’t make the goals, we’re just getting our self-confidence a bit down and that’s why the game changed,” he told LiverpoolFC.com.

“At the end, it’s football and in some minutes of the game you are in high emotions and sometimes you are low – it’s part of the game.

“Without winning, we are never satisfied. We made a superb first half, then the second half was 50-50.

“We are happy in some way with our performance – how we did in some moments of the game – but we have to do much better to be on top of the league.” 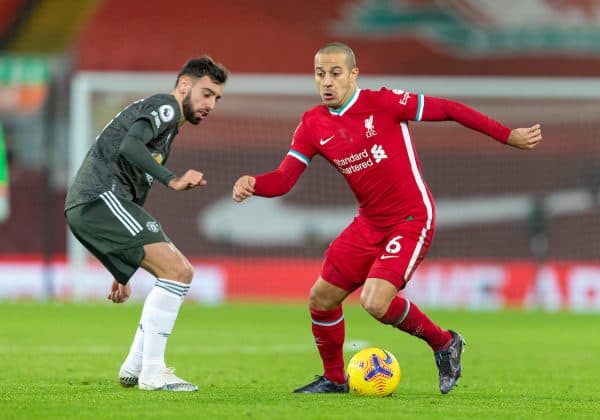 Liverpool still have the Premier League’s leading scorer in Mohamed Salah (13) but Sadio Mane has only six and Roberto Firmino and Diogo Jota, who is currently injured, both have five.

No one else in the squad has more than one league goal.

Last season, when Klopp’s side ran way with the league, while his three main forwards were doing the heavy lifting, six other players scored four or more goals.

Thiago said it was the responsibility of everyone to chip in when things were tough.

“Look at the guys we have in front – not just the big three, let’s say that. We have Div, we have Shaq, we have Taki,” he added.

“It’s a matter of creating the chances that we are creating to be effective.”

Captain Jordan Henderson, who played his second successive match in an all-midfield central defensive partnership with Fabinho, agreed with the Spain international.

“We need to score goals to win games – and I’m not talking just about the front three, by the way,” he said.

“I’m talking about everyone: midfielders, full-backs getting into the box, set-pieces. Everybody can chip in. We need to start doing that quickly.

“I think we gave everything to try to win the game but unfortunately just couldn’t find that goal, which we find ourselves keeping saying that over the last few weeks. That needs to change quickly.

“We’re all human. You can see when we miss chances we’re a little bit down confidence-wise but then we need to keep going to try to find that goal.

“We’ve just got to keep working hard and not think about it too much, because the quality we possess going forward is frightening.

“So it’s not quality, we just need to change our mentality a little bit and make sure we’re ruthless when we come in front of goal.

“That’s everybody that gets into the box and gets the opportunity to score.”

On Thursday, Burnley, a team who have conceded five goals in their last eight league matches with no victory or defeat by more than a one-goal margin, arrive at Anfield.

Klopp, however, is confident the goals will return.

“We will create chances and we will score but I know now we face Burnley on Thursday and they are not famous for conceding an awful lot of goals,” he said.

“It is not that we just decide from now on we want to score again and now we will do it, but I see the boys really in the situation and I will help as much as I can so that we change it as quickly as possible.”