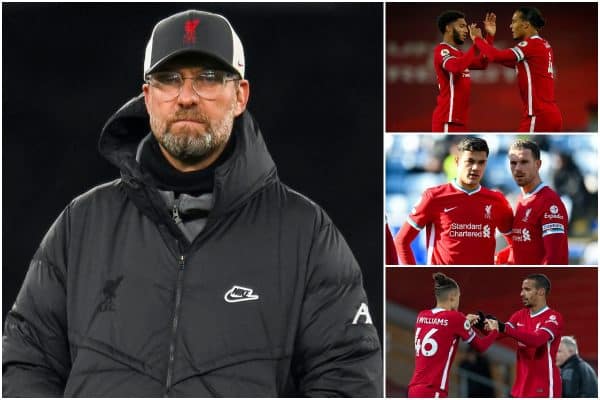 Rotten luck with injuries has seen Liverpool already call upon 18 different centre-back partnerships in the space of just six months, and there could be more on the horizon.

No one could have predicted that by February, the Reds would have lost the three senior centre-backs they started the campaign with to season-ending injuries.

Not to mention then having their two midfield emergency covers also succumb to injury at various stages of the campaign to leave the defence in a state of constant upheaval.

The knock-on effect has been one of sizeable proportions and there is room for more combinations at the heart of the defence turning into the final three months of 2020/21.

It’s an unbelievable state of affairs and we have looked to display how astonishing the set of circumstances facing Jurgen Klopp by looking at the 18 combinations and the minutes played together.

The first partnership of the season lasted just three games, with Gomez’s withdrawal due to injury at Villa Park in October ensuring it would be the last.

This one was also short-lived, but their outing at Stamford Bridge had provided a comfort blanket for what many hoped wouldn’t be a regular sight. Few could expect what would soon unfold.

A partnership used solely in the League Cup campaign and no doubt an experience to savour for Rhys Williams.

Believe it or not, this is the second most used combination this season. The pair have partnered up across the League Cup, Premier League and Champions League to date.

A partnership limited to cup action prior to Gomez’s season-ending knee injury, where no goal was scored against the Reds in open play during that time.

This one never had time to take flight after Van Dijk’s ACL injury during the Merseyside derby.

The next great hope would then last only two games as the pair picked up respective injuries.

Despite their last game together coming at the end of October, they are the joint-sixth most used pairing by Klopp based on minutes. Insane.

It was a case of another game and another partner for Gomez with Nat Phillips, but they would feature just once together in the win over West Ham at Anfield.

The most-used combination, at the time of writing, comes in the form of Fabinho and Matip, who only played a total of seven of Liverpool’s 37 games together.

This duo perfectly showcases the upheaval the Reds have been forced to deal with.

A one-time-only gig for these two in what has been a common occurrence this season as the situation from game-to-game has changed drastically.

The back-end of 2020 introduced the 12th different pairing, both games would end in a draw.

A combination straight out of the academy and one few would ever have predicted to start together, let alone in the Champions League.

The time then came for the two midfield emergency options to take over, swiftly becoming the third-most used pair at a cost to Liverpool’s performance further up the field.

An entire 45 minutes was all she wrote for the captain and Matip, with the latter forced from the field with what would be a season-ending ankle injury at Spurs.

This pair would then be thrown into the deep end, but they formed part of the back-line which returned the only two league victories in 2021 to date.

The arrival of Ozan Kabak provided another option and in the space of just seven days, this duo would become the joint-sixth most used combo before the captain’s injury against Everton.

And Phillips’ introduction at the half-hour mark in the derby heralded in the 18th combination to date.

With three long months still left in the campaign, there are still combinations that have yet to be called upon by the boss.

And it would be no surprise to see the final tally sit well beyond 20 centre-back pairings by season’s end, here are just a few which could be used:

You truly couldn’t write the season Liverpool are having.