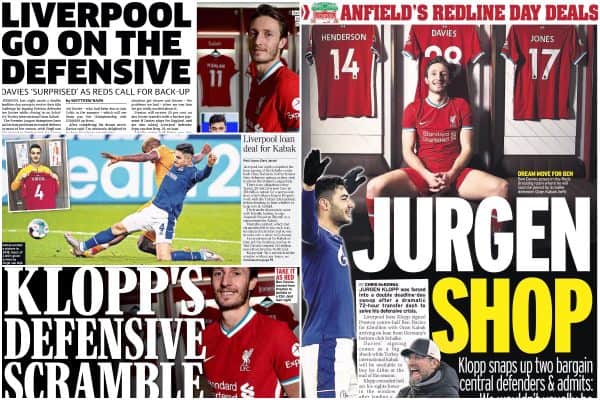 It was a busy day for Liverpool as the January window came to a close, securing two centre-backs to fill the growing hole while Takumi Minamino also made moves down south.

After months of seeking in-house solutions to the ever-growing injury issues at centre-back, the Reds landed two options to bolster their ranks at the last possible opportunity.

While the timing of the deals should have come earlier for some, the duo’s arrival represents the ability to have greater flexibility in a position which has seen the three senior centre-backs the club started the season with all succumb to long-term and season-ending injuries.

And the busy day concluded with Takumi Minamino joining Southampton on loan in a shock late switch.

Such moves ensured Liverpool were one of the main talking points as the winter window closed, and here is how members of the media reported on the Reds’ activity.

Despite acting late, there was praise for Michael Edwards for sealing two deals without forking out extortionate funds…

For the Telegraph‘s Chris Bascombe, the two centre-back deals showcased how much of an “imaginative negotiator” Edwards can be during an unprecedented financial landscape:

Not for the first time, sporting director Michael Edwards has proved an imaginative negotiator, signing two centre-backs on terms which by the standards of today’s market are cheap.

Similarly, Darren Wells for the Mirror, labelled the move for 20-year-old Kabak a “masterstroke” after agreeing to no future obligations:

Liverpool’s sporting director Michael Edwards looks to have pulled off another transfer masterstroke after the club reached a deal for Ozan Kabak.

The Independent‘s Melissa Reddy felt Liverpool’s transfer guru deserved more “than credit from a KFC Twitter account” after sticking to their principles:

The champions secured two players with high ceilings, aged 20 and 25, without financially hampering themselves or hindering their long-term planning for the position.

There can be appreciation for Edwards delivering quite a sensible solution under trying circumstances mixed with discontent that the Merseysiders didn’t act sooner, leaving them to scratch around as time ticked away.

But that they still managed to stick to the principles that made them successful at such a trying time deserves more than credit from a KFC Twitter account.

And Goal‘s Neil Jones echoed that sentiment as he weighed up both the delay in signings and the extraordinary work conducted behind the scenes:

As for Liverpool, they’ll feel that, despite everything, they have moved smartly in the market once more. Even KFC were tweeting about the genius of Michael Edwards, the Reds’ sporting director, on Monday. He knows how to work a deal, that much is clear.

A combined effort at the Athletic, revealed how the intention had been to avoid short-term solutions and wait until the summer before the green light from up was received:

Liverpool had initially intended to avoid going down the road of short-term fixes and hoped to wait until the summer before dipping into the market. However, their position changed dramatically last week when owners Fenway Sports Group gave the green light for signings to be made.

Liverpool’s activity was coined as “plate-spinning” once it became known that the centre-back situation could not be easily covered without new faces despite the two recent wins, as per Bascombe:

The twin deals have ended a few days of what the champions described as ‘plate spinning’ to identify recruits to fill the void.

The team’s timely return to form in impressive victories over West Ham and Spurs could not camouflage the dicey situation at the back.

With Joel Matip‘s season-ending injury in mind, it was clear why the Reds had to act for Jones, as he listed the alternative option to Kabak that was on the cards:

The Reds had been insistent that it would be a quiet window, but they were forced to alter their stance as the club’s injury crisis at centre-back worsened significantly during January.

The news explains why Liverpool have dipped into the transfer market, signing two new centre-backs on deadline day.

Liverpool considered a number of options once it became clear that they would have to dip into the market. They were offered the chance to sign Croatian international Duje Caleta-Car from Marseille, but that deal was dependant on the French club sourcing a replacement.

The Times‘ Paul Joyce, meanwhile, offered a look at the numbers behind the deal for Kabak and how the Reds had been prepared to walk away if their terms were not agreed to:

Liverpool will pay an initial £1 million loan fee to the Bundesliga’s bottom club, with a further payment of £500,000 dependent on Kobak’s appearances and Champions League qualification.

It is understood Liverpool would have walked away from the deal if they had been obliged to buy Kabak at the end of his loan and have instead negotiated a deal that does not expose them to long-term financial risk.

Reddy offered up another two names who were “considered” for the role while emphasising the thought process at different stages as the injury situation worsened:

There was a sense that the character of the team – a fundamental of them becoming champions of Europe and England – could absorb the absences and carry on.

But that was asking too much of them and the system to function at an elite level without key armoury while fatigue and a lack of recovery time ruled supreme.

The club had to always take availability, affordability and skillset into the equation, while balancing out whether quick fixes would stifle any of their longer-term thinking.

They rebuffed a £20m proposal for the left-sided, right-footed player, while Braga’s David Carmo and Bayer Leverkusen’s Edmond Tapsoba were also considered.

And the Liverpool Echo‘s Paul Gorst spoke of the “low risk” move for Davies which could to “major gains” whether he carves out a long-term future at Anfield or not:

It is a low risk move that has the potential for major gains for the Reds, both on and off the field…If it doesn’t work out then Liverpool will make their money back and then some.

At the Atheltic, they touched on his prowess last season and how his aerial ability has “come on leaps and bounds” – a key trait required for Liverpool:

Last season he excelled at being a “do a bit of everything” defender. He scored three goals from set pieces in 2019-20 too, a useful skill for Liverpool to leverage.

He’s come on leaps and bounds in the air in open play though, near Van Dijk and Matip levels.

For Joyce the switch for Kabak, which has no long-term commitment for the Reds, is one which ensures he must “seize the opportunity”:

This arrangement means the onus is on Kabak, who was suspended for five matches earlier in the season after spitting at an opponent, Werder Bremen’s Ludwig Augustinsson, to seize the opportunity to prove the glowing references from two of Klopp’s closest friends in football are correct.

Expectations were tempered by Reddy as to Kabak and Davies’ ability to solve all the issues instantly, but, importantly, as a pair they offer the skillset required:

Liverpool have ultimately got two interesting players – one very aerially dominant in Kabak and the other highly comfortable in possession, with recovery pace – who have the desire to improve and have come in cheaply.

It would be unfair to expect either of the two signings to immediately offer the kind of surety they did. For the pair to cure all ills or morph into the finished article with limited training time.

There was also a word on how their arrival eases the pressure off Rhys Williams and Nat Phillips, from Gorst, after being unexpectedly thrown into the spotlight:

The pressure is taken of the likes of Rhys Williams and Nathaniel Phillips, both of who could benefit from regular football away from the spotlight and the burden of having to deliver to keep the Reds on track to retain their Premier League crown.

Those from the Atheltic continued on by stating that while they are not “booming statements of ambition” they are “low-risk” moves which have the potential for high reward:

Kabak and Davies aren’t big-money moves, they aren’t booming statements of ambition. But in difficult circumstances, Liverpool have landed two centre-backs for an initial outlay of just £1.5 million combined.

They are both low-risk options. Liverpool’s season rests to a large degree on them being high reward.

And, finally, James Pearce touched on the notable departure in Minamino and how his Southampton loan could prove beneficial in the long run.

Klopp believes he will benefit from playing regular first-team football. Saints are seen as a good fit given Ralph Hasenhuttl’s style of football.