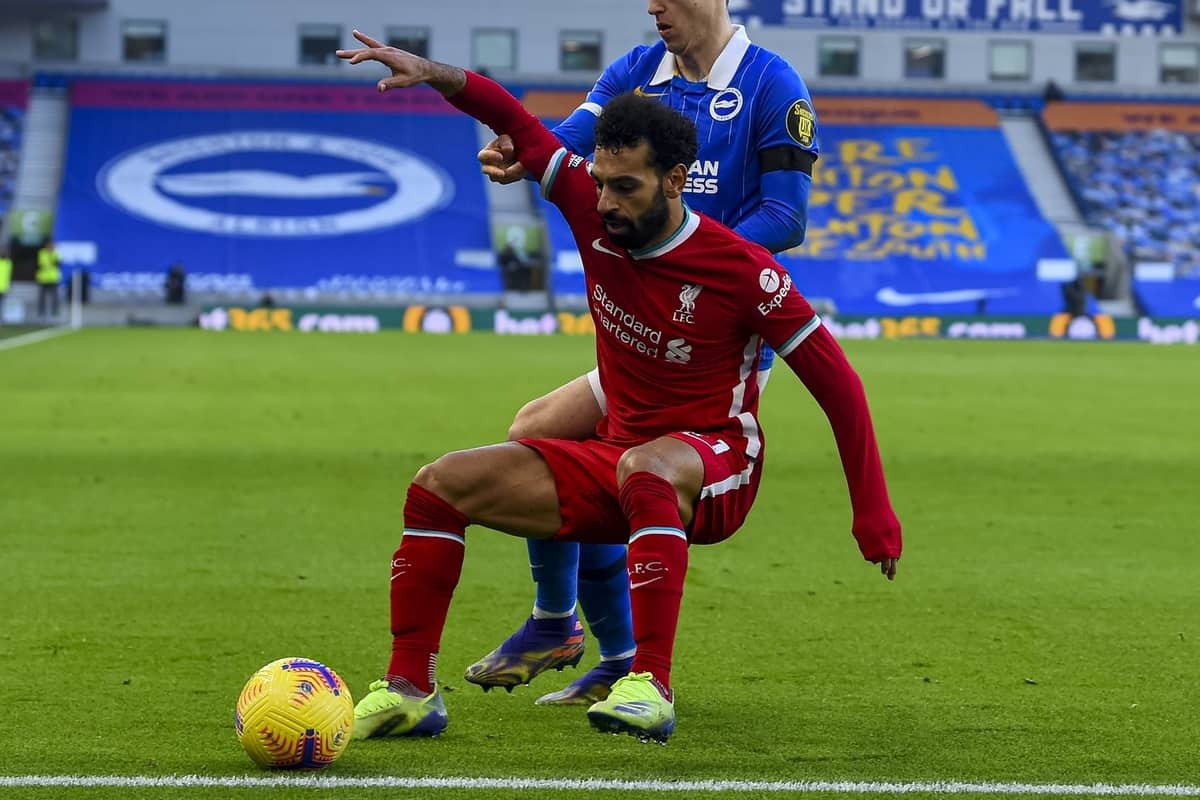 Liverpool are fully expected to see off Brighton at Anfield on Wednesday night, but the Seagulls will be eyeing up a Burnley-esque shock.

The Reds were back to their brilliant best at the weekend, with a weakened team cruising to a 3-1 win away to in-form West Ham.

The Premier League champions have clicked again after a dire run of form and a midweek victory against Brighton would be another step in the right direction.

Graham Potter’s side are hovering above the relegation zone, but their 1-0 win at home to Tottenham on Sunday shows how dangerous they can be.

Ahead of the game, we spoke to Kieran Maguire (@KieranMaguire), lecturer in football finance at the University of Liverpool, to hear about Brighton‘s season to date, Liverpool’s title hopes and Wednesday’s match.

Brighton are 17th in the Premier League – how content are you with the season so far? 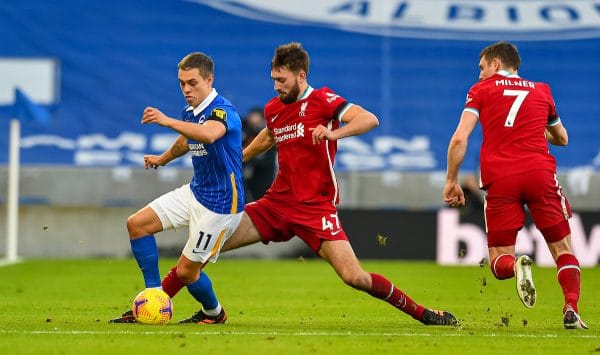 Performances have been better than results.

Brighton have won plenty of plaudits from the media and other managers, with Pep Guardiola saying that he would have loved to play in a team that plays football the way that we do.

Seventeenth place is, however, a squeaky bum position to be in the table.

Luck has not been our friend for most of the season, with Man United scoring a winner after the final whistle had blown in the 100th minute of a match where there were supposedly seven minutes of injury time.

But you have to take the rough with the smooth.

Is there pressure growing on Graham Potter now?

A section of the fanbase has turned against Graham Potter, screaming that results are all that matter.

These are in the main the same people who were calling for the head of Chris Hughton two years ago, when his more pragmatic style of football had us in a higher position in the Premier League than at present, when apparently it was entertainment that mattered rather than results.

These critics, many of whom have formed their expertise from playing on a Sunday morning and successfully guiding Brighton to four Champions League trophies on Football Manager, are also opposed to players taking the knee and staunch defenders of #AllLivesMatter and Donald Trump.

Are you backing the Seagulls to beat the drop? 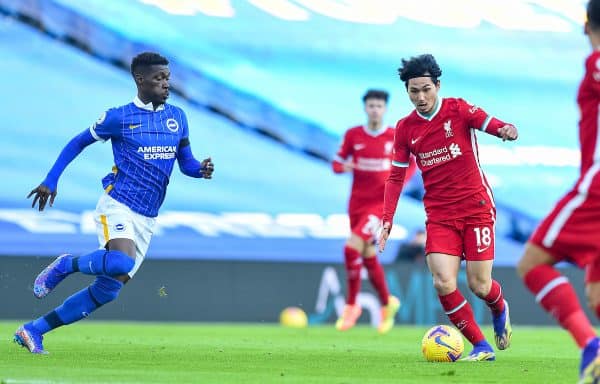 If results match performances then we should be fine.

Seven points from the last three games has certainly helped and we are within a couple more good results of moving a few places up the table.

Given the frequency at which teams are playing at the moment, however, things can easily take a turn for the worse, too.

We haven’t lost so far this season to any team in the bottom nine, but turning draws into wins has been the biggest challenge.

If we continue to earn a point a game for rest of the season, then that should suffice.

Who have been Brighton’s three best players this season? 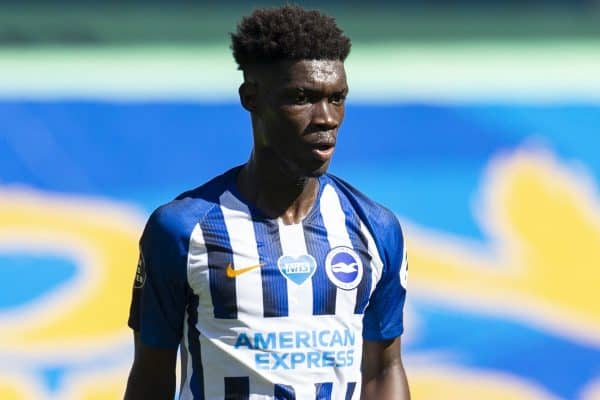 Yves Bissouma: third season at the club, the first in which he has been consistent. Very much in the N’Golo Kante and Claude Makelele mould.

He is a powerful player, breaks up play, a superb tackler and a scorer of spectacular, if infrequent, goals. Has been linked with bigger clubs who need a midfield enforcer.

Alexis Mac Allister: has only broken into the team in the last couple of months, after moving from Argentina, and initially took time to adjust to the speed and intensity of the league.

Now looking like a genuine No. 10, his through-the-eye-of-a-needle ball to Pascal Gross set up the winner against Tottenham and he did similar in a win at Leeds a couple of weeks ago, too.

Adam Webster: record signing at £20 million from Bristol City 18 months ago, which is a lot for a Championship centre-back.

He took time to win over the fans in replacing favourite Shane Duffy, but this season he has improved in terms of reading the game and confidence.

Webster is part of a solid defensive unit alongside captain Lewis Dunk and Ben White, who is also improving every match and will not be with us long, as admirers are circling.

A £25 million bid from Leeds was rejected back in the summer, mainly because he will be worth two or three times that amount within a few months.

Switching our attention to Liverpool, how do you assess them in 2020/21 to date? 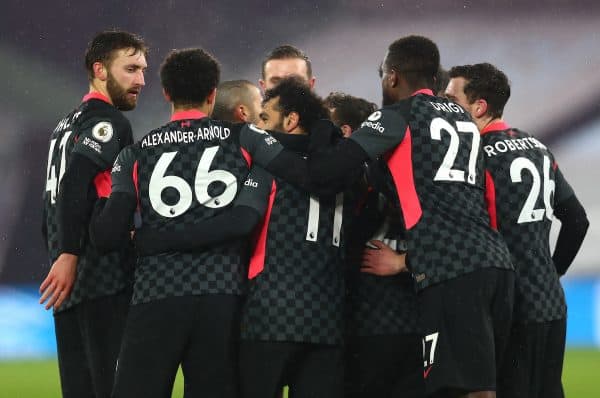 Man City losing Aymeric Laporte to injury in 2019/20 hit the club hard and the Virgil van Dijk assault by Jordan Pickford has had a similar impact.

Diogo Jota being unavailable has not helped recently, as sometimes the starting XI needs a refresh, with competition for places also healthy.

There’s not much wrong with Liverpool, though – all teams go through lean patches and it looks as if Liverpool’s has now ended.

The title is very much up for grabs, although clearly not a two-horse race as we have seen recently.

Do you fancy them to retain the Premier League title? 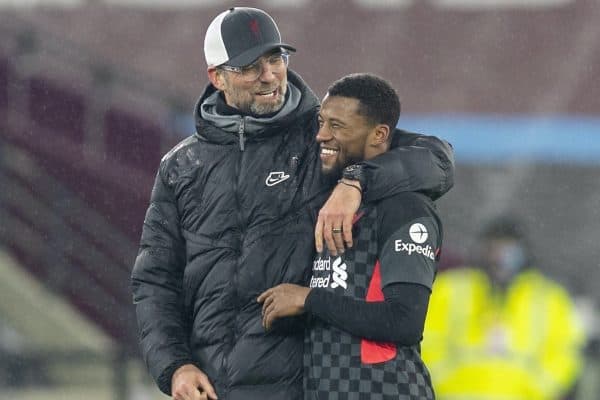 They are not favourites, but stringing together half-a-dozen victories, especially with City being without Kevin De Bruyne, could make it into a very tight title fight.

Spurs are definitely out of contention, Man United have excellent players but look unbalanced with no tactical guile and Chelsea went for fancy rather than practical signings last summer.

I suspect it will go to the wire with City and Liverpool.

Looking ahead to Wednesday’s game, who do you fear most?

Mo Salah. He’s got his mojo back and the second goal against West Ham was scarily good in terms of ball control.

He has a very good record against us, too.

We are likely to play with a mid-press at Anfield, with a back three and two wing-backs. Bissouma will be screening the defence and we look to break on the counter-attack.

A lot will depend on how well we deal with overloads and Liverpool are superb at switching play from flank to flank.

Preventing Trent Alexander-Arnold and Andy Robertson from getting cutbacks will, therefore, be critical.

Defending set-pieces has been our Achilles’ heel, although a lot of work has gone into this issue, with just one goal conceded in the last four games. 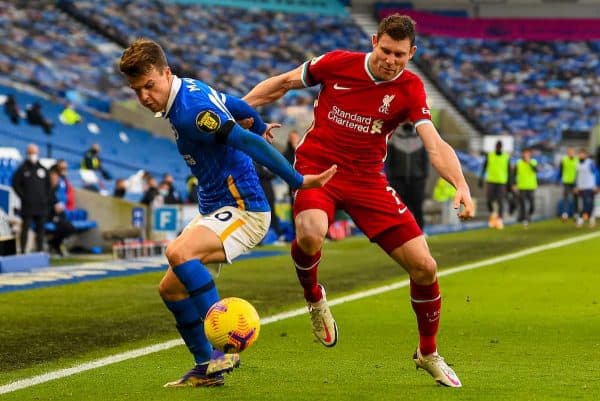 As much as we have improved recently, I can’t see us coming away with anything from Anfield.