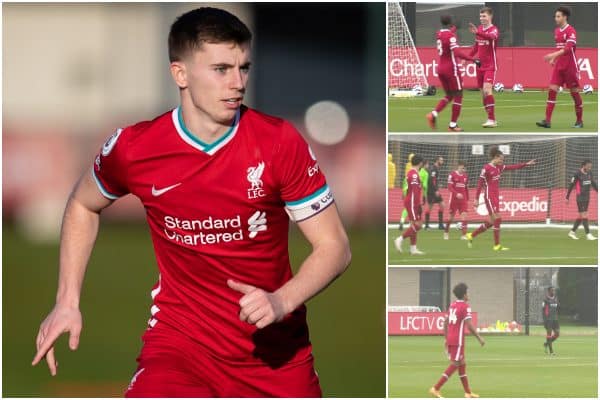 Ben Woodburn scored a hat-trick and Kaide Gordon caught the eye as a 5-1 intra-squad friendly played out at Kirkby on Saturday afternoon, with Liverpool beating Liverpool.

With no fixture at the weekend after their early exit from the FA Cup, the Reds have been afforded a rare extended spell on the training pitch prior to the international break.

While those called up by their respective nations took in a lighter session on Saturday, those to stay behind were involved in an 11-on-11 internal game, with the ranks fleshed out by some of the club’s most promising youngsters.

It saw the biggest involvement to date of Ben Davies, too, who started in the ‘away’ defence along with Nat Phillips, with the ‘home’ side questionably weighted with the majority of the senior players.

Trent Alexander-Arnold, James Milner, Fabinho, Naby Keita and Alex Oxlade-Chamberlain all wore red, along with Gordon and Woodburn, who both shone.

It was Gordon who teed up with opening goal following a smart interchange with Oxlade-Chamberlain, allowing him to feed Woodburn in the box to put it past Adrian.

The second was a straightforward move from back to front, with under-18s centre-back Jarell Quansah playing it to Fabinho, who clipped an easy ball through Davies and Billy Koumetio for Woodburn to fire in.

Woodburn made it 3-0 with his hat-trick goal, and it was Gordon who again provided, turning in the centre cirle and laying the ball through for the striker to convert.

The ‘away’ side then grabbed a goal back, as Koumetio headed in Jake Cain‘s corner, but an effort from Tyler Morton soon after led to a corner which allowed the ‘home’ side to break through Gordon and Melkamu Frauendorf.

Gordon added to his two assists with a goal at the end of that move, before Rhys Williams capped a 5-1 victory by heading Alexander-Arnold’s cross in off the crossbar.

While conclusions cannot be drawn from an internal game that will play out at Kirkby more often than is broadcast, it will have been a useful exercise for those involved.

That could particularly be the case for the youngsters drafted in, with the likes of Gordon, Quansah, Morton, Frauendorf, Conor Bradley, Harvey Davies and Mateusz Musialowski looking to have impressed.