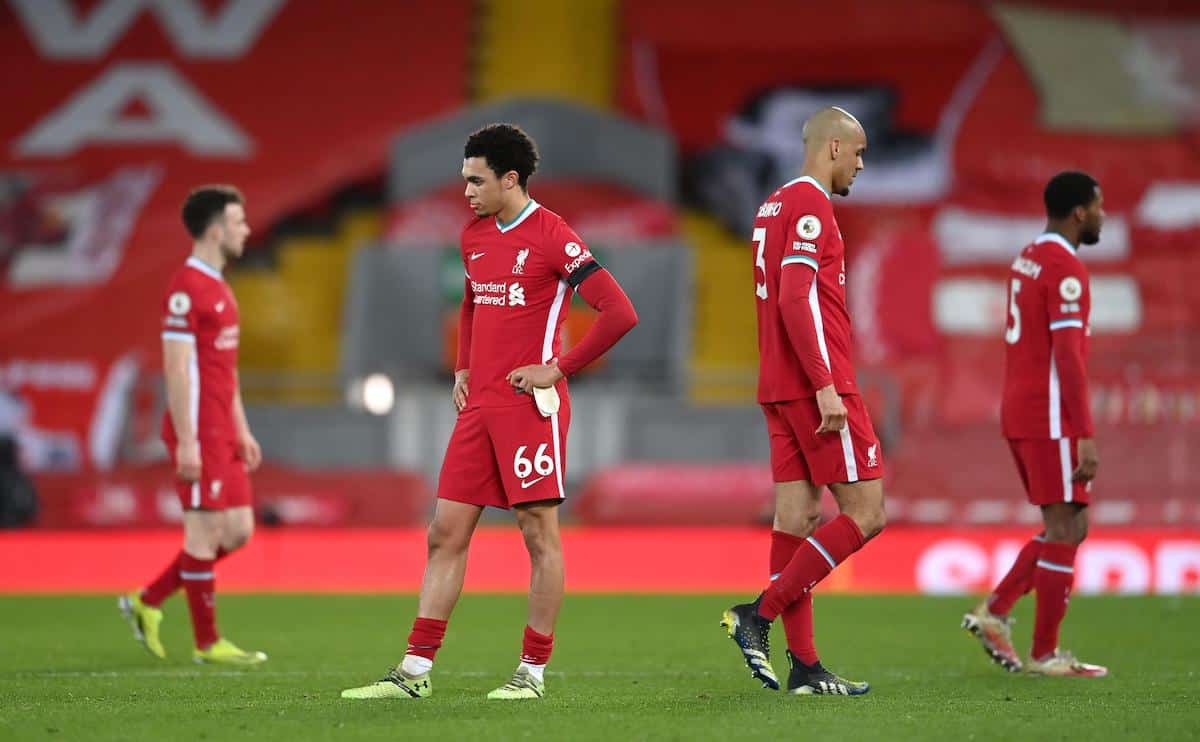 A woeful Liverpool suffered their fifth Premier League defeat in succession at Anfield, losing 1-0 to Chelsea on Thursday night.

Alisson returned after mourning the loss of his father, looking to get back to his previous top level.

The Brazilian was lucky to escape a hesitant piece of goalkeeping when Timo Werner’s goal was ruled out for offside, before being beaten by Mason Mount before half-time.

Just doesn’t look like the Alisson we know and love, but he did save well to deny Werner after the break.

Alexander-Arnold was excellent in the victory at Sheffield United last weekend, but this was far less effective showing.

Defensively, he appeared to be targeted, with Chelsea often attacking down his side, and he didn’t cover himself in glory for Mount’s goal.

Tried to make things happen in the second half, but his end product wasn’t there.

Fabinho made a welcome return to the side, back in the centre-back position he has flourished in this season.

This was a far cry from the player who has been so impressive in 2020/21, however, looking miles off the pace and seemingly being rushed back too early.

He was running in treacle for Mount’s strike, making it too easy for the Chelsea man, and he got caught out with the ball over the top a number of times. 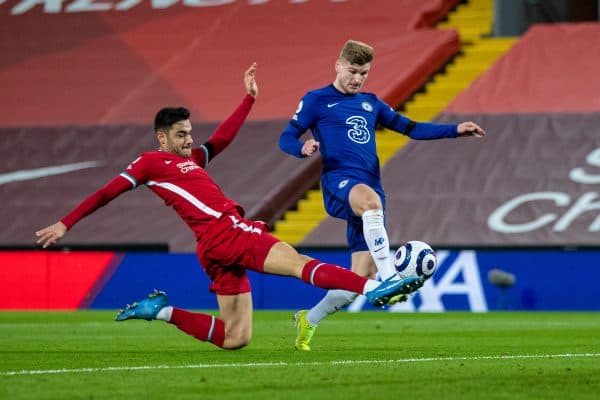 Kabak hasn’t looked wholly convincing in a Reds shirt so far, but this was a huge opportunity to shine alongside Fabinho.

It has to go down as another hit-and-miss outing for the young Turk, who looked a rash presence at the back, sometimes imitating Dejan Lovren.

Some wasteful long balls caused frustration among team-mates, particularly Andy Robertson, but he was solid enough, in fairness.

Robertson hasn’t been at his marauding best of late and that continued at Anfield.

That usual attacking thrust was almost nowhere to be seen, and his linkup play with Sadio Mane was also non-existent, with the Senegalese playing more centrally.

One poor shot summed up his night.

Wijnaldum again anchored Liverpool’s midfield, fresh off the back of an increasingly influential performance against Sheffield United.

He was less culpable than others on the night, but more influence was required from the Dutchman, who has been hailed as the Reds’ most consistent player this season by Klopp.

There wasn’t enough leadership when Liverpool needed it.

Thiago has been looking more and more in-tune with his Reds team-mates in recent weeks and he again started at Anfield.

This was a really disappointing evening for the silky Spaniard, however, who got outplayed by Chelsea‘s midfield throughout.

He got worse as the minutes ticked by, playing one poor pass over the top, and was eventually replaced by James Milner late on.

Jones was Liverpool’s best player last time around, but he struggled to replicate that brilliance on a tough night.

One lovely piece of footwork in the first half was a high point, but as has been the case in a number of Anfield matches recently, he was ineffective.

Slightly unlucky to be substituted, though.

Salah came up against his former club, looking for a repeat of his 2019 heroics.

That never looked close to happening, though, as the Egyptian King often came up against Antonio Rudiger in a muscular dual, struggling the get the better of the German.

One great pass to Mane should have led to him burying opportunity and he looked furious when Jurgen Klopp replaced him – rightly so!

Mane is still searching for his best form and he was a million miles short of it against the Blues.

Liverpool’s No. 10 looks such a frustrated figure at the moment, and if he wasn’t wasting glaring opportunities, he was needlessly losing his rag with Cesar Azpilicueta.

A shadow of the world-class player who has become a modern-day legend, he seems to have lost a yard of pace, which is a concern.

Diogo Jota was back in the Liverpool squad, but Firmino kept his place, leading the lead once more.

He was pitiful yet again, unfortunately, offering next to nothing both on and off the ball, and somehow staying on the pitch longer than Salah.

This isn’t a blip – this is someone very much past their peak, and it’s painful to watch.

Had little impact on the game, looked rusty, but tried.

Same as Ox, with some good movement.

Klopp is a legend, but that doesn’t mean he should be free from criticism.

This was a stinker of a night for the Liverpool boss, who was tactically outdone by Thomas Tuchel, with the Reds incredibly suffering a fifth home league defeat in a row for the first time ever.

The substitution of Salah was arguably his worst ever as Reds boss – shades of Fernando Torres at Birmingham under Rafa Benitez about it.

This one is on Klopp.