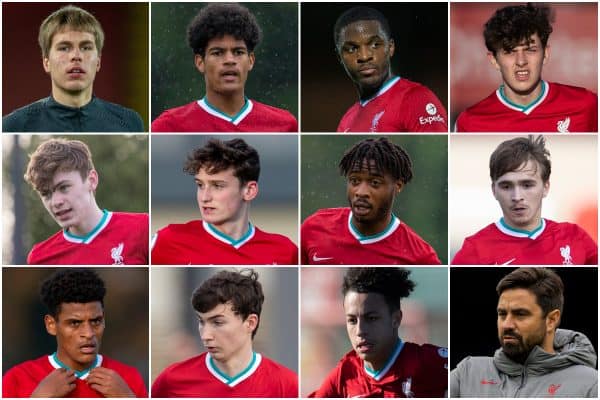 Lowdown on the 12 youngsters training with Liverpool first-team

Jurgen Klopp and his first-team staff have been running the rule over 12 of the club’s “finest talents” from the academy during training sessions at Kirkby this week.

With most of the senior squad afforded time off before joining up with their national teams later this month, a new-look group took to Kirkby on Thursday.

Among familiar faces such as Alisson, Naby Keita, Curtis Jones, Fabinho, Xherdan Shaqiri and James Milner were 12 young players deemed among the “finest talents” in the club’s academy.

That is according to Pepijn Lijnders, who has revealed that talks with academy director Alex Inglethorpe and elite development coach Vitor Matos prompted the selection of those youngsters deemed ready to step up this week.

Klopp will have been keeping a close eye on their efforts in training – along with slightly older players Neco Williams, Jake Cain, Leighton Clarkson, Ben Woodburn and Luis Longstaff – as he assesses the next group coming through.

Some will depart for international duty of their own in the coming days, but not before an internal game amongst the first-team staples on Saturday, which gives the youngsters a big chance to impress.

But who are the 12 given an opportunity under Klopp this week?

A signing from Legia Warsaw in 2019, Ojrzynski made 14 appearances in his first season with the academy and now spends his time between the under-18s and under-23s, with 13 outings so far.

He has also been a regular in first-team training when the likes of Alisson, Caoimhin Kelleher and Marcelo Pitaluga have been injured, and was on the bench for the 2-0 win over Sheffield United last month.

Unlike Ojrzynski at Bramall Lane, Davies’ inclusion in the matchday squad for the Champions League last 16 second-leg win over RB Leipzig came as a complete surprise – given he had played just once for the U18s this term.

But since then the Scouser has remained a staple in Klopp’s training squad, with the prospect of being nurtured as the Reds’ next ‘homegrown’ goalkeeper.

Having been initially pencilled in as fifth-choice centre-back this season, when Klopp’s bluff was called following injuries to Virgil van Dijk, Joe Gomez and Joel Matip, the decision was made to keep Koumetio in the academy.

The Frenchman has been able to work the errors out of his game as a result, primarily playing with the U23s, where he is forging a promising partnership with Morgan Boyes.

The U18s captain, Quansah has made more starts than any other player at academy level so far in 2020/21, with 19, leading the young Reds with distinction at the back.

A tall, dominant centre-back, the teenager is becoming more vocal as he grows into the role, while his ability on the ball has allowed Marc Bridge-Wilkinson’s side to emulate the first team with long-range passes to the flanks.

This is not the first time Beck, Ian Rush’s great-nephew, has been called up to the first-team setup, and he has deservedly returned for another taste of senior football amid an excellent campaign with the U23s.

A roving left-back who recorded a hat-trick of assists in a 4-3 defeat to Tottenham in December, Beck will join up with the Wales under-21s for the first time later this month.

Another left-back, Norris is following a similar pathway to Adam Lewis as he establishes himself as a reliable, attack-first option for the U18s, while also being able to operate in midfield.

Having returned from injury in November, the Scouser has been a first-choice starter for Bridge-Wilkinson since, and like Beck, also teed up three goals in a game in the 6-0 FA Youth Cup win over Sutton United.

Beck’s opposite number, Bradley has made the step up to the U23s look easy this season, despite often coming up against considerably more experienced left wingers – such as Arsenal‘s Reiss Nelson.

There are shades of Andy Robertson to the Northern Irishman’s game, and like Beck he already has brief experience of training with the senior side, having been called up to Melwood in pre-season.

The star of the academy this season, only striker Layton Stewart (17) has scored more goals at youth level than Morton (nine), with the midfielder directly contributing to 14 goals in his 16 appearances.

A hardworking, versatile midfielder with an eye for the spectacular, Morton is another to have taken to life with the U23s with consummate ease.

Injuries have hampered his momentum, but there are high hopes for Balagizi within the academy, with the physically imposing midfielder marrying his strength with dexterity and skill in possession.

Signed from Man City when he was 11, the DR Congo native catches the eye most weeks in the U18s, and along with Quansah and Norris, will join up with the England under-18s for their friendly against Wales on March 29.

A summer signing from Hoffenheim, Frauendorf has almost immediately taken up responsibility as one of the U18s’ most important players, whether that is as a No. 10, deeper in midfield or out wide.

Born in Ethiopia but a regular in the German youth sides, Frauendorf is a hugely talented youngster who has three goals and two assists in 16 outings so far for the Reds.

When Klopp held his training session on Thursday, the majority of the focus was on the inclusion of Musialowski, who like Frauendorf arrived as a new signing last summer.

The Pole is drawing unhelpful comparisons with Lionel Messi due to his magnetic dribbling ability, and has recently enhanced his reputation with stunning solo goals against Newcastle and Sutton United with the U18s.

The newest arrival at Kirkby, Gordon is already comfortable with first-team training having made the step up to Derby’s senior squad prior to his January switch to Liverpool.

Now a fixture with the U18s, the teenager is beginning to showcase his creative and finishing abilities, typically from the right of the attacking trio.