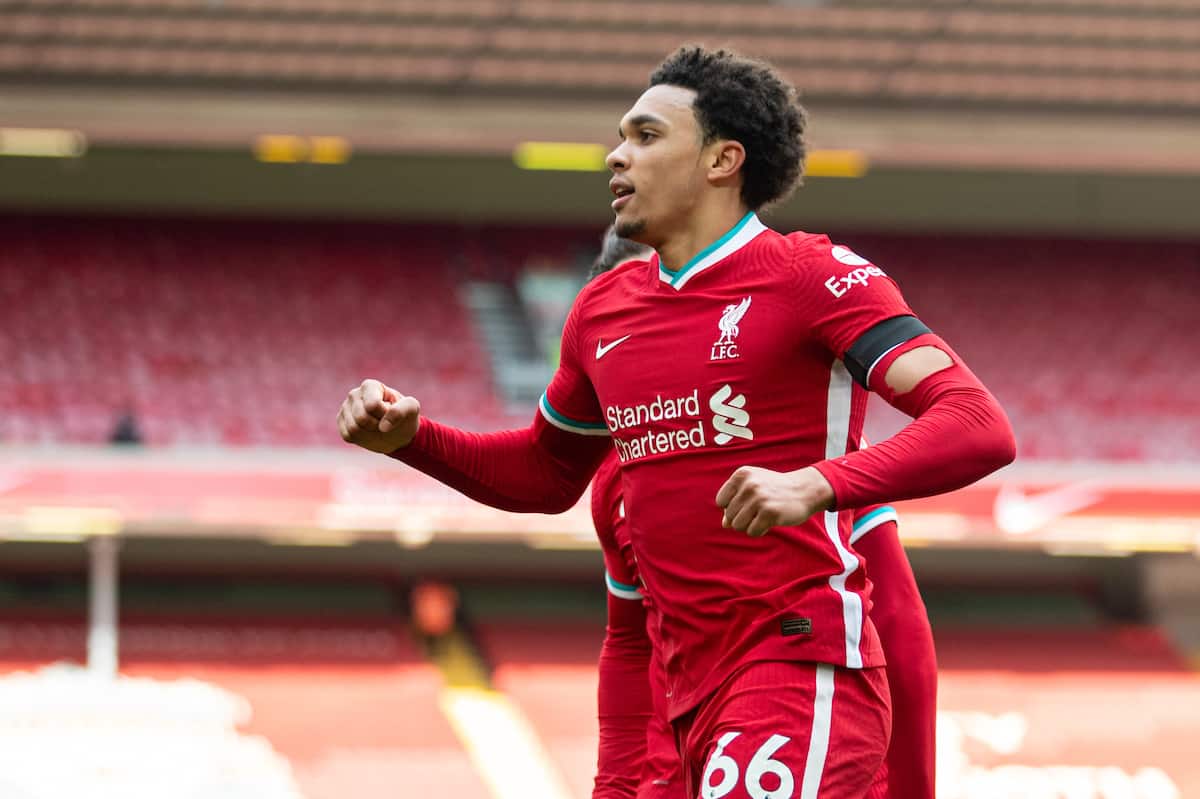 Liverpool notched their first win at Anfield in 115 days thanks to goals from Mohamed Salah and Trent Alexander-Arnold, and fans were over the moon.

The Reds were out to end an eight-game run at Anfield without victory and while it started with the right intentions having dominated possession and territory, they would concede with little fuss.

Ollie Watkins would be credited with the goal, one which ought to have been saved by Alisson on the cusp of half-time.

It then looked as though the barren run in front of goal in open play had come to an end thanks to Roberto Firmino, only for VAR to get their sticky hands on it and ruin the game once more.

An equaliser would materialise, however, through Mohamed Salah who would bring the wait for a goal at Anfield from open play to an end after 756 minutes from close range.

And just when the game looked to have petered out, Trent Alexander-Arnold popped up with a stunning rocket into the bottom corner to secure the first win on home soil since December.

The application of VAR continues to ruin the game…

YET AGAIN JUST PUT IT IN THE BIN. Ruining the game right in front of our eyes.

That is absolutely shocking. The game is a joke right now

Make me hate football, please. I can't handle these rules and don't want to watch it anymore!

It's a good job football already has a lot of supporters because there is no way on earth anybody gets into this sport in the format it is. Absolutely shite.

Unbelievable decision. Cash touched that ball, you could see the way he subsequently pulled his foot away. He shaped as though he touched it. Say it so often when it comes to PL, but people who know football know that, PL referees don't seem to….#LFC #LIVAVL

“VAR is often a solution looking for a problem.”

I’m sorry, but VAR gets more ridiculous by the day. How on earth can they say with any confidence that that is offside? Same as last night’s disallowed goal. Ridiculous.

Football in empty grounds is shit enough. The shambolic manner in which VAR is being used by officials manages to suck any remaining joy out it.

Using 2D visual assets to make a 3D decision. Camera is perpendicular to the action by a good 8 meters. Lines drawn too thickly to determine mm-wide decisions. Arbitrary data pts (exact moment the ball is played) Joy of a goal replaced by the wait for the deployment of technology

But, thankfully, it didn’t cost us all 3 points…

I'll be honest, I didn't think Liverpool had late winners in them anymore. This could be a really important one.

Firmino was the clear standout on the day…

I love a confident Bobby Firmino, you know. Always feels like there’s a sexy backheel incoming at some point when he plays with confidence.

Firmino miles better today, showed glimpses of old. Good to see Mane get some minutes too, can’t be a bad thing to try and play him into some kind of form ahead of Wednesday.

Milner done a steady job too, as expected.

Bobby played very well today honestly. Really happy with how he did, tragic that he doesn't have a goal to show for it

Firmino has held the ball up so well, he’s progressed our attacking play so well, moving the ball forward

That was a very good performance which got the result that it deserved. Brilliant goal by TAA (despite a shaky second half). Klopp, castigated in midweek, took the risk today and was rewarded.

FT: #LFC 2 Villa 1: Alexander-Arnold's emphatic stoppage-time strike sealing a first home win of 2021 for Klopp's men. Massive boost to their hopes of a top-four finish. Watkins had fired Villa in front before Salah equalised. Unconvincing but crucial for the Reds.

Liverpool are becoming really easy to contain, the current implementation of VAR is criminal and Alexander-Arnold has Gerrard DNA. The takeaways from that match. Big points. #LFCdigest

The winner was only Liverpool’s fourth league goal from outside the box this season.

Liverpool are now fourth in the table.

GET THE FUCK IN. Honestly how is a goal in footy the difference between feeling like this and a full blown breakdown haha Either way, Trent has the reds amongst it???

Get in Reds. Massive 3 points. Win at Anfield finally. Top 4 in sight. Confidence booster heading into home game against Real. Thoroughly deserved that win today. Trent stepping up with a Gerrardesque winner in injury time. Up the Mighty Reds. #LFC #YNWA

Massive, absolutely massive three points for Liverpool. Firmino and Fabinho both fantastic. But my god, Trent Alexander-Arnold take a bow son, that’s how you let your football do the talking.

And breathe. Onto Wednesday…

Far from a perfect performance, but that result could potentially exorcise a number of demons for Liverpool.

Huge win and a great goal to get it to keep top-four hopes alive. Firmino much improved & should start vs Madrid and finally 3pts at home in 2021. Trent is just superb, isn’t he?