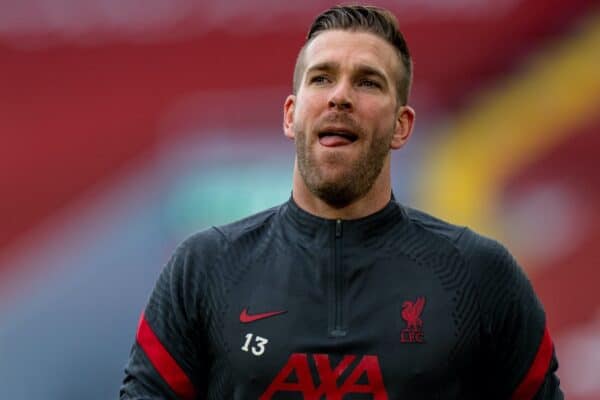 Liverpool have confirmed Adrian has been offered a new contract, with the Spaniard currently registered as part of their squad list for the 2021/22 campaign.

Adrian‘s current deal is set to expire on July 1, with it previously expected that the No. 13 would depart having lost his place to Caoimhin Kelleher.

But it has since been reported that, with Kelleher potentially departing on loan this summer, the 34-year-old would stay to serve as deputy to Alisson.

This has effectively been confirmed with the publishing of Liverpool’s retained and released list for 2021/22, with Adrian offered a new contract.

It had been claimed that there was an option to automatically extend Adrian‘s deal by a further year to 2022, but it remains to be seen whether this is the case – or perhaps the Reds’ latest offer is on reduced terms.

Gini Wijnaldum is also listed as having been offered a new deal, though the Dutchman has announced his intention to leave on a free transfer.

He is now believed to be close to joining Paris Saint-Germain on a lucrative deal, having been linked with a switch to Barcelona in recent months.

Liverpool had already confirmed offers to both Yasser Larouci and Remi Savage in the academy, though barring a major change of heart Larouci will move on.

A number of fringe players have been named on the club’s retained list and unless a transfer or other arrangements are agreed, they will be required to report to Kirkby for pre-season on July 12.

Jurgen Klopp will make a decision on the future of Takumi Minamino following the end of his time at Southampton, with the club already fielding enquiries into his availability.

The Reds have extended the scholarship of 18-year-old goalkeeper Oscar Kelly – who was named in the Champions League squad ahead of the quarter-final second-leg clash with Real Madrid – into a third year.

Mateusz Musialowski, Melkamu Frauendorf and Fabian Mrozek, who all joined the Liverpool academy last summer, are yet to sign professional terms, having been listed alongside Harvey Davies as scholars.

Their futures are likely to be a priority in the coming months, with the club’s retained list subject to a number of changes before the new season begins.