The Brazilian national team have put question marks next to their name in regards to competing in Copa America as the playing group debate their participation.

It comes amid the concern surrounding the surge of COVID-19 cases in host nation Brazil, who took over after Argentina and Colombia were dropped as hosts due to the same issue.

Members of the squad who ply their trade in Europe had sought an emergency meeting with the Brazilian Football Confederation to convey thoughts of not participating in the tournament, according to AS.

And when Tite confronted the media on Thursday, he revealed his players have opinions about their involvement in the tournament that starts on June 13.

“The players have an opinion, contrary to the president, about playing the tournament. That is why our captain, Casemiro, is absent here today,” Tite said when asked if players had requested permission not to be involved.

“We have a very clear opinion [about Copa America], after seeing the entire chronological sequence of events, Juninho and I spoke with the president and told him our opinion.”

Liverpool, of course, have a vested interest with Alisson, Fabinho and Roberto Firmino all called up to represent the Selecao this summer.

Brazil are to play Ecuador and Paraguay in the coming days as part of their South America qualifiers for the 2022 World Cup, which will be played as planned and is likely to see the Reds trio feature.

But following those fixtures, Tite has stated that his side’s position over Copa America will be made known publically following radio silence in the last few days from the Brazilian camp.

“We want to tell the fans what they think, but not now so that we can prioritize playing well and winning the game against Ecuador,” Tite added.

It’s a messy situation and one many could have foreseen with Brazil’s COVID-19 cases continuing to rise amid another wave, which made it hard to even find four cities willing to host games. 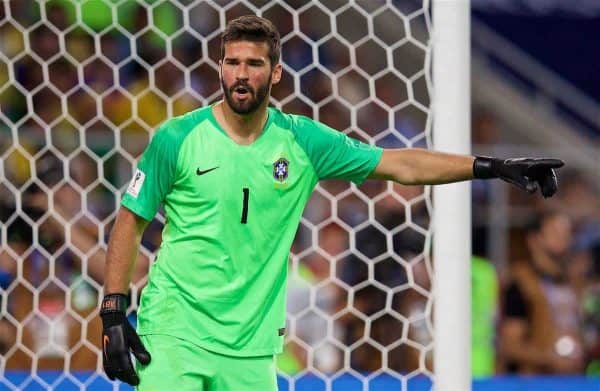 And AS go on to state that “the players are not satisfied and threaten to blow up the situation,” presenting a case for the organisers to answer during a continued pandemic.

It an evolving situation to keep an eye on as Brazil’s absence in the tournament would present Alisson, Fabinho and Firmino an extended break, but more importantly, could keep them safe.