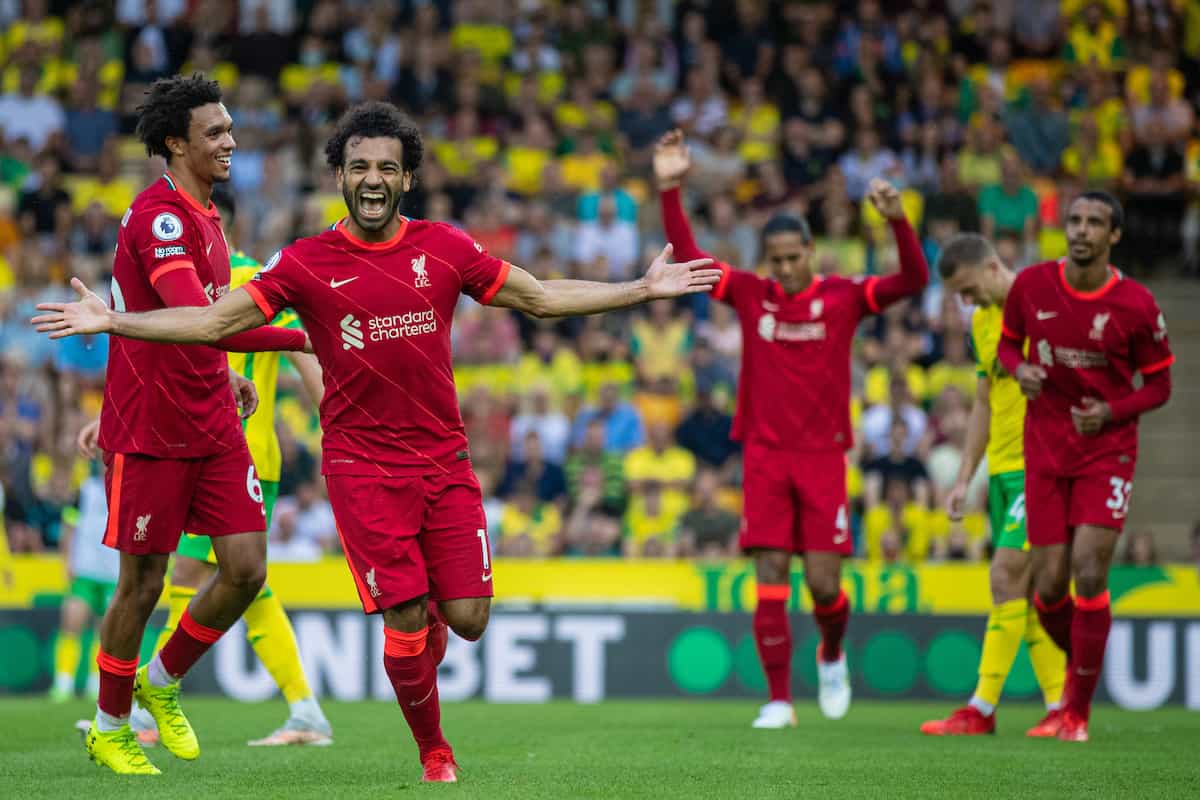 Mo Salah wrote his name in the record books once more as Liverpool got the new Premier League campaign underway in perfect fashion with a 3-0 win at Norwich.

The new season is upon us and Liverpool’s first hurdle was newly-promoted Norwich, where the presence of Virgil van Dijk was an early reason to celebrate in what was his first league start since October 17.

The midfield selection gave pause for thought with Fabinho tasked with starting from the bench as James Milner, Alex Oxlade-Chamberlain and Naby Keita were rewarded for their pre-season form.

A sea of yellow and the much-missed sound of fans greeted the two teams to breathe life back into the game we love, with the travelling Kop delivered early joy.

While Norwich had started to build up a head of steam at the midway point of the half, Trent Alexander-Arnold would find Mohamed Salah on the edge of the area where an uncharacteristic bad touch would work in the Reds’ favour.

It would find a forward running Diogo Jota who slid the ball under Tim Krul, who had largely been untested at that point, to get the scoreboard up and running for the new campaign.

It came after Liverpool looked most likely to find joy down the left flank, with Sadio Mane and Kostas Tsimikas working well in tandem in addition to well-placed balls from the left-back.

The midfield trident were not firing on all cylinders but Alisson remained rarely tested despite Norwich‘s best intentions, with Teemu Pukki the only one to force a notable save throughout the opening 45.

Liverpool looked to turn it up a notch at the start of the second half, quick to press the hosts and get in behind, where Jota caught the eye early on with a brilliant solo run.

The Canaries were up for the fight to ensure they remained within striking distance, which Klopp looked to change by introducing Fabinho and Roberto Firmino at the hour mark.

It brought on a fresh wave of attacks with Alexander-Arnold and Tsimikas peppering Krul’s goal and it was only a matter of time before the second arrived.

And it came thanks to the combination of the famed front three that ended with an easy tap in for Firmino after Mane got in on the act and Salah unselfishly supplied the assist, his second of the day.

But he wasn’t done there as he would add the third less than ten minutes later with a sumptuous left-foot finish, a goal that puts his name in the record books as the only player to score in the opening game for five seasons in succession.

Alisson would then make a series of brilliant saves to deny Norwich at the death to preserve his clean sheet as Harvey Elliott got a taste of the action on a winning night for the Reds.

Next up, Burnley at a full-capacity Anfield.