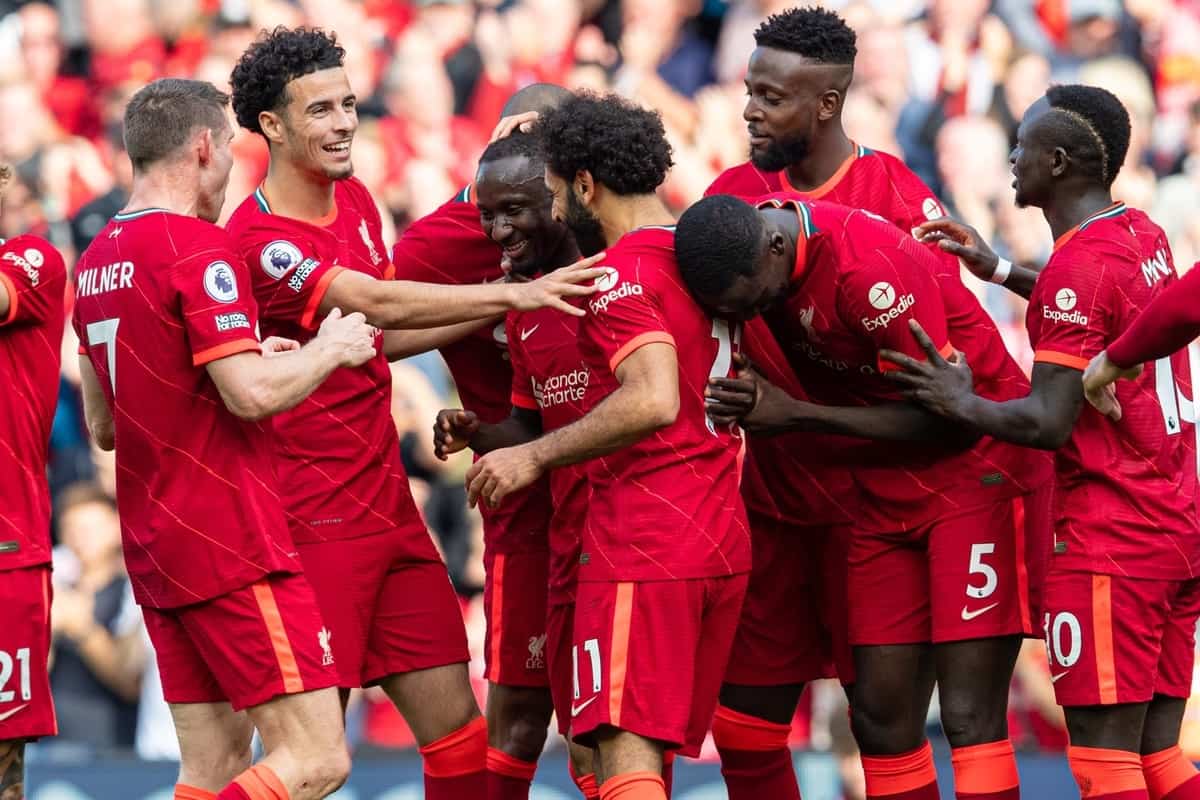 Liverpool beat Crystal Palace 3-0 at Anfield in the Premier League on Saturday, with Ibrahima Konate impressing on his debut as Sadio Mane hit a century.

The Reds welcomed Palace to Anfield, with only a win satisfactory for the hosts as they looked to go top of the table.

After missing a number of good chances in the first half – Diogo Jota somehow failed to convert from two yards out – Liverpool went in front through Mane’s close-range finish before the break.

Palace enjoyed a strong spell after the restart, but Mohamed Salah fired home his customary goal to ease the nerves inside Anfield.

That's a really good win for #LFC because Crystal Palace were much better than the 3-0 scoreline suggests – today was a battle. Also perhaps shows that the strength of Jurgen Klopp's squad is slightly underrated given he made six changes from midweek.

The Reds have got no money but they’ll still win the league. pic.twitter.com/b2peUsoaKZ

The exact kind of performance a lot of teams experience after an intense period which included a midweek CL game. Plenty of rotation yet still came through. Keep talking us down , we just don’t care #LFC #Revengetour pic.twitter.com/CY9Hr4HKoU

Proper win. Didn’t get out of second gear and didn’t need to, echos of 2019-20. Steady introduction for Konate, he’ll come on leaps and bounds. Mo Salah is inevitable, Naby Keita… well then. #LFCdigest

?The Reds were pretty rubbish but we still won three nil?

No money, but we could well still win the league. ? pic.twitter.com/OkXeLg6MWV

Another 3 points on the board, up the top of the league Reds ??

Also think for his first game Konate did very well. Still lots more to come from him as he gets used to league and our style of play. To be able to switch between him, Matip & Gomez is insane.

A solid start to life on Merseyside. ? pic.twitter.com/QNEvhI0Nfs

Konate what a debut!

Hope Thiago is okay! He's been great this season!

Reckon Thiago won’t be a knock as we aren’t allowed to fully get our way in games. ?????

All I can think of now is about Thiago's injury. I hope it was nothing serious and just a precaution. We need him badly this season ??

Gutted for Thiago, was playing quality until his injury.

Super happy for Naby Keita, used to knock them in for Leipzig like that, celebration oozed confidence, a confident Naby is a dangerous Naby! #LIVCRY

Naby Keita celebration after scoring a screamer is so cold. Are you not entertained? ?? pic.twitter.com/uzTDVoJFjE