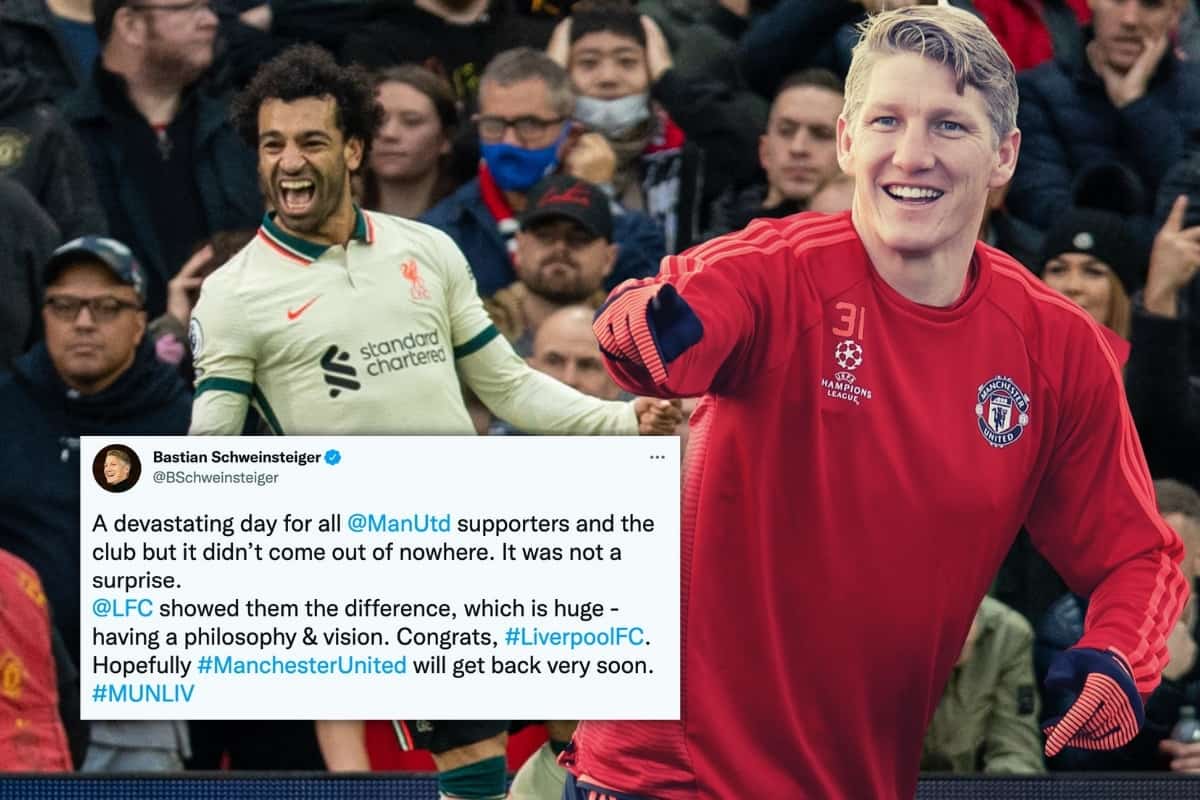 You know it’s bad when a former player points out a “huge” gulf between you and your rivals, and that is exactly what ex-Man United man Bastian Schweinsteiger has done.

United are, undoubtedly, leagues below the likes of Liverpool, Chelsea and Man City in the landscape of the Premier League.

Once a superpower of English football, the Manchester side are now also-rans; a Europe League-standard club whose legendary former manager, Alex Ferguson, could hardly bear to watch on Sunday.

The decision to sign Cristiano Ronaldo, under supposed pressure from City, has dealt Ole Gunnar Solskjaer with a problematic albatross, with the Norwegian not capable of managing a player of his ego despite being a fading force.

Solskjaer described Liverpool’s 5-0 victory at Old Trafford on Sunday, then, as his “darkest day” in charge of the club.

But for Schweinsteiger, who played for United for two years from 2015 to 2017 – after winning eight Bundesliga titles with Bayern Munich and a World Cup with Germany – it “didn’t come out of nowhere.”

A devastating day for all @ManUtd supporters and the club but it didn’t come out of nowhere. It was not a surprise. @LFC showed them the difference, which is huge – having a philosophy & vision. Congrats, #LiverpoolFC.
Hopefully #ManchesterUnited will get back very soon. #MUNLIV

Taking to Twitter after the game, the 37-year-old former midfielder described the difference between Liverpool and United as “huge.”

“A devastating day for all Man United supporters and the club but it didn’t come out of nowhere. It was not a surprise,” he wrote.

“Liverpool showed them the difference, which is huge – having a philosophy and vision.

“Congrats Liverpool. Hopefully Manchester United will get back very soon.”

While Gary Neville maintained his backing of Solskjaer as he picked apart the defeat for Sky Sports on Sunday, Schweinsteiger perfectly sums up the issue at Old Trafford.

Unlike Liverpool, there is no clear vision with United, and the club have made a rod for their own backs with expensive, crowd-pleasing deals for the likes of Ronaldo, Paul Pogba and Harry Maguire.

It is a brilliant feeling for a Reds fan, with the problems foreshadowed long before they occurred – and fortunately, Jurgen Klopp‘s side are there to benefit.