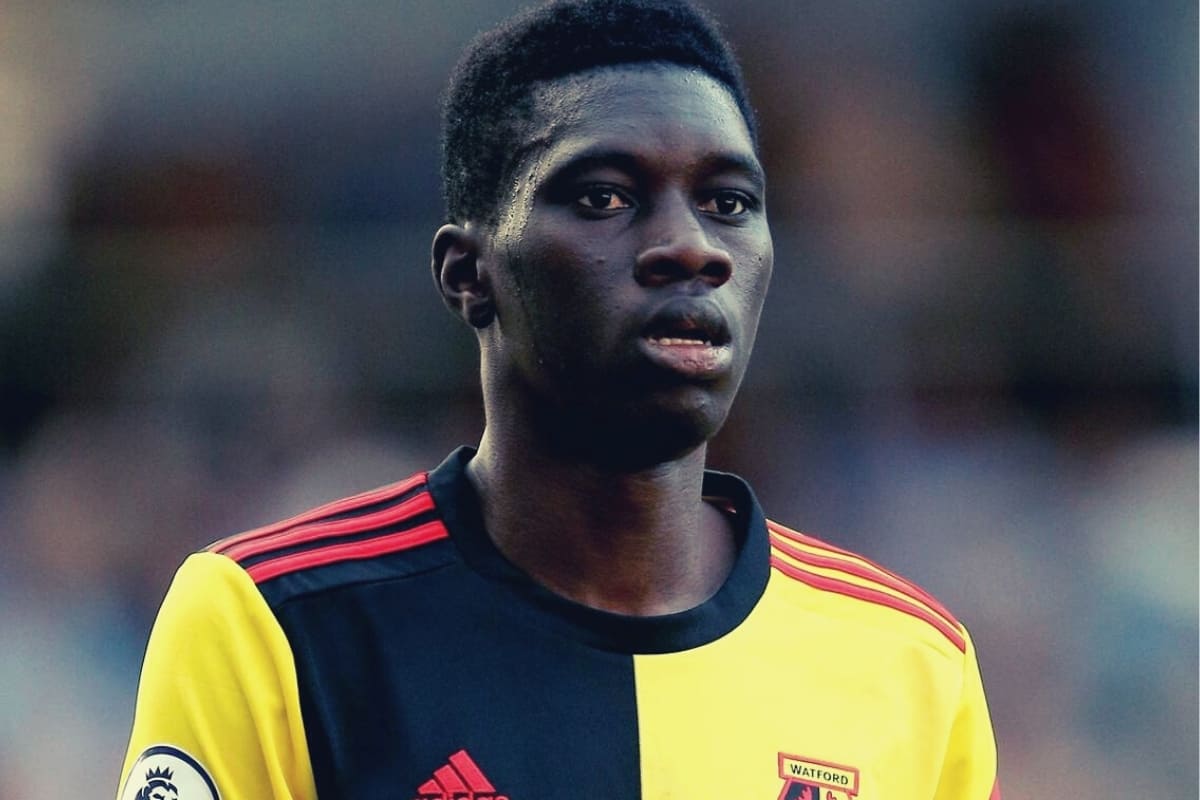 When the final whistle blows on Saturday, whether Liverpool picked up the win or not, don’t be surprised to see Jurgen Klopp make a beeline for the player wearing Watford’s No. 23 shirt.

Sarr has long been on the Reds’ radar, and emerged as a genuine possibility as club analysts pitched a three-man shortlist to Michael Edwards ahead of the summer of 2020.

As Klopp sought another option in the final third, capable of competing with Mohamed Salah, Sadio Mane and Roberto Firmino, Sarr was identified along with Jonathan David and Diogo Jota.

The primary target, of course, was Timo Werner, but when the money involved started to make less and less sense for Liverpool, they turned to their list of alternatives.

From the outside looking in, it even seemed as though Sarr was top of that list, and journalists on Merseyside confirmed the club’s interest, with an enquiry made as to the player’s availability.

Again, it appears finances stopped the Reds short, and the success story of Jota’s first year at Anfield is made even sweeter by the terms of their £45 million agreement with Wolves.

Whereas Watford sought to structure a potential £50 million deal for Sarr to their benefit, Wolves agreed to an initial payment of just £4 million for their versatile striker, which itself was offset by Ki-Jana Hoever‘s move to Molineux.

Liverpool felt the loss of revenue during the COVID-19 pandemic heavily, and ultimately the move for Jota suited them better than any agreement over Sarr could.

Few within Klopp’s staff or the club’s hierarchy will regret the decision, given their No. 20 has already scored 16 times in 39 games, but there remains a sense of what could have been when it comes to the leading light of Saturday’s opposition.

Sarr was heading into a campaign in the Championship when he learned of Liverpool’s approach, and despite a outside belief he deserved to stay in the top flight, he knuckled down and shone.

Having scored five and assisted six in 28 games in his first season in the Premier League – two goals and one assist of which came against the Reds at Vicarage Road – Sarr upped that to 13 goals and 10 assists in 39 games in the Championship.

His pièce de résistance arguably came with a two-goal, three-assist showing as Watford wiped the floor with Bristol City on their way to a 6-0 win, and the 23-year-old ended the season as the Hornet’s Player of the Year and Players’ Player of the Year.

“It’s not just this year, in the Premier League as well he was a massive threat and he’d give full-backs torrid nights,” vice-captain Tom Cleverley told WatfordFC.com after the ceremony.

“We really hope we can keep hold of him for as long as we can, he’s a massively important player to our forward play but also works his socks off.”

According to The Athletic, there is a sense of patience in the winger that granted Cleverley’s wish – at least for another season – with Watford rewarded with a fine start to the new campaign.

Set the familiar backdrop of upheaval in Hertfordshire that has seen manager Xisco removed and Claudio Ranieri instated ahead of the Liverpool game, Sarr has already struck four times in seven outings.

Tellingly, he has scored more than half of Watford‘s goals in the Premier League so far this term, and whenever he has found the back of the net, the Hornets are unbeaten.

Sarr boasts a blend of pace, physicality and unpredictability that makes him a real threat in the final third, while standing at 6’1″ he is a fearsome proposition when, as is increasingly the case, he displays the work ethic needed to reach the top.

It is no surprise, then, that Mane is an admirer, sending him a welcome message upon his move to England and telling Watford‘s then-captain Troy Deeney to “take care of my boy” upon catching up at Anfield.

The feeling is mutual, of course, with Sarr pointing to Mane as an inspiration in an interview with BBC Sport Africa in 2019.

“I watch all of Sadio’s videos. His accelerations, the dribbles, I watch everything. I like Sadio,” he said.

Their meeting on Saturday will come soon after time together with the Senegal national team, with whom Sarr has already forced a shift in role for Mane.

In both victories over Namibia this month, it was Sarr on the left and Mane as No. 10; in the first game, a 4-1 win, Mane scored one and assisted two, while the second, a 3-1 win, he laid on another two assists.

For Senegal manager Aliou Cisse, it is all about fitting in all of his best forwards whenever possible, but at club level, there may well be considerations at Liverpool over whether Sarr could serve as Mane’s successor.

The reports of Mane’s decline may be greatly exaggerated – he has, after all, already scored five goals in nine games this season – but at 29 and with less than two years left on his contract, there are understandable questions over how much longer he will last.

With Mane and Salah both turning 30 within the next year, a time will come when Liverpool need to bring in convincing threats to their starting roles within Klopp’s side.

The club should be moving heaven and earth to tie Salah down to a new long-term deal, but it is debatable whether they should do the same for Mane or, as has been the case with Jota and Firmino, preside over a gentle changing of the guard on the left.

The Athletic report that Sarr is likely to depart Vicarage Road next year, and if the player’s agent is to be believed – claiming in February that “everything was set” for a January move prior to a late collapse – Liverpool will remain in the running for his signature.

There will almost certainly be alternatives lined up again, but the stars should be more inclined to align this time around if Sarr seeks an exit and the Reds target a new left winger.

Keeping up his scintillating start to the season can only boost Sarr’s chances – though Klopp will be hoping it doesn’t come at Liverpool’s expense this Saturday.