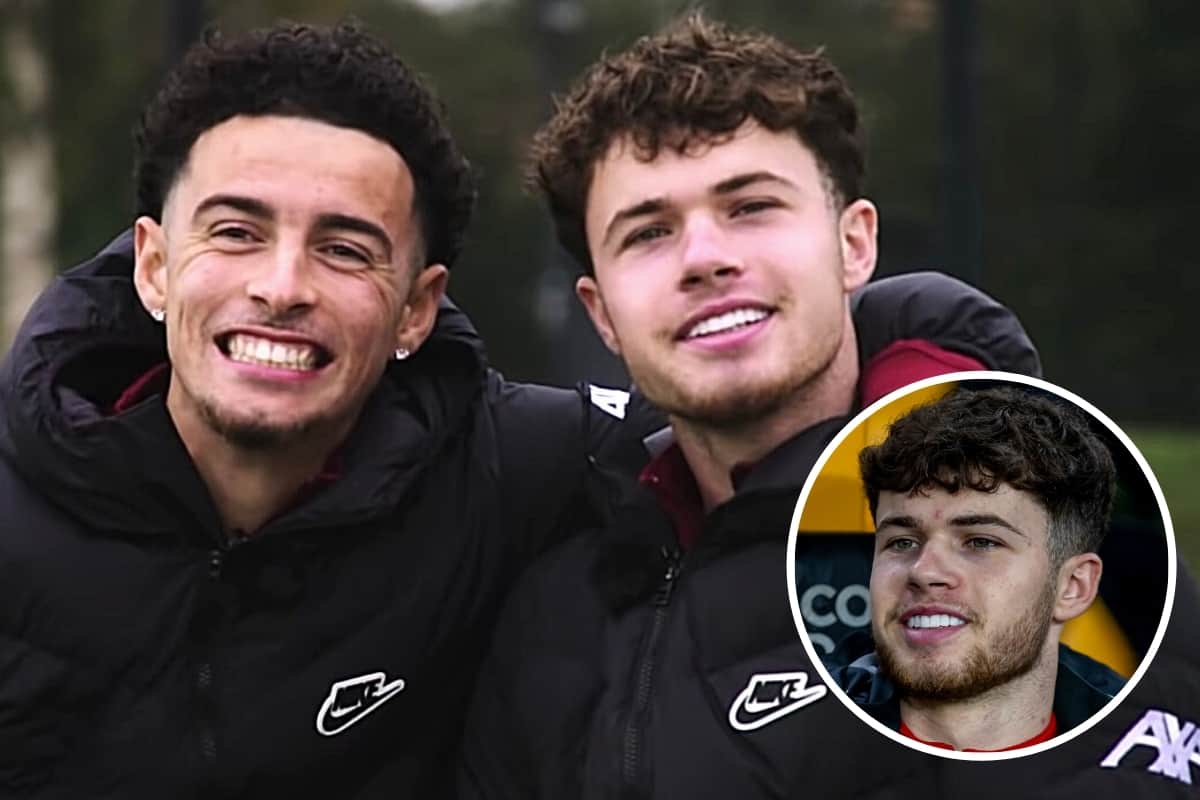 With Neco Williams joining Curtis Jones for a special interview with two of Liverpool’s under-9s players, the right-back was unexpectedly roasted for his ‘Turkey Teeth’.

For most, the term ‘Turkey Teeth’ will surely be a new one. Though not for the Liverpool squad, of course.

In recent years, Jurgen Klopp and his players have slowly started sporting sets of ultra-white, square teeth, with the manager joining Roberto Firmino, Fabinho and Sadio Mane among others.

The phenomenon is an extreme one, which involves real teeth being shaved down to pegs before expensive, white crowns are installed, with the term coined as the process often takes place in Turkey.

Williams’ underwent his transformation in 2019 – not long after his breakthrough into the senior setup – though he insists they are still his natural teeth.

The right-back sat down alongside Jones for an informal Kop Kids interview with Liverpool U9s duo Josh and Carter, with the subject brought up in a game of ‘Overrated or Underrated’.

“These are real,” Williams insisted, with Jones telling him to “stop lying lad!”

A razor-sharp Josh fired back: “You’ve taken your nan’s dentures out and put them in your mouth.”

Both Jones and Williams have been with Liverpool since U9 level, and their banter with the youngsters shines through in an entertaining video.

“I don’t think I heard a word out of his mouth until…last year,” Jones said of his long-time team-mate. “That was when he started speaking I think!”

As part of ‘Overrated or Underrated’, all four agreed that VAR is overrated, with Jones telling Josh and Carter: “I hate it as well.”

The duo disagreed on who was most likely to be late for training, sent off for arguing with the referee and Jones’ recent nutmeg on Williams at Kirkby.

With Jones having now broken the 50-game mark for Liverpool, and Williams being named in the matchday squad on 75 occasions including 25 appearances, they are role models for young players like Josh and Carter.

Given the cost of upkeep and damage to their natural teeth, though, it is encouraging that the U9s agree that Williams’ ‘Turkey Teeth’ aren’t for them!