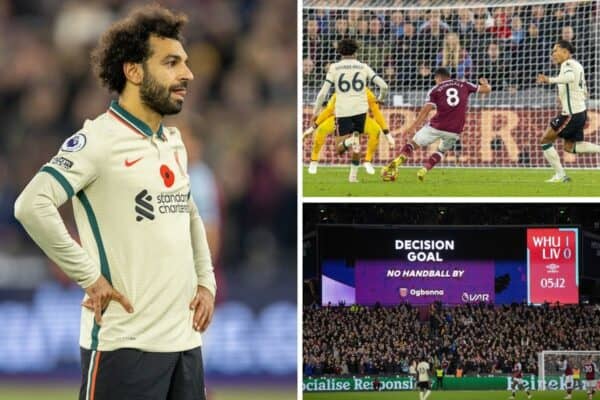 For the first time since April Liverpool were left with the sour taste of defeat after playing into West Ham‘s hands, leaving a 3-2 loss to simmer during the international break.

Two goals from corner balls and one from a counter-attack was what would derail Liverpool off the track towards what could have been a club record 26 games without defeat.

Trent Alexander-Arnold and Divock Origi both offered hope but after being their own worst enemy, the Reds could not take the chances they had to make up for their mistakes.

West Ham were worthy of their win and leapfrogged Liverpool in the table, leaving plenty to ponder as players now jet off around the world before returning for the hectic festive period.

After the loss, This Is Anfield’s Joanna Durkan (@JoannaDurkan_) and Jack Lusby (@LusbyJack) were joined by Lewis Bower (@LewisBower2021) to discuss some questionable decisions, what went wrong and if the break is a blessing in disguise for once.

LEWIS: Firstly, a clear cut red. And I don’t doubt that it was accidental.

However, if a player is endangered to the extent Jordan Henderson was yesterday, for me, it shouldn’t matter. If you play for the ball, however ill timing means that a play is endangered, the same rules apply.

Cresswell perhaps could’ve controlled his body better. Henderson can perhaps count himself lucky not to pick up a serious injury.

JOANNA: The Cresswell tackle is the staggering one out of the two, mainly for the no-decision on Craig Pawson’s part. It’s a red every day of the week and yet it was not even deemed a foul!

He had a woeful game, from the perspective of either team, and I don’t think Klopp was wrong when he spoke of “we have two people hiding” when it comes to the on-field ref and VAR.

Pawson has always been indecisive with the technology since one of his first games at Anfield against West Brom, it always sticks in my mind, and it was on show again. The inconsistency in this league is baffling.

JACK: Watching it in real-time, I wasn’t convinced that either decision should have gone against West Ham.

Initially, I thought Alisson was just weak and too preoccupied with Antonio for the opener, while Cresswell’s challenge seemed more like misfortune, a result of him ‘bouncing’ off the ball.

No doubt many within the stadium felt this way as the game played out, but with the benefit of replays, it’s clear that both were mistakes from a pathetic referee and VAR combo.

JOANNA: As for the first goal, I was more of the thought it was Antonio who was impeding Alisson and, in turn, Ogbonna got the leap and the upper hand.

It’s one of those ones that you’re aggrieved if it’s against you but are willing to wave on it it goes in your favour. Alisson had to be stronger and his teammates needed to back him up and alert the referee to their tactics.

LEWIS: I agree with Joanna there. Unfortunately, Alisson has to be stronger in that situation. Should Mo Salah have bumped into Fabianski in a similar fashion, outrage would ensue should it not be given.

However, a potential handball seemed to have been ruled out hastily in comparison to the microscopic nanosecond replays we have become accustomed to. In Alisson‘s defence, it seems too easy to point out the scorer should’ve been marked. It was a soft goal to concede.

Where did it all go wrong?

LEWIS: Liverpool created enough chances to win the game and although free-scoring at times, they’re not always a unit I’d consider ‘clinical’. More ruthless in the volume of chances they can create.

The situation seems to start and finish in the midfield. Fabinho, thwarter and defuser of the Liverpool midfield of the past two years, is being tasked with far too many fires to extinguish and a lot of ground to cover.

It’s clear the midfield has been tweaked from the disciplined roadblock of Wijnaldum’s tenure to a more adventurous structure, but gaps are far too prevalent.

Fabinho is left in no man’s land, neither here nor there with little he can do as his midfielder counterparts are high up the pitch and scrambling to get back. It’s up to Klopp to find the balance.

JOANNA: It was all just so disjointed and imbalanced. The midfield couldn’t control the tempo and it was another example of having a soft underbelly, also in defence.

Where was the foul on Jarrod Bowen leading up to the second goal? There were at least three Reds there, none of whom were on a yellow card. You can’t just be letting that situation ride out.

A lot of errors made for a sloppy showing and while Mane could have rescued a point late on, needing to score at least three goals again cannot be the way forward this season.

JACK: There has been an overriding feeling throughout Klopp’s reign – and before that – that Liverpool simply don’t know how to play against sides like this.

Brentford laid out the blueprint earlier in the season and West Ham added the flourishes needed to turn a draw into a win; it was all very Watford circa 2015.

Whether that is a mentality issue or a problem in preparation is unclear, but there were too many vacant performances – from Alisson to Jota.

One moment that baffled me was Van Dijk jogging back as Antonio raced through for what would have been a one-on-one had Trent not forced him into a misstep.

Was that arrogance? A feeling of ‘we’re too good to lose here’? Perhaps not, but it would explain a lot…

And for once, does the international break come at the right time?

JACK: Not for us! Two weeks after a chastening loss can be an agonising wait.

But for Liverpool it could be beneficial, particularly with the injuries throughout the squad – having Milner, Jones and perhaps even Keita back would be really useful given the midfield issues.

It seems Firmino’s layoff will be longer, but at least it will be a fortnight without games that can allow him to speed up his recovery.

JOANNA: In a way, yes. We need the options back in midfield as Jack mentioned there, Thiago still needs to get back up to speed and Keita, Jones and Milner will, hopefully, be available.

It’s not the best result or performance to have to sit on but it offers a reset if you like and a chance for the manager and his staff to nail down the improvements needed.

Liverpool have three home games in a row on their return and that needs to act as the perfect foundation for what will be a busy finish to the year. All that’s to say is, I’ll take a 1-0 against Arsenal.

While perhaps an indication he is healthier than expected, all Liverpool fans should be keeping every part of their anatomy crossed we see no aggravation of an injury.

It’s not quite been the joyous opening a 25-match unbeaten run would suggest having won roughly just over half the games in the league, with some frustratingly avoidable draws.

Liverpool have two weeks to draw up solutions, refresh and regroup. It won’t be nice sitting on a defeat but Klopp and his team have more time to analyse.