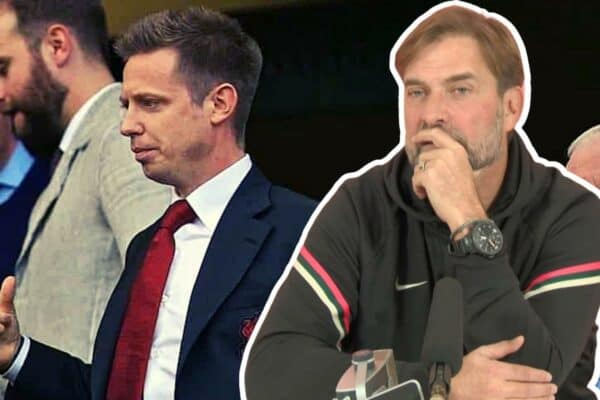 Edwards has confirmed his intention to leave Liverpool on the expiry of his contract on June 1, with the club promoting his current assistant, Ward, to take his place.

It is a smart decision, allowing Ward – a man who has worked in various roles for the Reds since 2012 – to learn while working alongside Edwards before taking up his duties on a full-time basis.

There have been concerns from outside Anfield that the operation will be affected by Edwards’ departure, but Klopp has full faith in the new man.

“I’ve known Jules for a long time. Jules is longer than I am in the club, so I met him on my first or second day probably,” he told reporters on Friday.

“Since I’ve known him, he’s an absolute expert in all the things around player scouting, transfers, all these kinds of things.

“He worked very closely together with Michael Edwards in the past, so I don’t think there will be any kind of rusty things to overcome.

“It’s just a normal thing in life and business, that people leave the position they were in for a few years and then somebody else has to take over.

“But in this specific case, the person who takes over did parts of the job already in the past – how it is when you get promoted from what you do to the assistant sporting director, to the sporting director.

“I think it will be a very smooth takeover.”

It still seems strange to discuss the impact of a change in the boardroom, but the role of the sporting director – or director of football – has become increasingly important.

The role is largely influenced by those seen in successful clubs abroad, such as Borussia Dortmund, with whom Klopp worked alongside long-serving sporting director Michael Zorc (pictured, right).

While Klopp insisted “it’s still a completely different role in England than it is in Germany,” he revealed that it was his input that saw Edwards formally appointed sporting director in 2016.

“When I came here, I wanted a sporting director,” he continued.

“Michael had a similar job before, but he got the job in the end, let me say it like this, because I don’t want to deal with players’ agents on a daily basis.

“I really think that takes energy away from the really important stuff you have to do.

“I speak to players constantly, I do that, but it’s not the right thing that a manager speaks to players about contracts.

“In my understanding, it’s not. Because even when a player is very important for you, and then you give him the offer he didn’t want to hear – like you say ‘OK, you can earn this or that’ and he says, ‘well I think I’m [worth] much more’.

“These kinds of conversations should not happen between the person who is responsible in all football things. So you need somebody in between that.

“For the player it’s the agent, for the club it’s the sporting director, in my understanding. That’s it.”

It is clear that Edwards, and in the future Ward, has worked to make Klopp’s life easier in his role as manager, allowing him to focus on the day-to-day priorities within his squad.

Klopp does liaise frequently with the club’s recruitment staff when it comes to signings and sales, however, with the 54-year-old recalling the days of the transfer committee.

“Ah yes, in my first press conference we spoke about the transfer committee!” he said.

“That worked out pretty well since then, I have to say. But it’s still the same.

“But when it was like this in the past, that the manager did all these kinds of talks with agents and players…my day is pretty full, I don’t know exactly when they did it.

“Then maybe I’m not skilled for that and I’m the only one who thinks it’s not right to do that. But for us, it works out how we do it.”